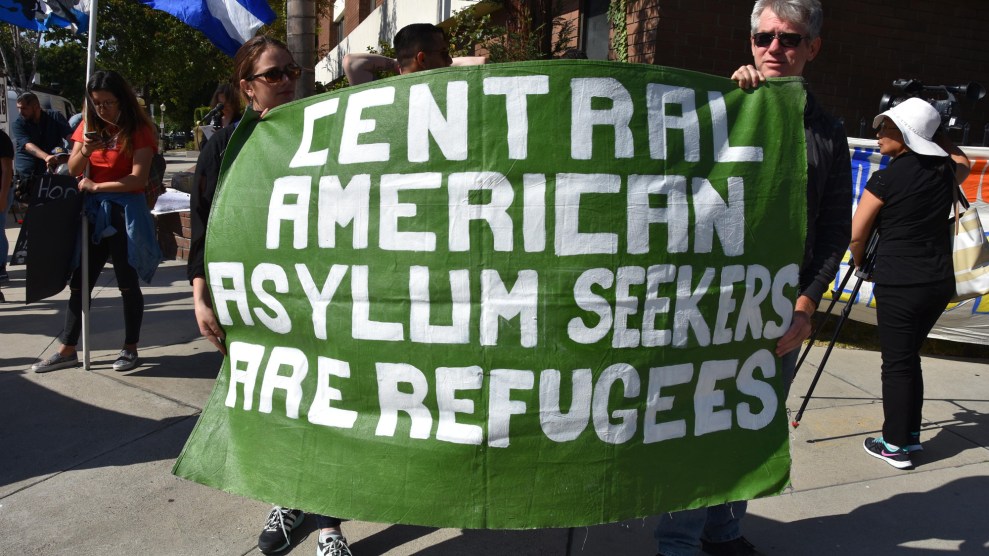 For several years, the Obama administration has treated the influx of Central American migrant families and children as a temporary surge, one that can be controlled with aggressive messaging campaigns and the threat of quick deportations. But a new policy, announced by the State Department on Tuesday, signals a growing recognition that these migrants—many of whom are fleeing extreme violence—cannot be so easily deterred.

The new plan calls for expanding the opportunities for Central Americans to apply for asylum in the United States from their home countries. Minors who qualify for resettlement under an existing initiative known as the Central American Minors (CAM) program—created to keep children from risking the dangerous journey north to the US-Mexico border—can now be accompanied to the United States by relatives and guardians who have taken care of them in their home countries. That includes parents, grandparents, adult siblings, and other caretakers. Separately, Costa Rica has agreed to serve as a temporary safe haven for both children and adults who have already been partially screened but face immediate danger.

“We’ve been gradually seeing the administration take steps to recognize that this really is a refugee crisis,” said Wendy Young, president of the immigrant rights group Kids in Need of Defense, adding that these changes are “a reflection that the administration has recognized that these numbers are the new normal.”

That’s something advocates realized years ago. As early as February 2014, Young told Mother Jones in an interview, “This is becoming less like an immigration issue and much more like a refugee issue. Because this really is a forced migration. This is not kids choosing voluntarily to leave.”

“[The feds] were really insistent for the first several years that this was a purely economic issue or that general violence didn’t rise to the level of persecution. I think that is evolving.”

The surge in Central American minors peaked in 2014, when roughly 69,000 children were apprehended at the border—up from about 4,000 in 2011. According to Michelle Brané, director of the migrant rights and justice program at the Women’s Refugee Commission, the government’s main response to the child migrant crisis was to try to deter future migration by ramping up its detention capacity and fast-tracking deportation proceedings for Central Americans. South of the border, it launched a public information campaign discouraging potential migrants from making the journey to the United States. At the same time, the administration got Mexico to agree to step up immigration enforcement to stop migrants before they reach the US border. This year, multiple deportation raids have targeted Central American families. A report released today by the International Crisis Group concluded that these policies only pushed the migrant crisis further south and empowered the criminal networks that exploit vulnerable refugees.

“In the very beginning, we saw complete denial and refusal to acknowledge any eligibility for refugee status,” Brané said. “They were really insistent for the first several years that this was a purely economic issue or that general violence didn’t rise to the level of persecution. I think that is evolving.”

The first step in that evolution was the creation in December 2014 of the CAM program, which allowed certain Central American children to apply for refugee status in the United States from their home countries. In January, the State Department announced that it would create at least 6,000 new slots for Honduran, Guatemalan and Salvadoran refugees in the United States and would start screening applicants in Central America.

But those programs struggled to get off the ground. As Mother Jones reported last October, only 11 children out of the first 4,600 CAM applicants had been resettled in the United States—more than a year after the program launched. After facing widespread criticism, the program has since picked up the pace, with now more than 600 kids relocated to the United States and another 2,800 approved for resettlement. Even so, Deputy Homeland Security Advisor Amy Pope admitted Tuesday that it was not enough.

“Our current efforts to date have been insufficient to address the number of people who may have legitimate refugee claims, and there are insufficient pathways for those people to present their claims for adjudication,” Pope said on a press call Tuesday.

Still, Brané says that the number of people helped by this most recent set of policy changes is likely to be a “drop in the bucket” compared to the number of people showing up at the border. For example, the Costa Rica safe haven program is designed to accommodate 200 individuals for a period of six months. That’s a fraction of the 28,878 family members who were apprehended at the US-Mexico border in the first six months of this fiscal year. Even the CAM program is severely limited by the fact that children must have one parent lawfully residing in the United States in order to qualify.

In order to better deal with the flow of migrants, advocates say the administration still needs to expand its ability to efficiently and fairly process the asylum claims of people showing up at the border, not just those who apply from refugee status from their home countries.

“Already by 2012, it was clear to us that there was a situation in Central America that was leading to increased refugee flows,” Brané said. “The government is now seeing that, which is great…Now let’s build on that.”