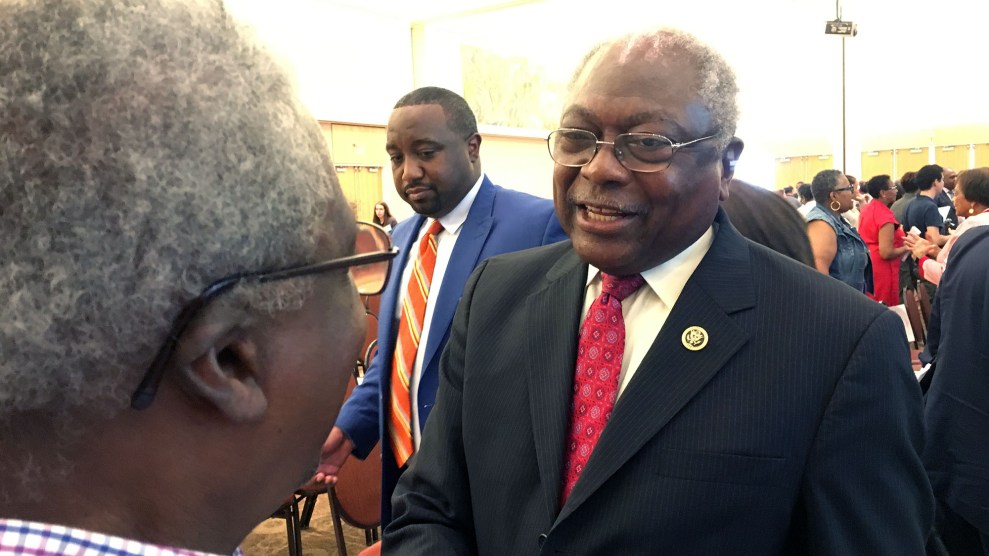 On Monday morning in Cleveland, as the Republican National Convention prepared to convene and nominate Donald Trump for president, a group of Democratic lawmakers and lawyers hosted their own event a mile up the road to highlight Republican efforts to curtail the right to vote around the country—and to make sure that all Democrats who are eligible to vote turn up to cast a ballot.

“This is the most consequential election in my lifetime,” said Rep. Jim Clyburn (D-S.C.). He stressed the importance of this election in terms of the Supreme Court, immigration and the DREAM Act, women’s rights, and voting rights. He urged the nearly 100 people attending the rally to vote, even if their preferred candidate hadn’t made it through the primaries.

Ohio has been especially hard hit by efforts to restrict voting. In late May, a federal judge blocked a law that halted state Republican efforts to curtail “Golden Week,” a week during which voters can register to vote and submit early ballots at the same time. That measure was one of at least nine bills proposed in the Ohio legislature since 2013 that made it harder to register to vote or have a ballot counted in the case of an innocent mistake such as transposing numbers in a zip code or misprinting one’s birthday on a voter registration form. One bill would have pulled state funding to public universities if those schools provided students with a voter ID.

Clyburn was joined by Rep. Bennie Thompson (D-Miss.), Ohio State Rep. Stephanie Howse, former US Department of Justice voting rights lawyer Julie Fernandes, Mike Brickner of the ACLU of Ohio, and Camille Wimbish, the election administration director for Ohio Voice, an advocacy organization for underrepresented populations. The group gathered for “the United State of Voting,” a town hall meeting on voting rights hosted by Rep. Marcia Fudge (D-Ohio) at Cleveland State University, about a mile from the Quicken Loans Arena where the convention is being held. Moderated by MSNBC’s Joy Reid, the event focused on efforts in Ohio and other places around the country to limit access to the polls, particularly for African Americans and other minority communities.

Access to the ballot is a key issue in 2016. It’s the first presidential election since the Supreme Court gutted the pre-clearance provision of the Voting Rights Act, which required some states with a history of racial discrimination to submit to federal review before making any changes to voting laws or procedures. According to the Brennan Center for Justice, 17 states will have new voting restrictions in place for the first time in a presidential election this fall. These restrictions include requirements for voter IDs, reductions in early voting times, and restrictions on counting ballots that were cast in the wrong precinct.

This year, a federal judge upheld a sweeping set of voting restrictions that North Carolina passed in 2013, which local advocates said disenfranchised minority communities. In Texas, a federal appeals court is set to rule any day on whether state Republicans can push through a strict voter ID law. And in Virginia, state Republicans are suing the governor after he used an executive action to restore the right to vote for more than 200,000 convicted felons.

Several panelists noted that because elections are run by the states, many restrictions were passed in state legislatures. Ohio State Rep. Stephanie Howse said that in her state, party registration is divided equally, but representation in the state legislature is roughly two-thirds Republican overall. She said that was the reason why a series of bills aimed at restricting the right to vote have been brought up in the legislature over the last few years, and why attempts to work across the aisle to prevent harmful voting restrictions were unsuccessful.

Fernandes, the former Justice Department lawyer, said helping voters is about changing the mindset. “What is voting anyway?” she asked. “Is it a right, or is it a privilege?”

Clyburn said that to him, it’s clear where congressional Republicans stand. “As recently as yesterday, I heard a few of my friends on the other side emphasizing that voting is not a right, it’s a privilege,” he said. “That is being emphasized throughout this entire campaign.”