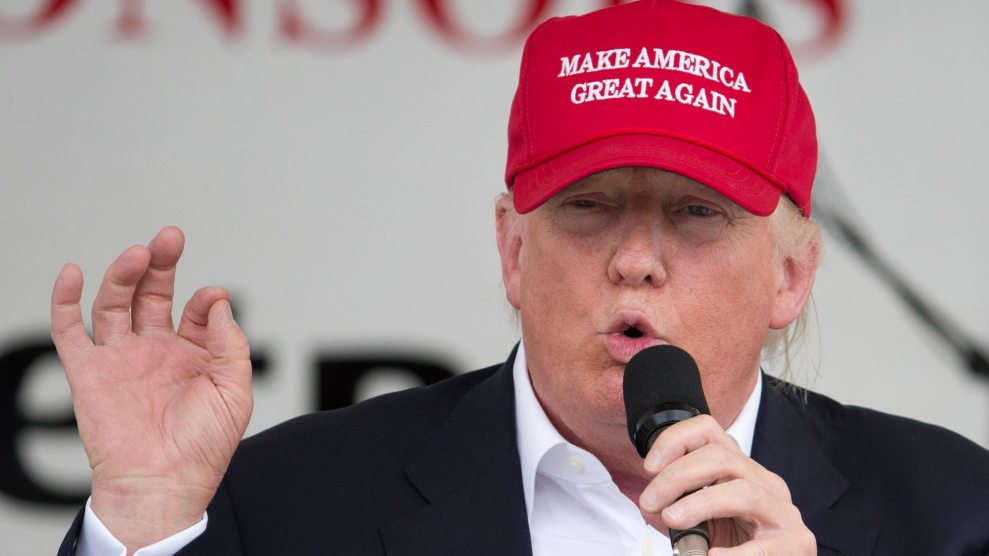 When Donald Trump recently praised former Iraqi President Saddam Hussein at a rally in North Carolina, it was not his first time expressing admiration for dictators and despots. In the past, he has complimented North Korea’s Kim Jong Un and Russian President Vladimir Putin. His top political operative, Paul Manafort, a veteran Republican lobbyist and consultant, has made millions of dollars working the system on behalf of corporations seeking government favors as well as Third World strongmen and kleptocrats.

In fact, the two men have been involved with an unusual number of the world’s autocrats and despots. Here are a few whom Trump has praised or for whom Manafort has worked, and some of their most notable abuses of power.

Former Iraqi President Saddam Hussein: During Saddam’s reign in Iraq from 1979 to 2003, human rights groups documented numerous instances in which the regime engaged in brutal torture, systematic rape, arbitrary executions that included beheadings, and other abuses. After Saddam was captured in 2003 by US forces, the New York Times estimated that his regime had contributed to approximately 1 million deaths in Iraq’s prisons and in the war he had launched against Iran.

Trump connection: At a rally in North Carolina in July, Trump said of Saddam: “He was a bad guy—really bad guy. But you know what he did well? He killed terrorists. He did that so good. They didn’t read them the rights. They didn’t talk. They were terrorists. It was over. Today, Iraq is Harvard for terrorism.”

Russian President Vladimir Putin: Since returning to power in 2012, Putin has passed laws and instituted policies that crack down on freedom of expression and assembly. A 2012 law targeted groups that accept foreign funding—often NGOs with social justice causes. Authorities have arrested hundreds of activists at opposition rallies across the country. Under Putin, the Russian parliament also unanimously passed several pieces of anti-gay legislation, including the “gay propaganda” bill, passed in the run-up to the 2014 Sochi Olympics, that emboldened vigilante gangs to torment gay people. Some Russia researchers and Putin opponents suggest a link between Putin, one of his allies, and the 2015 killing of Boris Nemtsov, a prominent opposition activist, as well as the deaths of other opposition figures.

Trump connection: “I think Putin’s been a very strong leader for Russia,” Trump said during a GOP debate in March. “He’s been a lot stronger than our leader, that I can tell you.” A few months prior, Trump said in an interview with ABC, “In all fairness to Putin, you’re saying he killed people. I haven’t seen that. I don’t know that he has.”

Former Libyan President Muammar Gaddafi: Gaddafi’s 42-year reign in Libya was marked by the arrest, imprisonment, disappearance, or torture of thousands of government critics, protesters, and civilians perceived to be in cahoots with the political opposition. The regime also sanctioned televised public hangings and mutilation of political opponents. In 1996, security forces fatally shot more than 1,000 inmates at a Libyan prison.

Trump connection: In a February GOP debate, Trump said, “We would be so much better off if Gaddafi were in charge right now.”

North Korean leader Kim Jong Un: Last week, the US government issued sanctions against the North Korean leader as well as 10 other North Korean officials for their complicity in human rights abuses. “Under Kim Jong Un, North Korea continues to inflict intolerable cruelty and hardship on millions of its own people, including extrajudicial killings, forced labor, and torture,” said Adam J. Szubin, acting undersecretary of the Treasury for Terrorism and Financial Intelligence, in a press release. The Treasury Department singled out Kim Jong Un’s Ministry of State Security, which maintains a network of prison camps that hold 80,000 to 120,000 people. Egregious abuses in these state-run camps are common, according to the Treasury Department, and include “torture and inhumane treatment of detainees during interrogation and in detention centers. This inhumane treatment includes beatings, forced starvation, sexual assault, forced abortions, and infanticide.”

Trump connection: At a January rally in Iowa, just days after North Korea said it had successfully tested a hydrogen bomb, Trump said, “If you look at North Korea, this guy, he’s like a maniac, okay? And you got to give him credit. How many young guys—he was like 26 or 25 when his father died—take over these tough generals and all of a sudden, you know, it’s pretty amazing when you think of it. How does he do that? Even though it is a culture, and it’s a culture thing, he goes in, he takes over, he’s the boss. It’s incredible.”

Syrian President Bashar al-Assad: According to a 2016 Human Rights Watch summary on Syria, Assad’s government has been carrying out “deliberate and indiscriminate” attacks on civilians while doing little to end the ongoing civil war. “Incommunicado detention and torture remain rampant,” Human Rights Watch noted. A UN Human Rights Council report found that many detainees in Syrian prisons had been beaten to death or died as a result of injuries sustained during torture or due to inhumane living conditions. “The Government has committed the crimes against humanity of extermination, murder, rape or other forms of sexual violence, torture, imprisonment, enforced disappearance and other inhuman acts,” the UN concluded.

Trump connection: On a June 2015 episode of The O’Reilly Factor on Fox News, Trump discussed his Middle East policy shortly after announcing his run for president. “So we’re helping the head of Syria, who is not supposed to be our friend,” Trump said, “although he looks a lot better than some of our so-called friends.”

Ousted Ukrainian President Viktor Yanukovych: Yanukovych served as Ukraine’s president from 2010 to 2014 before being ousted in February 2014, following mass protests against his regime in the Ukrainian capital, Kiev, in the wake of Russia’s annexation of Crimea. His rule was marked by a slide from democracy to a more authoritarian style of government. Yanukovych’s regime jailed officials of the previous administration, including the former prime minister. Following Yanukovych’s ouster, a warrant was issued for his arrest due to involvement in the “mass killing of civilians,” related to the deaths of at least 82 people, primarily protesters, in Kiev earlier that winter.

Trump connection: Manafort was first hired to work for Yanukovych on his 2004 presidential campaign. Yanukovych was momentarily victorious but lost power after allegations of massive electoral fraud led to the Orange Revolution and a revote in which Yanukovych lost. He was appointed prime minister in 2006 and soon hired Manafort again to help his party win that year’s parliamentary elections. Manafort then stayed on as a general consultant. He worked on Yanukovych’s messaging and brand, trying to help the strongman and his party improve their image in the eyes of the Ukrainian people. After the 2010 presidential election, which Yanukovych won, Manafort continued working for him as an adviser. A former associate familiar with Manafort’s earnings told Politico that his total pay from work with Yanukovych ran into the seven figures.

Jonas Savimbi, former Angolan guerilla army leader: Savimbi and his guerilla army, UNITA (National Union for the Total Independence of Angola), tried for decades to overthrow the Angolan government. In the process, they maimed or killed tens of thousands of civilians with land mines, and a Human Rights Watch report described men being forcibly recruited to fight, girls held in sexual slavery, and random killings or beatings of suspected government sympathizers.

Trump connection: With Angola in the middle of a civil war in 1985, Savimbi paid Manafort’s DC lobbying firm $600,000 to help him get funds and other support from the US government for UNITA’s work to overthrow the government. The lobbying effort led Sen. Bob Dole to encourage the United States to send additional arms to UNITA and the Reagan administration to funnel $42 million to UNITA from 1986 to 1987. Several sources, including Sen. Bill Bradley, have credited Savimbi’s continued willingness to pay large sums to Manafort’s firm, and the continued US funds that Manafort’s firm lobbied for, with delaying a cease-fire and protracting the violence in Angola.

Mobutu Sese Seko, former ruler of Zaire (now the Democratic Republic of Congo): Mobutu seized power of the Democratic Republic of Congo in a 1965 coup. He renamed the country the Republic of Zaire in 1971 and would remain its president until 1997. Mobutu established a political structure that kept most power in his hands, and he used his power to steal a fortune from the state for himself, while the rest of the country floundered economically. His regime was also marked by brutal treatment of its citizens: widespread torture of political opposition, illegal searches, military looting, beating, rapes, and arbitrary arrest and detention, often without a fair trial.

Trump connection: In 1989, Mobutu hired Manafort’s firm to orchestrate a PR campaign to clean up his image. Mobutu paid the firm $1 million a year for this service.

Sani Abacha, former president of Nigeria: Abacha became the head of Nigeria in 1993, when he overthrew a transitional government. The following year, he formally assigned absolute power to his regime, issuing a decree that placed his jurisdiction above that of the courts. His rule ended in 1998 with his death, but in the intervening years Abacha’s regime engaged in brutal treatment of Nigerian citizens: He arrested or executed his opponents, shut down democratic institutions, and reportedly stole nearly $500 million from the government for his own personal coffers.

Trump connection: Abacha hired a firm run by Manafort in 1998 to help him orchestrate a PR campaign that would convince Americans that he was the leader of “a progressive emerging democracy,” wrote the New York Times in 2000. The Times reported that the Abacha account was handled primarily by Manafort himself.