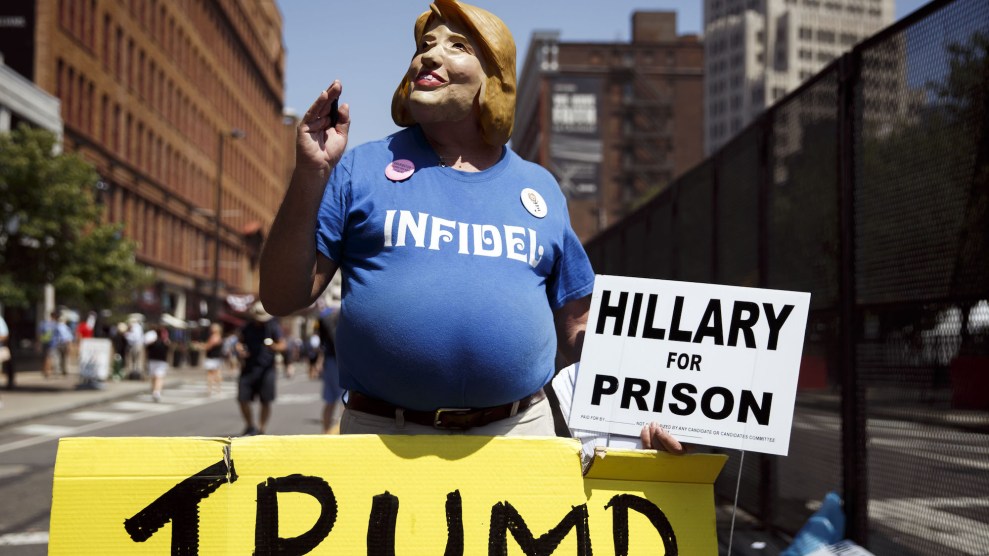 This is when the Republican National Convention turned dangerous. Hundreds of Republican delegates on the floor of the convention during the official proceedings were shouting that the opposing candidate, Hillary Clinton, should be thrown in jail. The GOPers weren’t merely urging her defeat in November. They were demanding she be treated as a criminal and sent to the hoosegow. This moment marked the culmination of a meme on the right: that Clinton is not a legitimate leader and that her election would not be legitimate. By embracing this theme and placing it center stage at Trumpalooza, Donald Trump and the GOP were undermining, if not threatening, democratic governance.

It’s not news that the Trump movement has been laced with violence and extremism—and it has hit a fever pitch at the convention this week. On Tuesday night, minutes after the “lock her up” chants, defeated GOP presidential candidate Ben Carson linked Clinton to Lucifer (because of a college paper she wrote on leftist organizer Saul Alinsky). And on Wednesday morning, the news broke that a prominent Trump supporter, Al Baldasaro, had declared on a radio show that Clinton deserved to “be put in the firing line and shot for treason.” Baldasaro had repeatedly spoken at Trump rallies during the primary campaign, and when the New Hampshire GOP delegation cast its votes for Trump during the roll call vote on Tuesday evening, he stood next to Corey Lewandowski, Trump’s former campaign manager, as Lewandowski enthusiastically read off the tally for Trump. And Trump once referred to Baldasaro as “my favorite vet.” So here we have a top Trump champion advocating murderous violence.

The call for Clinton’s execution is not as shocking as it should be. (Some Trump voters are down with this.) Hillary’s demonization has been the central organizing principle of the convention. (On Tuesday night, there were far more anti-Clinton speeches than pro-Trump presentations.) Delegates trot about Cleveland wearing “Hillary for Prison” T-shirts and badges. Vendors tell me these are the best-selling merch. On the floor, delegates wave “Hillary for Prison” signs, and no convention staffers stop them. Trumpers routinely state as a fact that Clinton has committed treason—they need not explain how: Benghazi, the emails, the Clinton Foundation, whatever—and ought to be punished for her crimes. The only reason she is not, they say, is that President Barack Obama and the corrupt federal government are protecting her. It’s all one big evil plot.

Within the ranks of Trump Nation, Clinton’s guilt has long been a given. In 2014, Roger Stone, a longtime Trump adviser, tweeted, “Hillary must be brought to justice—arrested, tried and executed for murder.” At a pro-Trump rally he helped organize in Cleveland on Monday, Stone, after saying he had just met with Trump staffers, declared that Clinton had mounted a cover-up in the death of Vince Foster, a White House aide who committed suicide during the Bill Clinton presidency. Stone stated as a fact that she had ordered Foster’s body secretly moved from the White House to a park outside Washington. (The official investigations of the time concluded that Foster had killed himself in this park.) “We demand the prosecution of Bill and Hillary Clinton for their crimes,” Stone shouted, to the cheers of the crowd. He declared the Clintons had committed “treason.”

At this event, Alex Jones, a prominent conspiracy theorist and 9/11 truther, decried Hillary Clinton as part of a secretive global conspiracy seeking world domination. He shouted his catch phrase: “The answer to 1984 is 1776.” This was essentially a message of violence—a warning that citizens might have to take up arms against the governing elite to prevent tyranny. In other words, if Clinton triumphs, be ready to lock and load. (This has long been a deeply held notion on the right: We must keep our guns in case one day it is necessary to fight the wicked federal government.)

Trump has encouraged all this. By regularly referring to Clinton as “Crooked Hillary,” he signals that she deserves indictment and that a Clinton victory in November will not be acceptable. He has denounced the “rigged system” over and over. Well, what happens when a “rigged system” yields an outcome in which a “crooked” politician who ought to be imprisoned ends up in the White House? How can Trump and his followers abide by that? How could any patriot stand by and allow such a travesty to occur?

Trump’s convention has given voice to the most extremist portions of the right. It has sharpened the partisan divide. It has cast Clinton as a figure who cannot be allowed to take the White House—even if somehow she collects more votes (or the “rigged system” says she collects more votes). Trump has established a term sheet for this election that establishes an alarming dichotomy: If he wins, the process worked; if she wins, the game is corrupt and the results cannot be trusted. This is a perilous moment. There is talk of killing a presidential nominee and a foundation is being set for delegitimizing an election. And the convention is only halfway over.