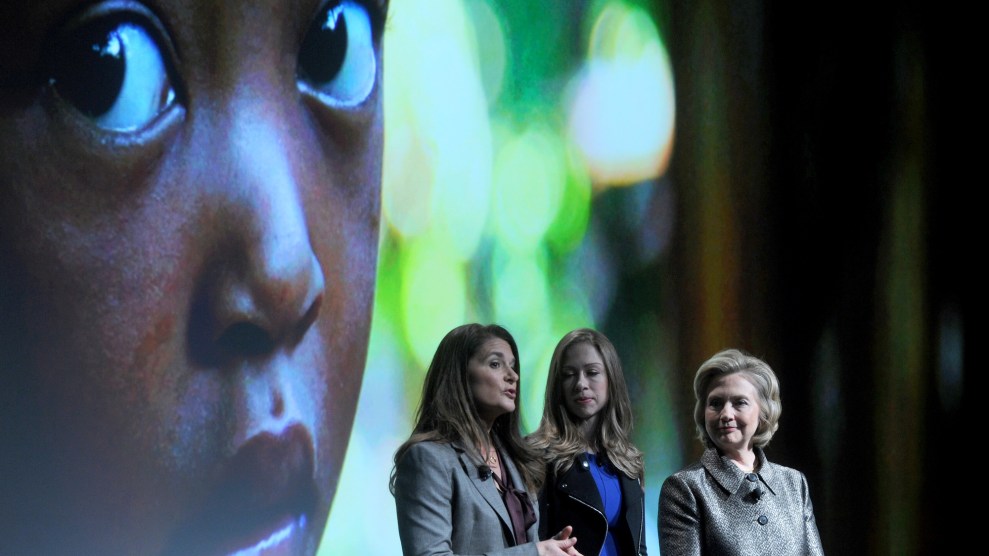 Hillary Clinton, Chelsea Clinton, and Melinda Gates spoke last year after the release of a report by the Clinton Foundation and other groups on women's equality.Dennis Van Tine/ZUMA

Another Hillary Clinton shitstorm was kicked up when the Associated Press reported on Tuesday that during the Democratic presidential nominee’s tenure as secretary of state, she met several dozen times with donors to the Clinton Foundation. Hot damn, the Trumpsters declared, here’s evidence of the corrupt, pay-to-play ways of the Clinton mob. Donald Trump called for the foundation to be shut down. Rudy Giuliani could defend his accusation that the Clinton Foundation was “racketeering,” a harsh legal term with which the former prosecutor must be familiar. And media commentators, including the Washington Post‘s Chris Cillizza, proclaimed this revelation a blow to Clinton, fixating on the supposedly awful optics.

Most of the reaction was overreaction. The article contained no real allegations—let alone evidence—of any corruption or breach of ethics. Most of the meetings cited were the sort of one-on-ones a secretary of state could be expected to hold, whether or not the person in the room with Clinton was a donor to the foundation. The story dwelled on a meeting she had with Nobel Prize winner and foundation donor Muhammad Yunus, a pioneer in microlending Clinton has known for 30 years. In one instance, the article cited a meeting Clinton held with the head of an AIDS foundation, which was developing projects in Africa with the State Department. And OMG—this foundation also gave to the Clinton Foundation, which has long been involved in the global fight against AIDS.

There may have been a need for a better firewall between Clinton and the foundation when Clinton was the nation’s top diplomat, but the AP article focused on a small issue and skipped a bigger subject: assessing what the Clinton Foundation has accomplished. And there may be a good reason why much of the coverage of the foundation has zeroed in on side matters, because it’s darn hard to evaluate what the meganonprofit has done.

This is true for many nonprofits. Charities can be evaluated on their financials, based on the annual tax form they file, regarding such key issues as reporting transparency, compensation, and the ratio of administrative and fundraising expenses to program service expenses. Still, these numbers do not tell you what the nonprofit has actually achieved. Many charities put out glossy annual reports that tout their successes. But there usually are no independent audits of these claims. Last year, Brian Mittendorf, a professor of accounting at Ohio State University’s Fisher College of Business, wrote an article for the Chronicle of Philanthropy explaining how the Clinton Foundation could be evaluated in comparison to other foundations, though he noted there were few charities quite like the Clinton Foundation. He makes clear that this is a rather complicated process.

A few months ago, I asked Mittendorf if a layperson could figure out whether the Clinton Foundation, which has raised and spent about $2 billion with the mission of helping people throughout the world, was doing a good job. He responded:

Nonprofits are struggling with developing a systematic (and verifiable) way of measuring results, and there has not been substantial progress, leaving “where did the money go” as the more accessible question. Many organizations will report on results, but this tends to be more marketing than systematic evaluation. The Clinton Foundation has discussed their investment in developing measurable outcome assessment, but I am not familiar enough with their efforts to speak to the effectiveness of them.

What makes the Clinton Foundation even more difficult to assess in terms of results is both their wide array of initiatives and the more subtle ways they seek outcomes. Some initiatives, like Clinton Health Access Initiative, are a bit easier to measure in that one can assess the value of pharmaceuticals the organization was able to obtain for distribution to areas in need. (As it turns out, CHAI is also easily the [foundation’s] largest initiative.) Other initiatives, like Too Small to Fail or Clinton Climate Initiative are difficult to measure in the way of results since they largely try to mobilize private & public sectors to change public perceptions and enact change. [The Clinton Global Initiative], which largely works as a fundraising matchmaker, is the most unique since it’s hard to know what would have been donated without CGI, and what was ultimately achieved by the beneficiary organizations.

Mittendorf suggested it might be best to zero in on the Clinton Health Access Initiative, now a spin-off of the Clinton Foundation, as an example of the foundation’s activity. If it’s effective, he noted, that might be a sign that the larger organization is, too.

But that’s not an easy task. The 2015 annual report of the CHAI, naturally, tells an inspiring story. The outfit has helped more than 11.8 million people in more than 70 nations gain access to low-cost HIV medicines (saving the global health system billions of dollars). It has distributed vaccines that annually helped save 138,000 lives. In 2015, it distributed 10.5 million long-acting reversible contraceptives in low-income nations and 13.7 million vials of anti-malaria medicine that allowed 2.1 million people to be treated and saved 52,000 lives. The initiative also promoted midwife mentoring in Ethiopia, developed a program to deal with child malnutrition in several nations, and helped amass supplies of medicines to treat pneumonia and diarrhea in India, Kenya, Uganda, and Nigeria. That’s some story, if accurate. Has anything Trump ever done helped as many people?

Yet it’s hard to know how much of this really happened. Maybe all of it did. But there are no outside evaluations of these assertions. Mittendorf explained, “This is not unique to the Clinton Foundation—most charities engage in activities that are hard to objectively measure in terms of accomplishments (never mind, audit). What we end up with is annual reports that offer a rosy picture but little sense of what worked and what didn’t.”

How frustrating. I asked Mittendorf if he could help assess the initiative’s work. He replied:

What I can comfortably say from the CHAI financials is that they do have measurable spending on key objectives and since they have secured pharmaceuticals and other supplies, there are some key outcomes they can quantify…At the same time, it is readily argued that while they are clearly ambitious, they are not the most streamlined organization in the arena.  As one example, note that CHAI employed 56 people with pay over $100,000; in contrast, Task Force for Global Health had 25, Brothers Brother Foundation had 1. This is just a snippet, but it may give a sense that the organization does have more people than other organizations with similar objectives. If you want to look at some other things, conferences, travel, personal costs as a % of the expenses (as compared to peer organizations) may give a sense for how the organization seeks to achieve its objectives. I know these are rather equivocal statements, but I suspect you will see similar things as you examine the organization: clear successes but also bureaucracy in place.

The bottom line? Well, there may not be one. If the CHAI has accomplished only a portion of what it purports, it has done tremendous good and saved or improved the lives of millions. Could it have scored more successes with the resources at its disposal? Has it mounted projects that have failed? We don’t know. Does it have a lot of highly paid staff? Yes, it does. But maybe that’s justifiable, if the results are strong enough. (None of the Clintons are on the payroll—and that’s true for the Clinton Foundation, too.) Still, rendering an ultimate verdict is tough. A journalist might have to travel to a dozen or more countries and interview health care providers and recipients on the ground to determine whether the annual report’s claims fully match reality.

“Measuring successes in the other initiatives of the [Clinton Foundation],” Mittendorf notes, “is likely to be even more delicate since the outcomes are more ‘fuzzy’ and often entail shifting perceptions, altering policies of governments, developing partnerships, etc.”

The Clinton Foundation is now a political football. Giuliani compares it to the mafia. Trump, who has barely even donated to his own foundation (and who has made contributions to the Clinton Foundation), has called for the organization to cease operations immediately, without apparent regard for what would happen to the people it serves. Conservative trolls on and off Twitter hysterically insist it is a Hillary Clinton crime scene and nothing but a scheme for Clinton self-enrichment. (The foundation has announced that if Clinton wins, her husband will leave its board and the foundation will cease accepting money from foreign and corporate sources. Its president, Donna Shalala, also said it will shrink and spin off programs if Hillary Clinton is elected.)

Yet in the real world, the foundation and its initiatives have endeavored for years to assist millions. It’s a pity that, as is often the case with many nonprofits, the results of its high-minded efforts are not fully verified in a manner that could transcend agenda-driven political squabbling.