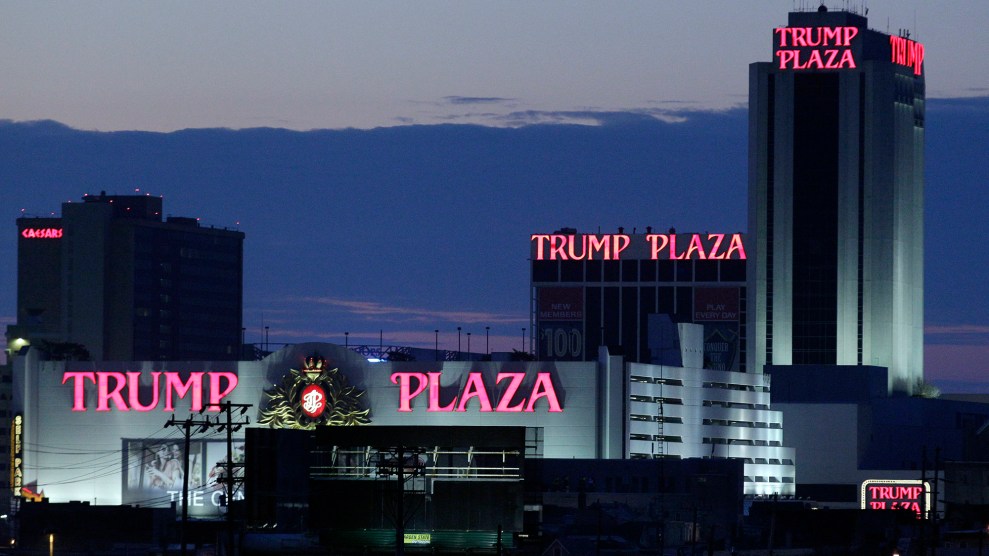 When confronted with his very poor favorability numbers among female voters, Donald Trump has repeatedly bragged about the women he has hired at his companies, particularly in executive roles. “I’ve hired tremendous numbers of women,” Trump said in an interview with conservative radio host Charlie Sykes in March. “Women are in my highest executive positions.”

But a review of public filings reveals few women have held senior roles in the businesses that have at times been most closely associated with the Trump brand: his casinos.

Trump opened his first casinos in Atlantic City in the 1980s, starting with Trump Plaza in 1984 and Trump’s Castle in 1985. In 1990, he opened his biggest casino yet, the Taj Mahal. But Trump’s casinos never thrived. In 1991 and 1992, all three went through bankruptcy, and Trump remained on the hook for $100 million in debt. According to a New York Times investigation of his record in Atlantic City, Trump ultimately unloaded his debt by taking his casinos public in 1995. For more than a decade, from 1995 to 2009, Trump ran his three Atlantic City casinos and one in Indiana under the publicly traded Trump Hotel and Casino Resorts (THCR) and later Trump Entertainment Resorts (TER).

As public companies—unlike the privately held Trump Organization—THCR and TER had to file reports with the Securities and Exchange Commission. Mother Jones examined those filings to determine how many women were in executive roles at THCR, TER, and their casinos. In filings from 1996 to 2008, we identified 59 executives (not including Trump himself). Of those, six were women—10 percent of the total. None of these six served on the THCR or TER board of directors.

The dearth of female executives at Trump’s casinos appears to undercut his claim to have hired many women in top roles, although it reflects broader trends in the casino industry, which is dominated by men. “I just don’t think there were that many women that went into gaming” outside of working on the casino floor, says H. Steven Norton, who has worked in and consulted for the gaming industry for decades. As for Trump’s six female executives out of 59, Norton says the number “doesn’t shock me.” One of those six executives, Virginia McDowell, who worked for TER from 2005 to 2007, now runs a nonprofit aimed at supporting women in the gaming industry. A spokeswoman for her group, Global Gaming Women, said in an email that “women are underrepresented in the management ranks since approximately 50% of industry employees are women.” McDowell declined to comment on Trump.

Outside of his casino empire, Trump did hire women for prominent roles in the Trump Organization. They included Barbara Res, who oversaw the construction of Trump Tower. But Res and other female employees have said they endured unwelcome comments from Trump about their physical appearance.

Trump did handpick a couple of women to work for his Atlantic City ventures: his first wife, Ivana, and later his daughter Ivanka. Ivana worked as president of Trump’s Castle in the 1980s—for a $1 annual salary. Trump later regretted hiring her because, as he wrote in his 1997 book, The Art of the Comeback, “work was all she wanted to talk about.” In 2007, according to an SEC filing, Trump brought his daughter Ivanka onto the board of TER. At the time, she was the only woman to serve on the board. (She was not considered an executive of TER.) Then 26, Ivanka was already vice president of development and acquisitions at the Trump Organization. During her first year as a TER board member, she made $188,861.

In February 2009, with Trump’s casino business days away from filing for its fourth bankruptcy, Trump and his daughter both walked away from the company. After it emerged from bankruptcy, according to 2011 filings, the entire board had been replaced. Still, there were no women on the board.