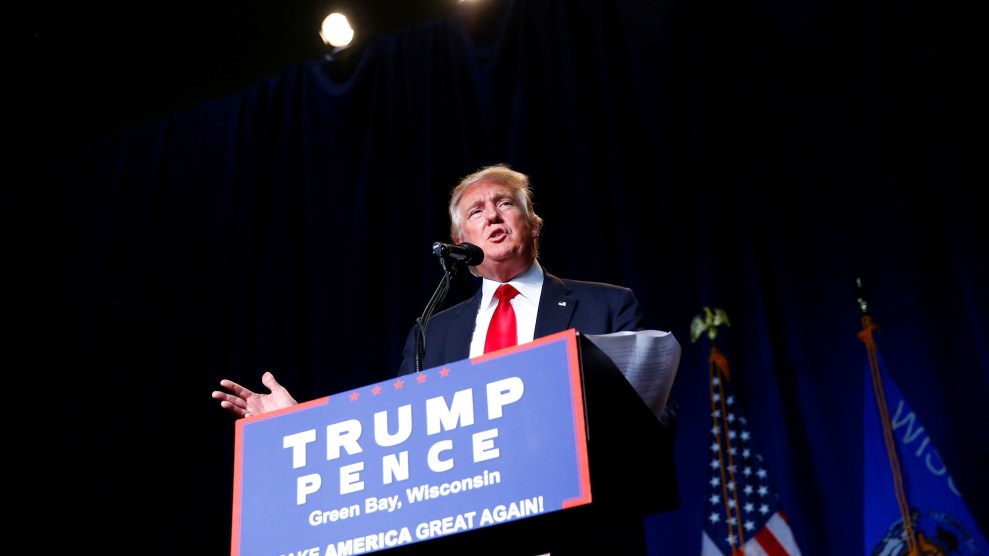 Donald Trump tried to reset his campaign yet again with a Monday visit to Detroit and a promise of an economic agenda. His speech at the Detroit Economic Club was light on details and full of assurances that his campaign website would soon feature specifics on how he’d tackle the economy. But what details did exist undercut his pledge to make life better for low- and middle-income families, instead serving largely to keep more money in the pockets of the wealthy people in his own income bracket.

The centerpiece of Trump’s new plan is a retooled tax system. “Nothing would make our foreign adversaries happier than for our country to tax and regulate our companies and our jobs out of existence,” Trump said. He had already laid out a vision for rewriting the tax code during the Republican primary, one whose benefits tilted heavily toward a lower tax burden for people earning more than $1 million per year. His campaign website tried to erase his previous plan ahead of the Monday speech, though web archives still retain information on that initial proposal.

During the primary, Trump had proposed four tax brackets, with rates of 0, 10, 20, and 25 percent. While his new plan lacks details, on Monday he said he’d now seek to introduce only three brackets, taxed at 12, 25, and 33 percent. That represents a tax hike from his earlier proposal, but it’s still a major tax cut from current rates for the top income tax bracket, which is taxed at 39.6 percent.

Trump also said he’d like to wipe away the estate tax altogether, using the term “death tax” that’s popular among some conservatives. “American workers have paid taxes their whole lives, and they should not be taxed again at death—it’s just plain wrong,” Trump said. “We will repeal it.” But the inheritance tax, as currently constituted, touches only a small segment of the population. The federal government doesn’t take any taxes out of estates unless the inheritance exceeds $5.4 million for individuals or $10.9 million for couples. That leaves just the wealthiest 0.2 percent of families paying any estate taxes and makes its repeal less than a great boost to the working class.

Meanwhile, Trump’s speech included many subtle appeals to corporate interests. He promised to reduce the business tax rate from 35 percent to 15 percent. Under a President Trump, there would be a complete moratorium on new federal regulations, a massive handout to the financial industry. “Next,” he added, “I will ask each and every federal agency to prepare a list of all of the regulations they impose on Americans which are not necessary, do not improve public safety, and which needlessly kill jobs. Those regulations will be eliminated.” Given his previous claims that he’d like to ditch the 2010 Dodd-Frank law intended to rein in Wall Street, it sounds likely that Trump would vastly lower the number of rules banks and financial institutions need to follow.

But Trump’s speech didn’t contain only the normal Republican calls to lower taxes and cut government oversight of business. He also called for an end to the carried-interest loophole, which allows hedge-funders and others to pay a much lower tax rate on earnings, marking a rare policy agreement with Hillary Clinton. And as Trump launched an usual attack against free trade policies, he cited the liberal Economic Policy Institute to explain potential harms of the Trans-Pacific Partnership. Trump also proposed a tax deduction for families to offset the cost of child care—but since that benefit is a deduction rather than a credit, its benefits would skew toward the upper middle class rather than working-class families.

Not unlike other Trump speeches, this one was unconstrained by facts. Trump accused Clinton of seeking to raise taxes on the middle class, based on a blatant misreading of a recent speech. (Clinton has in fact vowed to leave taxes untouched for all but the extremely wealthy.) The Republican nominee called the nation’s low unemployment rate a hoax, another claim that has landed him in trouble with fact-checkers in the past.