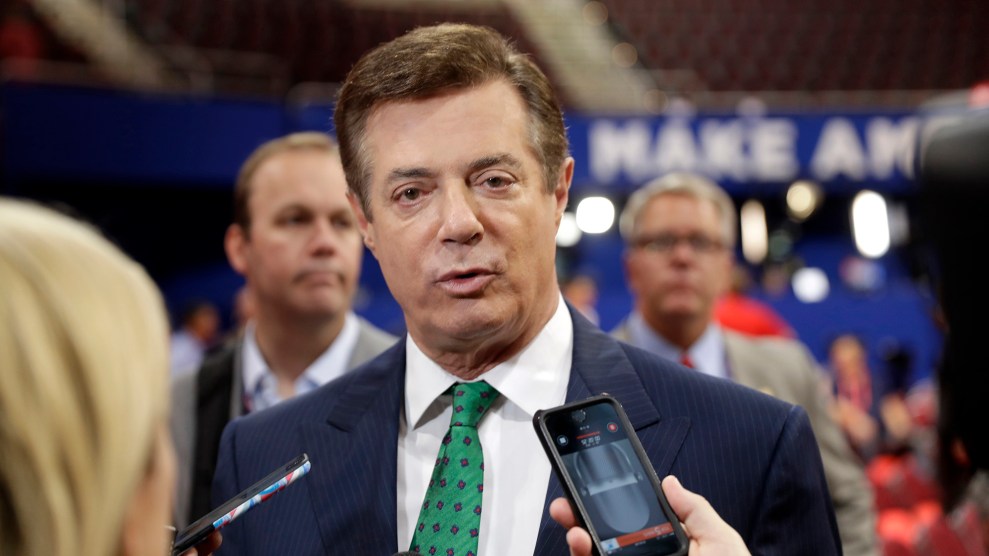 Is Donald Trump’s campaign chairman, Paul Manafort, still on the payroll of a Ukrainian politician or party?

According to the New York Times, which on Monday published an investigation into Manafort’s decadelong involvement in Ukrainian politics, the answer is unclear. As the Times detailed, Manafort—who has a lengthy history of helping dictators and strongmen rehab their reputations—once represented Ukraine’s former President Viktor Yanukovych, a pro-Russian politician with ties to Vladimir Putin who fled Ukraine in 2014 as demonstrations and uprisings raged in the country. But Manafort’s work in Ukraine didn’t end with Yanukovych’s ouster. He subsequently went to work for Serhiy Lyovochkin, Yanukovych’s former chief of staff, to revitalize Yanukovych’s beleaguered political party. The Times reported this intriguing detail near the end of its article:

It is not clear that Mr. Manafort’s work in Ukraine ended with his work with Mr. Trump’s campaign. A communications aide for Mr. Lyovochkin, who financed Mr. Manafort’s work, declined to say whether he was still on retainer or how much he had been paid.

Hope Hicks, Trump’s spokeswoman, did not respond immediately to questions about whether Manafort is currently involved in any work related to Ukrainian politics. If Manafort does have active ties to Lyovochkin or other Ukrainian politicians, this would raise conflict-of-interest questions and fuel the controversy surrounding Trump’s foreign policy stance on Russia and his relationship with Putin.

The Trump campaign has raised the eyebrows of the press and many foreign policy experts by repeatedly advocating a softer stance toward Russia. Over the weekend, for instance, Trump told ABC’s George Stephanopoulos that he would look into recognizing Russia’s annexation of Crimea and that the people of Crimea would rather be part of Russia (which also happens to be the official line of the Kremlin).

Another example of the Trump campaign’s pro-Russia maneuvering came last month while the Republican Party was drafting its platform in Cleveland. According to the Washington Post, Trump aides removed a provision from the platform that called for the United States to provide “lethal defensive weapons” to Ukraine’s military to defend itself against Russia and dissidents. Instead, the campaign worked behind the scenes to replace the pledge to provide weapons with a call for “appropriate assistance.”

When Stephanopoulos asked Trump about this change in the platform, Trump said he had not been involved. But he added, “It’s, well, you know, I have my own ideas.”