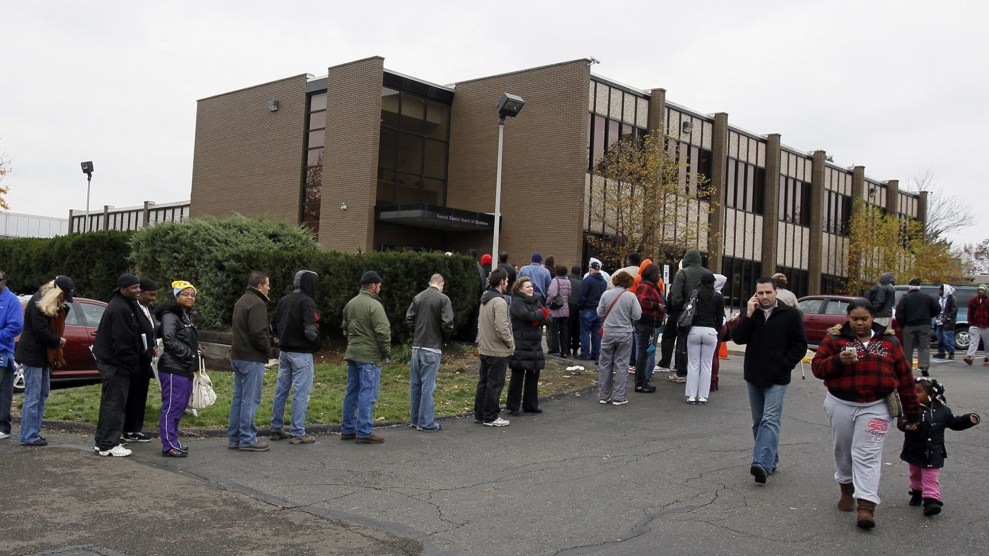 A divided panel of judges on the 6th Circuit Court of Appeals ruled Tuesday that a lower court erred by reinstating Ohio’s “Golden Week,” a period when Ohio voters could register to vote and cast absentee ballots at the same time.

“This case presents yet another appeal (there are several pending in the Sixth Circuit alone) asking the federal courts to become entangled, as overseers and micromanagers, in the minutiae of state election processes,” reads the majority opinion written by Judge David McKeague. He added that Ohio is a “leader” compared with other states when it comes to early voting opportunities, and that the “undisputed factual record shows that it’s easy to vote in Ohio. Very easy, actually.”

The case, Ohio Democratic Party v. Husted, was filed after Republican state lawmakers introduced a host of voting restrictions in 2013, including the elimination of Golden Week and same-day voter registration. The Ohio Democratic Party, among others, sued in May 2015, arguing that the reductions violated the 14th Amendment and Section 2 of the Voting Rights Act, which prohibits discriminatory voting practices or procedures. A district court judge in Ohio agreed, ruling in May 2016 that the cuts impose “a modest, as well as a disproportionate, burden on African Americans’ right to vote.”

Judge Jane Stranch, the one dissenting vote on the ruling, wrote that the majority opinion overturned a decision that was based on a 10-day bench trial that included more than 20 witnesses (8 of whom were experts) and produced a 120-page opinion that dismissed many of the claims by voting-rights advocates. But this decision acknowledged that the elimination of both Golden Week and same-day voter registration went too far, even as the lower court disagreed with other challenges to voting restrictions originally brought in the case. Judge Stranch noted that the trial included evidence that African Americans in Ohio used early in-person voting and Golden Week at higher rates than whites in 2008 and 2012, and that it demonstrated the importance of early voting for black voters because of factors including more limited overall access to transportation and less flexible work schedules than their white counterparts.

“A great deal of work underlies the district court’s conclusion on this important subject,” Stranch wrote. “Both that work and the substantial support found in the record stand in opposition to the majority opinion’s blithe assertion ‘that it’s easy to vote in Ohio. Very easy, actually.'”

Marc Elias, one of the main Democratic lawyers working the case (and the attorney for Hillary Clinton’s presidential campaign, which was not a party to this case), tweeted:

I am disappointed that a split 6th Circuit — 2-1 — has now OVERTURNED restoration of Golden week. Bad for voters. Bad for voting rights.

The Constitutional Accountability Center, a judiciary advocacy group, which had filed an amicus brief in support of keeping Golden Week on the books, slammed Tuesday’s decision. David Gans, the center’s director of the Human Rights, Civil Rights, and Citizenship Program, wrote in a  statement, “Today’s 2-1 decision…rubber-stamps Ohio’s decision to cut back on early voting and same-day registration, failing to ensure that the state respected the voting rights of all Ohioans. The court’s decision will make it harder for racial minorities and others to cast a ballot this coming Election day.”

Rick Hasen, an elections expert at the University of California-Irvine, wrote on Tuesday that Ohio’s 29-day early voting period was already “exceedingly generous.” He acknowledged that while he “might support Golden Week as good policy, I worry when courts are used in this way to prevent every cutback in voting, especially after voting rights proponents had settled a suit with Ohio on favorable terms.”

Unless the Ohio Democratic Party appeals to the full 6th Circuit or the US Supreme Court, Golden Week and same-day registration will not be in place for the election in November.