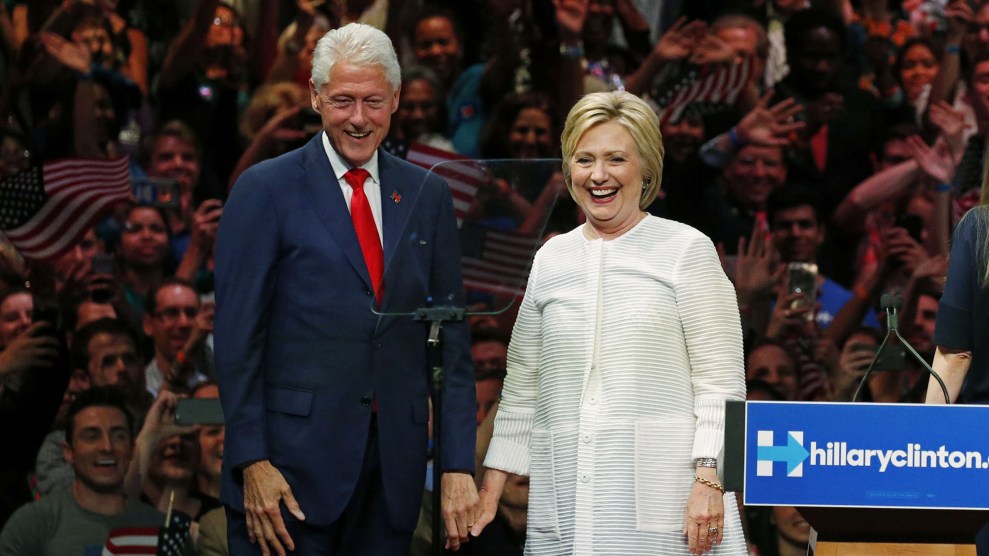 Hillary Clinton released her 2015 tax filings on Friday morning, shedding light on her ample earnings and putting more pressure on Donald Trump to reveal his own. But given the high tax rate they show the Clintons paying, Trump might not be so eager to release filings that could show him making far smaller payments to the IRS.

According to the filings, Bill and Hillary Clinton earned $10.7 million in 2015 and paid roughly $3.6 million in federal taxes. Taking into account their state and local taxes, the Clintons had a total effective tax rate of more than 43 percent.

Tax experts speculate that Trump, by contrast, may pay little in taxes, or even no federal income tax at all. Although Trump has said his tax payments are “substantial,” his real estate holdings offer numerous ways to reduce tax liability. It may be easier for the Clintons to release the details of their finances than it would be for Trump to release his, since nearly all of their income is from book sales and speech fees, both of which Hillary Clinton has already made public in her filings with the Federal Elections Commission.

Trump has also faced questions about his charitable giving. Despite his assurances that he gives generously, few signs of actual donations have been uncovered by reporters. Clinton’s tax filings show that she and Bill Clinton donated just over $1 million to charity last year, the bulk of which went to the Clinton Family Foundation*. Another $42,000 was donated to the Desert Classic Charities, a nonprofit that organizes the Carebuilder Challenge charity golf tournament with the Clinton Foundation. In total, the Clinton’s gave nearly 10 percent of their income to charity.

Tim Kaine and his wife, Anne Holton, also released 10 years of tax returns, showing that last year the couple earned $313,441 and paid a federal tax rate of 20.3 percent, plus another 5.4 percent in state and local taxes. Kaine and Holton had a small amount of earnings from investments, but almost the entirety of their income came from their salaries: Kaine’s income as a United States senator and Holton’s from her work as the state of Virginia’s secretary of education. They made $21,290 in tax-deductible charitable donations last year.

The bulk of the Clintons’ income came from Bill Clinton’s speeches—he was paid $5.2 million in speaking fees in 2015. The former president was paid another $1.6 million in consulting fees by GEMS Education, an education company based in Dubai, and Laureate Education Inc, which owns a collection of for-profit colleges and universities. Hillary Clinton earned almost $1.5 million from speaking fees and another $3 million from a book deal. Both Clintons reported income from royalties and retirement plans and just over $84,000 in income from an investment in the Vanguard 500 Index mutual fund.

This story has been updated to clarify that the Clintons donated to the Clinton Family Foundation, a private foundation used by the couple to make charitable donations, and not the better-known Bill, Hillary and Chelsea Clinton Foundation.