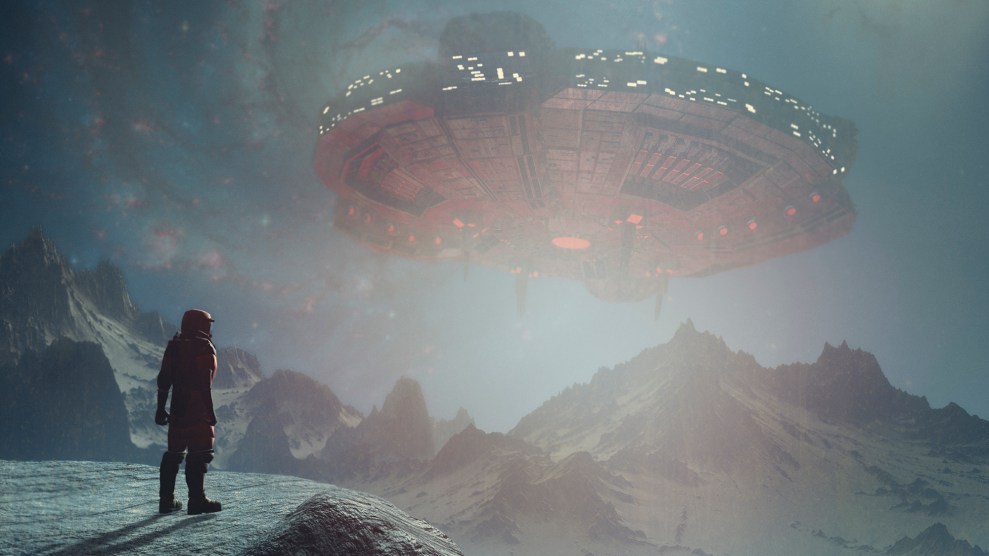 On Saturday, Paul Gilster, who blogs about deep space exploration and other interstellar issues, broke the news on his blog that in May 2015, a team of Russian scientists had detected an interesting signal coming from a star system about 95 light-years from Earth. Gilster was very measured in his report, noting that “no one is claiming that this is the work of an extraterrestrial civilization, but it is certainly worth further study.” The researchers involved believe the Search for Extraterrestrial Intelligence (SETI) Institute, a nonprofit organization that’s looking for life in the universe and has the equipment to scan the skies for signals from deep space, might follow up on the lead.

But that didn’t stop others from going wild, most notably the New York Observer, which published an attention-grabbing story Monday titled “Not a Drill: SETI Is Investigating a Possible Extraterrestrial Signal From Deep Space.”

SETI is, in fact, scanning for the signal, according to Seth Shostak, a senior astronomer at the organization, who discussed the matter in a blog post available on the group’s website. “Could it be another society sending a signal our way?” he wrote. “Of course, that’s possible. However, there are many other plausible explanations for this claimed transmission—including terrestrial interference. Without a confirmation of this signal, we can only say that it’s ‘interesting.'”

UFOs, extraterrestrials, and life in outer space has gained new currency over the last year or so. Last fall, a team from Yale University announced they had found a star that gave off such unique light patterns that some speculated it was being orbited by an alien megastructure. Hillary Clinton and her campaign chairman, John Podesta, have both repeatedly discussed the need for the release of information about US government research into extraterrestrials. (You can read more about Clinton’s history with the UFO issue that goes back more than 20 years here.) A week ago, scientists announced they had found a potentially life-supporting, Earthlike planet just 4.5 light-years away, within Earth’s closest celestial star system neighbor.

This whole thing got us thinking: What would happen if extraterrestrials not only reached out to communicate, but showed up on our doorstep? Is there a plan?

I put this question to the Department of Defense last fall when I profiled Stephen Bassett, the only registered lobbyist in Washington whose major focus is to force the US government to reveal what it knows about extraterrestrials contact with the human race. To people like Bassett, the question of what to do when they show up is moot because it has already happened; the people who need to deal with it already are.

The Department of Defense does not agree. Here’s the answer I got from them: “The [Department of Defense] does not maintain plans for hypothetical dangers for which we have absolutely no information—either to the likelihood of the danger, or to what form the danger would take.” For what it’s worth, the DoD spokesman also said the department doesn’t have an office or organization that handles “issues related to UFOs and/or extraterrestrials,” and the DoD has never interacted with or recovered any kind of material related to extraterrestrials.

“Whatever it is would be so far beyond us it would look and appear magical or spiritual, totally beyond our ability to cope with or resist if hostile. If such an event occurred we’d simply have to muddle through as best we could.”

Do we really not have any plans in place should we be contacted by an alien race? I checked the DoD’s answer with Christopher Mellon. A former deputy assistant secretary of defense for intelligence and staff director of the Senate Intelligence Committee, among other roles, he said, “I think you got an honest answer from DoD. How would you plan for the arrival of an advanced civilization without any understanding whatsoever of their capabilities, technology or intentions?” He added that his sense was that the government had “little if any idea” of what we’d be up against and “whatever it is would be so far beyond us it would look and appear magical or spiritual, totally beyond our ability to cope with or resist if hostile. If such an event occurred we’d simply have to muddle through as best we could.”

“Meanwhile,” he says, “DoD has an overflowing plate already and I suspect the Joint Staff has little patience for such seemingly unlikely, open-ended and ill-defined scenarios.”

Nick Pope, a former official with the British Ministry of Defense whose job it was to investigate UFO sightings, doesn’t think powerful governments should get off that easy. He told me Tuesday he’s long advocated some sort of contingency plan but never saw any evidence that the British or US governments had one. When he asked colleagues in the intelligence and military world about plans, “there was no real enthusiasm for it. It was a combination of skepticism and almost this feeling that this was the ultimate taboo, that something like this could just not be put down on paper.”

Pope said news about a potential signal from another civilization should trigger a whole series of thorny questions: Is this just a signal letting us know they’re there, or is there information encoded within it? If there is information in it, can we decode it? Should we? If we could, should that information be disclosed? Who should control the information in the signal, if there’s anything there?

That’s a far cry from a scenario that finds us dealing with an extraterrestrial craft in orbit around Earth or actually landing. “The No. 1 priority would obviously be avoiding getting in a fight with these people,” he said. But what do we do then? Who’s in charge? Who speaks for planet Earth? What is the message?

Pope admits that the possibility of this scenario playing out is miniscule, describing it as “the ultimate low probability, high impact scenario.” But, he said, “We don’t need to go into Star Trek territory to say it’s possible we could be visited. That being the case, it just seems prudent to have a plan.”