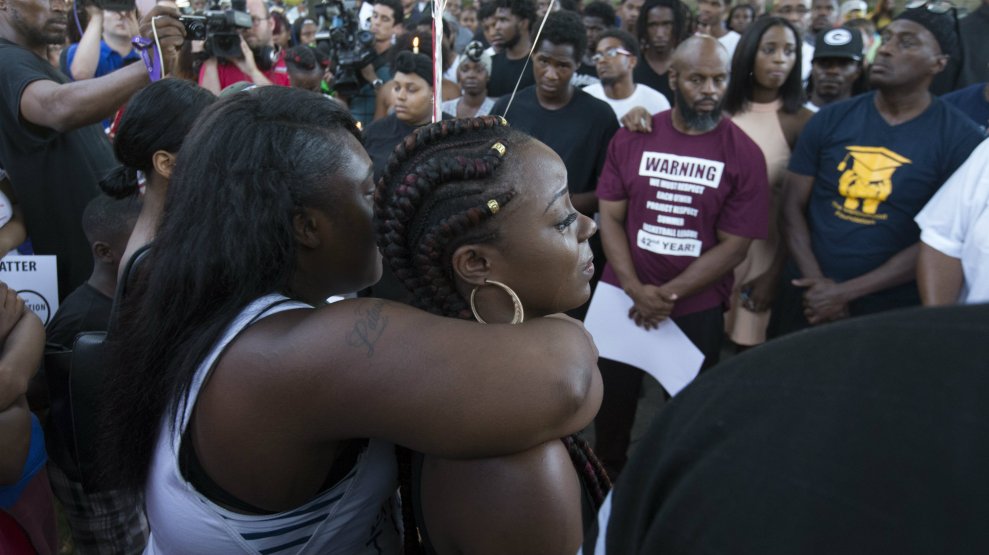 Kimberly Neal, sister of Sylville Smith, is comforted at a vigil for her brother on August 14.Mark Hoffman/AP

Sylville Smith, the 23-year-old black man whose shooting by police sparked riots in Milwaukee earlier this month, suffered from bipolar disorder and attention deficit disorder, according to his mother, Mildred Haynes. Smith had chosen not to take medication, Haynes told me, because he thought that admitting to mental illness would impede his ability to get a concealed-carry license. “He didn’t want to be disabled because he wanted a gun,” she told me. Her son had been shot twice in the past, and robbed four times, Haynes said. He wanted the weapon to protect himself.

Wisconsin is a concealed-carry state. Applicants who have been committed for treatment for mental illness or drug dependency are barred from receiving a permit, but people are not required to undergo a mental health evaluation when they apply. Haynes earlier told the Milwaukee Journal Sentinel that her son had, in fact, obtained a permit. Police officials have said the gun in Smith’s possession at the time of his death was stolen from a home in a nearby town.

Sylville Smith had  problems with comprehension and understanding, and he’d spent time in special-ed classes.

In our interview, Haynes also told me that Smith had an Individualized Education Program (IEP) in elementary and high school, a specialized plan for students with learning disabilities, mental health issues, or other impairments. He had problems with comprehension and understanding, she said, and he spent time in special-education classes from elementary school onward. He also was suspended from school for behavior related to his condition.

Smith was shot by a Milwaukee police officer earlier this month while fleeing from a traffic stop. According to the official account, the officer chased Smith, who turned toward the cop holding a gun. Milwaukee Mayor Tom Barrett said body camera footage of the incident, which has not been released, confirms the police account. The department has not publicly identified the officer, but Milwaukee residents have been spreading his name and, in some cases, home address on social media—the Milwaukee Journal Sentinel says it has confirmed that this officer was the shooter.

Other recent shootings by police have involved subjects with a mental illness. Korryn Gaines, killed by Baltimore County police officers during a standoff earlier this month, had “developmental and behavioral injuries,” depression, and mood swings due to childhood lead poisoning, according to a lawsuit filed against her former landlord. In July, a health worker was inexplicably shot in North Miami after an officer took aim at an autistic patient the victim cared for. The officer, according to the police, mistook the toy car the patient was holding for a gun.

A report by the Treatment Advocacy Center last December found that 1 in 4 police encounters involve a person with mental illness, and that people with mental health problems are 16 times more likely to be killed by police than are people who lack such problems.