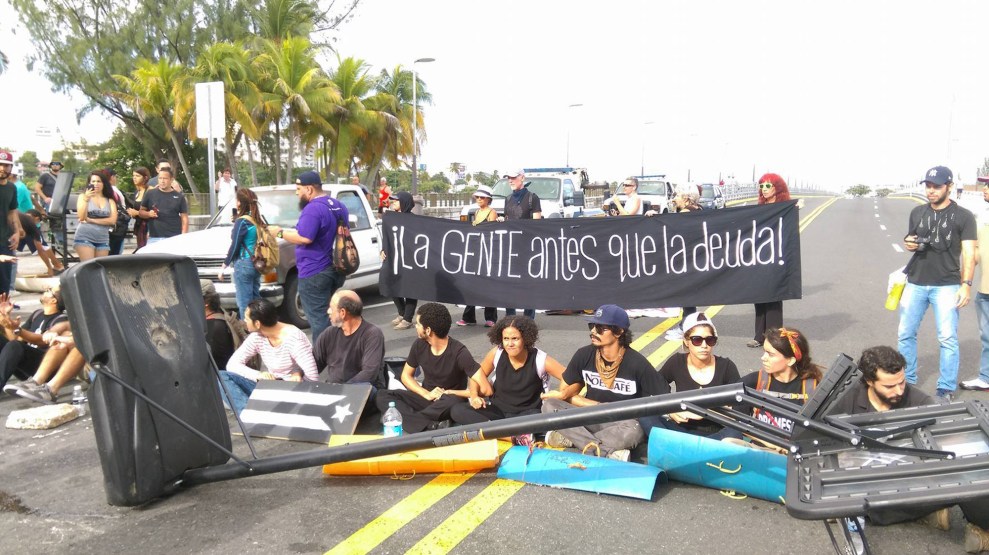 Protesters in San Juan, Puerto Rico, block the street in front of a hotel hosting a conference intended for business executives and the finance industry. The sign reads, "The people before the debt!"Eliván Martínez/CPI

President Barack Obama announced the appointment on Tuesday of seven people to the financial review board established by Congress to control Puerto Rico’s finances as the island attempts to manage $70 billion in outstanding debt. The board, made up of three Democrats and four Republicans, will not only approve any budgets created by the island’s politicians, but also attempt to negotiate with the island’s nearly 20 creditors.

The board’s Republican members are Andrew Biggs, a resident scholar at the American Enterprise Institute; Carlos Garcia, former president of Puerto Rico’s Government Development Bank; David Skeel, a University of Pennsylvania law professor; and Jose Carrión, an insurance broker. The Democrats are Arthur Gonzalez, a senior fellow at the New York University School of law and a former US bankruptcy judge; Jose Ramon González, president of the Federal Home Loan Bank of New York; and Ana Matosantos, California’s budget director from 2009 to 2013, according to Bloomberg.

Obama selected the names from a list presented by Republican and Democratic leaders of Congress. It’s unclear when the board will begin its work.

“With a broad range of skills and experiences, these officials have the breadth and depth of knowledge that is needed to tackle this complex challenge and put the future of the Puerto Rican people first,” Obama said in a statement released with the names. “In order to be successful, the Financial Oversight and Management Board will need to establish an open process for working with the people and Government of Puerto Rico, and the members will have to work collaboratively to build consensus for their decisions.”

The announcement of the board members came the same day hundreds of protesters blocked a street in front of a San Juan hotel, which was hosting a Puerto Rico Chamber of Commerce conference for business executives and the financial industry about how to “be a part of Puerto Rico’s recovery” under the new financial control board. At least one person was arrested.

Congress created the board in the Puerto Rico Oversight, Management, and Economic Stability Act (PROMESA), a measure passed in late June to stave off more than a dozen separate lawsuits against the island’s government and public entities that had taken out billions of dollars in debt over the years to fund operations. Puerto Rico’s colonial status prevented its government from restructuring debt using US bankruptcy courts, and multiple efforts by the Puerto Rican government to negotiate with its lenders failed. Earlier this week, the Centro de Periodismo Investigativo (the Center for Investigative Journalism) in San Juan  released a report listing 275 hedge funds and other financial groups that own Puerto Rican debt. The news organization only received the records after battling the government of Puerto Rico for more than a year.

Rep. Luis Gutiérrez (D-Ill.), an opponent of an independent review board, issued a statement calling for the board to conduct as much of its work in public as possible. Referring to the board as the “federal Junta“—a reference to a group put in control after a seizure of power—Gutiérrez called for all votes, meetings, and statements to be made public, in Spanish and English, so Puerto Ricans can keep tabs on their actions.

“We expect nothing less in a democracy and last I checked, Puerto Rico is a colony, but still a democracy of U.S. citizens who deserve respect and the trust of this appointed body,” he wrote in his statement. “This is especially important because the body skews towards appointees from financial institutions and those inclined to be sympathetic to bond-holders at the expense of the Puerto Rican people…My message is simple, if you join the Junta, promise to respect the Puerto Rican people, otherwise you are no better than an occupying force.”