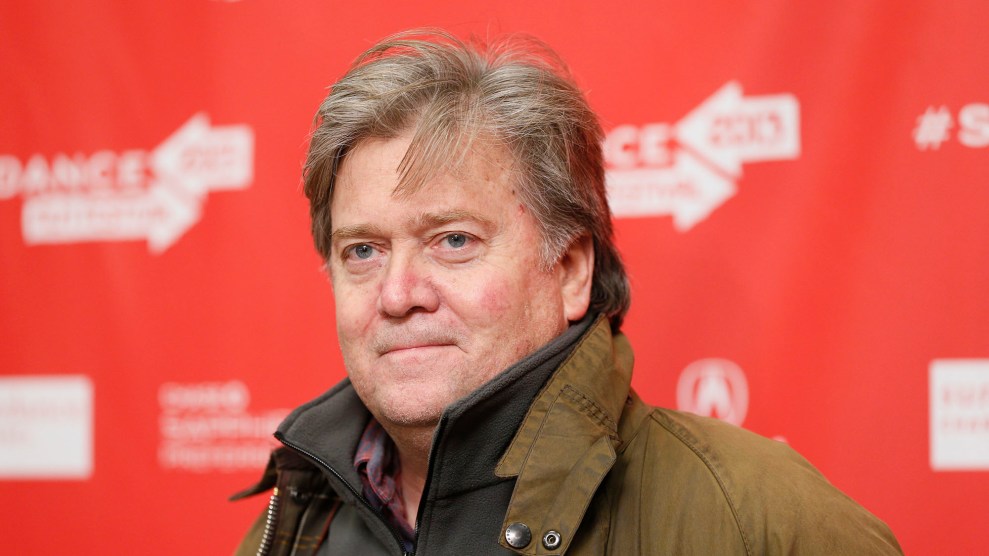 For months, the conservative news outlet Breitbart News has acted as an unofficial mouthpiece for Donald Trump and lead propagator of the populist, anti-immigrant sentiment that his campaign has tapped into. So it’s fitting that this unofficial relationship is now a little more official, with the site’s executive chairman, Stephen Bannon, joining the Trump campaign as its CEO.

Bannon has blurred the line between journalism and right-wing political advocacy for years. While at the helm of Breitbart News, which he took over in spring 2012 after the sudden death of its founder Andrew Breitbart, Bannon founded a research outfit targeting Democrats and establishment Republicans. He also participated in Groundswell, a group of right-wing activists, journalists, and others who secretly coordinated talking points attacking Democrats and advancing conservative causes. When Breitbart News editor-at-large Ben Shapiro left the publication this spring, he accused Bannon of turning the site into “Trump’s personal Pravda.”

Bannon’s arrival is part of a larger shakeup of the Trump campaign, which is scrambling to mount a comeback amid slumping poll numbers nationally and in key swing states. In addition to Bannon, who is taking a leave from Breitbart News to work for Trump, pollster Kellyanne Conway has been named campaign manager. The elevation of Bannon and Conway appears to amount to a demotion for campaign chairman Paul Manafort, who is under scrutiny for his work for the pro-Russian governing party in Ukraine. Manafort had been running Trump’s operation since the nominee’s original campaign manager, Corey Lewandowski, was ousted in June.

With Trump’s campaign cratering, the Republican National Committee held a “come to Jesus” meeting last week to urge Trump to act more presidential and stay on script. But the selection of Bannon, known for his combative style, suggests Trump will take a different route. Under Bannon, Breitbart News has not only targeted Democrats but has made a blood sport of going after establishment Republicans—even conservatives such as Marco Rubio and Paul Ryan. Breitbart News has published near-daily articles over the last month blasting Ryan and propping up his right-wing primary challenger. (Breitbart News said Ryan was “desperate” and “running scared,” but the House Speaker easily won his August 10 primary with 84 percent of the vote.)

When news of Bannon’s new role atop Trump’s campaign broke on Wednesday morning, Stuart Stevens, Mitt Romney’s former chief strategist, tweeted, “Steve Bannon potentially having inside knowledge of a classified briefing is insane. POTUS should postpone or cancel briefing of Trump.” Glenn Beck freaked out on his radio show, saying, “Ask people who worked at Breitbart! He’s a horrible despicable human being.” Breitbart News, meanwhile, reveled in the anguish of the establishment with such headlines as “WaPo: Trump’s Stephen K. Bannon Hire ‘a Middle Finger to the GOP Establishment.'”

Bannon and Breitbart News‘ unwavering sympathies for Trump were forced into the open this spring when Lewandowski manhandled then-Breitbart News reporter Michelle Fields. Instead of backing Fields, the news outlet seemed to go out of its way to disprove her story and support the Trump campaign’s version of events. Even though a Washington Post reporter witnessed the episode and corroborated Fields’ account—and video footage later emerged showing the altercation—Breitbart News ran a series of articles questioning her claims, reportedly with Bannon’s full support. Politico reported that Bannon “made several disparaging remarks” about Fields in conference calls, and the Daily Beast reported that Bannon allegedly referred to Fields as “that f*****g c**t” to others at the publication as the fallout from the incident was unfolding. Fields ultimately resigned; she now writes for the Huffington Post. Several other Breitbart News staffers quit in protest of how Bannon and the publication’s leadership had handled the situation.

Bannon is a relatively new arrival on the political scene. A former Naval officer, he attended Harvard Business School and spent the 1980s working as an investment banker at Goldman Sachs. In 1990, he left New York for Los Angeles, where he started a small investment bank focused on Hollywood clientele. He hit the jackpot when he brokered Ted Turner’s acquisition of the media company that owned the TV show Seinfeld. Bannon agreed to accept a stake in Seinfeld, a little-known show at the time, instead of a cash fee. To this day, royalties from the show help fund Bannon’s conservative political activities. By the end of the 1990s, Bannon had entered the film business, first as a producer and later as a director whose credits include documentaries venerating Ronald Reagan and the tea party. Those efforts led Bannon into the orbit of the conservative blogger Andrew Breitbart and ultimately put him atop the conservative provocateur’s new empire.

After Bannon’s role with Trump campaign was announced, Shapiro, Breitbart News’ former editor-at-large, penned a scathing post about his onetime boss. “Bannon’s ascension is the predictable consummation of a romance he ardently pursued,” Shapiro wrote. “I joked with friends months ago that by the end of the campaign, Steve Bannon would be running Trump’s campaign from a bunker. That’s now reality. Every nightmare for actual conservatives has come true in this campaign. Why not this one, too?”