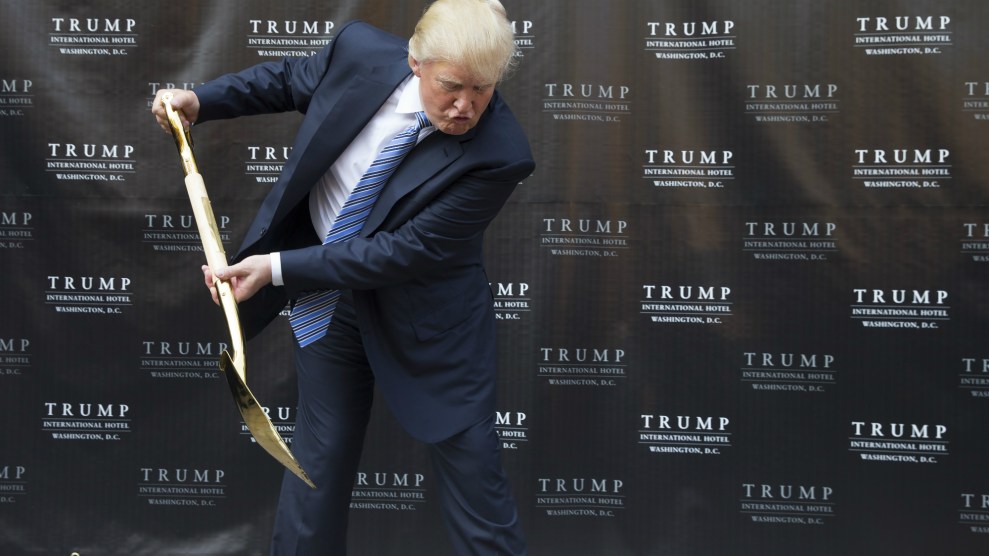 If elected president, Donald Trump would bring with him to the White House unprecedented conflicts of interest, thanks to his sprawling holdings and various debts, including more than $100 million owed to a foreign bank. But his biggest conflict might be the $200 million hotel project Trump’s company is developing a couple of blocks from the White House in the Old Post Office Building, a historic property owned by the federal government and leased to the Trump Organization for 60 years. It seems likely, if not inevitable, that during a Trump presidency the federal government could find itself negotiating with the commander in chief—or his children—over matters relating to the new Trump International Hotel.

Completed in 1899, the Old Post Office is an iconic piece of real estate in a prime downtown DC location on Pennsylvania Avenue. Once the main post office for the District of Columbia, the building subsequently housed federal offices. By 2010, the property—which had escaped demolition in the 1970s due to an outcry by preservationists—was run-down and costing the government millions of dollars a year to operate and maintain. Congress pressured the General Services Administration, which manages the federal government’s facilities, to solicit bids to lease and revitalize the building. In 2012, Trump beat out competitors, including hotel chains Hilton and Hyatt, by offering an enticing deal—at least $3 million a year in rent and a share of the revenue, among other favorable terms—that some of his rivals thought was too good to be true and left little margin for profit. (Some bidders were also surprised that the government awarded this prize real estate to Trump, who at the time was actively stoking conspiracy theories that President Barack Obama was not a US citizen.)

Rival bidder BP-Metropolitan Investors, LLC, a consortium that included Hilton Hotels, angrily appealed the GSA’s decision to award the property to Trump, noting that the real estate mogul couldn’t possibly deliver on the terms of his proposal. At $200 million, his renovation was slated to cost $60 million more than BPM’s proposed overhaul, yet Trump was still pledging revenues to the government that surpassed those offered by his competition. “After a final contract award,” BPM warned in its complaint, “when the Trump revenues promised to GSA are found to be unachievable, the GSA and U.S. taxpayers will be left with an unrealistic economic model and another failed attempt to redevelop the Old Post Office. GSA and the U.S. taxpayers will have no choice but to ‘trade out’ the unrealistic ‘great deal’ it was promised for the far more pedestrian or even more disastrous outcome when it is taken back in default.”

“You’d be kidding yourself if you don’t think the president of the United States has influence over this. I don’t know how this is not a bigger issue. It’s crazy.”

BPM attached to its complaint more than 50 pages of exhibits detailing prior Trump bankruptcies, failed deals, and disgruntled business partners. But the GSA stuck with its decision.

Other critics have noted that, in order to turn a profit, Trump would have to charge exorbitant rates—and there’s no guarantee visitors would pay them in a city crowded with luxury hotels. Washington Post columnist Steven Pearlstein noted in 2012 that “none of the other experienced bidders came anywhere close to [Trump’s] numbers—and for good reason: They make no economic sense. Industry experts tell me that to justify that level of investment and that rent, Trump would have to fetch average room rates of at least…$750, which is far above the $500-plus average that even the city’s top hotel, the Four Seasons in Georgetown, commands.” At the time, Trump’s daughter Ivanka responded angrily to Pearlstein’s column, saying, “His numbers are pure speculation and, simply put, wrong.” She added, “We wanted to be extremely conservative in our projection and therefore showed achieving a rate less than that of the Four Seasons Georgetown.”

But now it appears that it was Ivanka Trump who was wrong. Pearlstein’s estimate, meanwhile, seems remarkably accurate. The hotel is slated to open on September 12 and is already accepting reservations. On October 18, a random weeknight this fall more than a month after opening, the Trump International’s cheapest room will run $775 a night. (The Trump Townhouse, a 6,300-square-foot two-bedroom suite, will cost $29,000 a night.) That same night, the least expensive room at the Four Seasons hotel in Georgetown, according to that hotel’s website, will be $735. (A one-night stay at the Ritz-Carlton will start at $685.) On some nights, the Trump International will be far and away the most expensive hotel in town, charging as much as three times more than other five-star hotels, such as the Mandarin Oriental. The question becomes whether or not Trump’s hotel can command those prices. If Trump can fill those rooms, the hotel may far exceed the expectations of critics who doubt it can be profitable at the price he paid. But if he can’t, it might spell trouble for the operation—and send Trump’s company back to the GSA seeking better terms that give the hotel a shot at profitability.

Going back to the bargaining table would not be an extraordinary move for a real estate developer—and especially not for Trump, who has frequently sought to change the terms of deals and has bragged of renegotiating debt. (He’s currently trying to renegotiate the presidential debate schedule.) And there are any number of reasons why the Trump Organization might need to haggle with the GSA that go beyond merely the bottom line, such as preserving certain architectural features. But Trump isn’t just a real estate developer. He’s potentially the boss of the very agency his company would be negotiating with. The GSA did not respond to a request for comment about how it would handle a conflict-of-interest issue if Trump becomes president.

Already the Trump Organization has sought to revise certain aspects of the Old Post Office deal. When his company submitted the plan, Trump said he had financial backing from Colony Capital, an investment firm run by his longtime friend Tom Barrack, a California billionaire who is currently serving as one of Trump’s economic policy advisers and helping finance a pro-Trump super-PAC. The Trump Organization later informed the GSA that Colony would not in fact be financing the project and that the organization would instead borrow $170 million from German banking giant Deutsche Bank.

Though historic preservation was an important aspect of the GSA’s decision-making process, the Trump Organization also informed the GSA in February 2013 that it would not be using the architect that it had identified in its proposal, a longtime champion of maintaining the building’s architectural and historical integrity. Since then, Trump’s company has regularly sparred with the government over preservation matters.

Jessica Tillipman, a law professor at George Washington University who specializes in government ethics, said the Old Post Office deal poses a massive conflict of interest for a President Trump. “You’d be kidding yourself if you don’t think the president of the United States has influence over this,” she says. “And he’s taken no affirmative steps to separate himself from this conflict of interest. I don’t know how this is not a bigger issue. It’s crazy.”

Presidents are not subject to the same ethics rules that govern other executive branch employees, but they often take steps, such as setting up blind trusts or handing over control of their assets, to avoid even an appearance of impropriety. But Trump has not been entirely clear on how he would disentangle himself from his complex corporate holdings if he became president. At one point, he suggested he would place his assets in a blind trust “or something.” But he also said this trust would be controlled by his children, who would continue to run his businesses. Blind trusts cannot be controlled by an individual’s family members. Trump’s campaign did not respond to a request for comment on how a conflict of interest with the Old Post Office, or any other property, would be handled.

“People have typically taken steps to silo these different aspects of their lives, because there should not be a doubt in the minds of the American public that the leader of the free world is not going to be putting certain interests over the public’s,” Tillipman says. “And when you haven’t taken affirmative steps, it leaves an open question.”