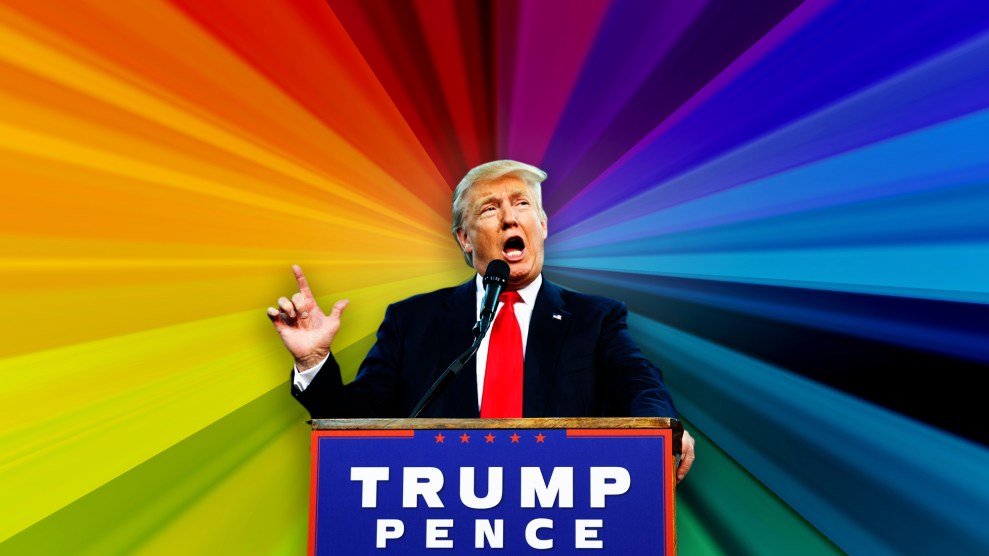 During his 75-minute speech at the Republican National Convention in July, Donald Trump looked genuinely surprised at the roar of applause when he said, “As your president, I will do everything in my power to protect LGBTQ citizens.”

Momentarily going off script, Trump added, “I have to say, as a Republican, it is so nice to hear you cheering for what I just said. Thank you.”

Since the Orlando gay nightclub shooting in June, which killed 49 people, Trump has portrayed himself as a warrior for gays while accusing his rival Hillary Clinton of being weak on terror and taking money from countries with bad records on gay equality. He has used the massacre to double down on his promise to temporarily ban Muslims from entering the United States.

“The bottom line is that the only reason the killer was in America in the first place was because we allowed his family to come here,” Trump said after the massacre. (The gunman was an American citizen who reportedly declared his allegiance to the leader of ISIS during the attack.) “Clinton wants to allow radical Islamic terrorists to pour into our country—they enslave women and murder gays. I don’t want them in our country.”

“I’m much better for the gays,” he told Fox News at the time. (National gay rights groups roundly disagreed.)

In a foreign policy address in Youngstown, Ohio, on Monday, Trump promised to impose an “ideological screening test” for anyone hoping to immigrate to the United States, one that would “screen out any who have hostile attitudes toward our country or its principles.” That, he said, would include people who “support bigotry and hatred.” The Associated Press reported prior to the speech that Trump planned to impose an ideological test for new immigrants to determine their opinions on American values like religious freedom, gender equality, and gay rights.

But there are some within Trump’s own party who might have difficulty passing a test on gay rights and the basic tenets of equality advocated by the gay rights movement, including marriage, anti-discrimination policies, and hate-crime legislation.

Here are a few of them:

Trump himself does not support nationwide marriage equality and has said he would “strongly consider” appointing judges to overturn it. In one 2011 speech, Trump likened his refusal to embrace same-sex marriage to his reluctance to use a new kind of golf putter, as the New York Times reported:

“It’s like in golf,” he said. “A lot of people—I don’t want this to sound trivial—but a lot of people are switching to these really long putters, very unattractive,” said Mr. Trump, a Republican. “It’s weird. You see these great players with these really long putters, because they can’t sink three-footers anymore. And, I hate it. I am a traditionalist. I have so many fabulous friends who happen to be gay, but I am a traditionalist.”

The 2016 Republican Party platform promises to defend “marriage against an activist judiciary,” describing the Supreme Court’s historic 2014 gay marriage ruling this way: “Five unelected lawyers robbed 320 million Americans of their legitimate constitutional authority to define marriage as the union of one man and one woman.” The document also endorses the “First Amendment Defense Act,” a federal bill—now in committee, and not yet debated—that seeks to allow businesses and individuals to discriminate against LGBT Americans on religious grounds.

The platform also supports “the right of parents to determine the proper medical treatment and therapy for their minor children,” a provision that was born out of a fight to allow parents to take their kids to “conversion therapy”—a bogus practice that attempts to “un-gay” patients. Conversion therapy has been made illegal in several states. (According to Time, the original language proposed by Tony Perkins, the head of the Family Research Council and a delegate from Louisiana, was a more strident defense of the “therapy.”) The platform also rejects gay and lesbian families by saying, “A man and a woman family is the best, ideal vehicle for raising children.”

Trump’s vice presidential pick, Gov. Mike Pence of Indiana, was something of a pioneer in laws allowing businesses to refuse service to gays on religious grounds, when in 2014 he rushed through a bill known as the Religious Freedom Restoration Act. After his state lost 12 big conventions and an estimated $60 million amid a national backlash, Pence pushed state lawmakers to tweak the bill to protect gays and lesbians. But as my colleague Hannah Levintova pointed out in mid-July, Pence’s staunch opposition to gay rights goes back even longer:

In 2003, Pence, then representing the sixth congressional district of Indiana, co-sponsored an amendment that would have prohibited same-sex marriage. Four years later, he voted against the Employee Non-Discrimination Act, which aimed to prevent job discrimination based on sexual orientation. While in Congress, he opposed a bill aimed at more effectively prosecuting hate crimes based on sexual orientation and voted against the repeal of the military’s “Don’t Ask, Don’t Tell” policy.

Gov. Pat McCrory of North Carolina signed into law a sweeping bill earlier this year that struck down workplace protections for LGBT employees and forced transgender people to use public restrooms matching their biological sex—sparking a heated legal battle between the US Justice Department and North Carolina.

Conservative backlash has been fierce, catapulting the bathroom access debate onto the national stage. “This is the most outrageous example yet of the Obama administration forcing its liberal agenda on states that roundly reject it,” said Mississippi Republican Gov. Phil Bryant in May.

For his part, Trump said North Carolina should allow people to “use the bathroom they feel is appropriate.”

In April, the Huffington Post published a comprehensive roundup of the full-blown national assault on gay rights. At the time, there were more than 100 anti-gay bills awaiting a vote in 22 states.