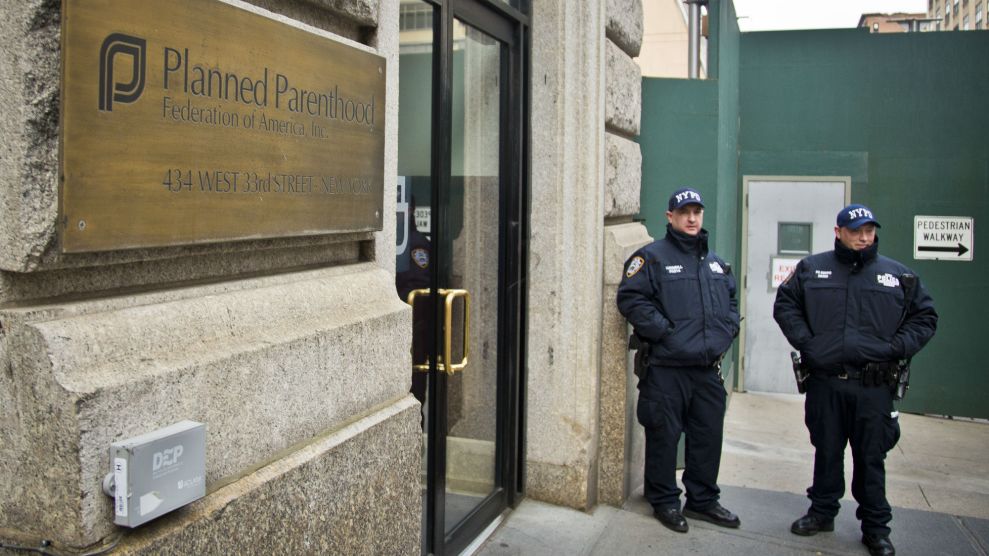 A Planned Parenthood clinic in Appleton, Wisconsin, is closing down. But not because of the state’s staunchly anti-abortion Legislature.

After two civilians and one police officer were killed at a Planned Parenthood in Colorado Springs last November, the women’s health care provider reworked its security plans for each affiliate. The Appleton clinic, which provides a range of reproductive health services beyond abortion to Wisconsin women, is unable to fulfill the new requirements. The closure of this clinic means Wisconsin is down to two Planned Parenthood clinics, 80 miles apart, that provide abortions—one in Milwaukee and one in Madison. There is also one independent abortion provider, Affiliated Medical Services, in Milwaukee.

In 2015, anti-abortion activist David Daleiden released undercover videos that purported to show Planned Parenthood officials involved in selling fetal tissue—a federal crime. This led to a string of 12 state and four congressional investigations, but none revealed any evidence of wrongdoing by the provider. The videos did reinvigorate the anti-abortion movement, and threats of violence against abortion providers surged, culminating in the Colorado Springs clinic shooting.

For local affiliates, this has meant providing more security and, as Planned Parenthood of Wisconsin Chief Operating Officer Chris Williams told the Capitol Times, the Appleton facility was unable to meet the “more stringent and scrutinized approach.” The Appleton clinic has experienced violence in the past. In 2012, anti-abortion activist Francis Grady threw a homemade explosive device through a window and damaged a small exam room. The facility was closed when the incident occurred, so no one was injured, and it reopened less than a week later.

The biggest concern was the state of the clinic building, Williams told the Capitol Times, and retrofitting it to make it secure would have cost nearly $300,000. He did not specify what precisely needed to be done. Iris Riis, media specialist for Planned Parenthood Wisconsin, said that the size of the clinic’s lot was too small to accommodate the security updates. The clinic performed about 600 abortions per year, according to Williams. Collectively, the Madison and Milwaukee Planned Parenthoods provide about 3,400 abortions annually. There is one other Planned Parenthood clinic in Appleton that offers other reproductive health services, but not abortions.

It’s no secret that Wisconsin has a history of passing stringent anti-abortion restrictions, and its governor, Scott Walker, has been quoted saying that choosing the life of a pregnant women or her fetus is a “false choice.” Planned Parenthood is currently suing the state for $1.8 million to reimburse the legal costs of fighting restrictions such as those from Texas that were recently struck down by the Supreme Court as unconstitutional.

The closure means women will now have to drive 200 or 300 miles to one of the other Wisconsin clinics, or go as far as Chicago or Minneapolis. Another option would be in Marquette, Michigan, where a single Planned Parenthood-affiliated physician provides abortions, but the scheduling is infrequent and can be unpredictable.

“While this decision is extremely disappointing and difficult to make, we believe our staff and patients deserve the best health care environment,” said Teri Huyuck, CEO of Planned Parenthood Wisconsin, in a statement. “We remain committed to finding other opportunities to enhance abortion access. We also call on elected officials and community leaders to create a dialogue that prioritizes women’s health and stop the hateful rhetoric and smear campaigns against abortion providers that breed acts of violence.”