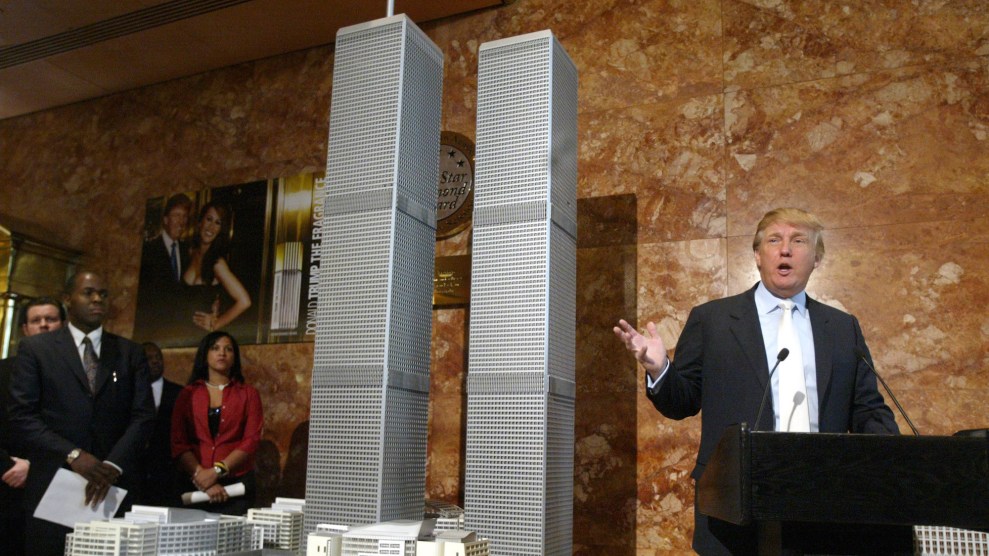 On Sunday, Americans will commemorate the 15th anniversary of the September 11 attacks. In the years since this national tragedy, Donald Trump has landed in a handful of 9/11-related controversies. Here’s a look back:

He falsely said “thousands and thousands” of Muslims in Jersey City cheered the destruction of the Twin Towers. “I watched in Jersey City, New Jersey, where thousands and thousands of people were cheering as that building was coming down,” Trump claimed at a rally last November, and refused to back down after the comments sparked a firestorm. “There were people that were cheering on the other side of New Jersey, where you have large Arab populations,” he told ABC’s George Stephanopoulos the next day. Trump also insisted, falsely, that it was “well covered at the time.”

The claim was actually a conspiracy theory that had no evidence or reports to back it up. Trump himself had made no mention of celebration at the time. Media outlets that fact-checked the claim, including the Washington Post and the Newark Star-Ledger, could find only isolated, unverified reports that small celebrations might have taken place. “There is no media record. There is no police record. There is nothing,” Jersey City’s mayor, Steven Fulop, told the Star-Ledger.

As CNN pointed out, Trump’s apartment in Trump Tower is located more than four miles from the World Trade Center, making this claim dubious at best.

He got $150,000 in economic recovery aid for small businesses for his building at 40 Wall Street. Trump was one of many big names who got recovery funds after the attack from a New York state agency called the Empire State Development Corporation. Trump’s building fit the criteria for aid: It was south of Manhattan’s 14th Street, had suffered economic harm from the attacks, and employed fewer than 500 people. But the last condition was controversial. The New York Daily News found in 2006 that the program had “ignored the federal definition of a small business and adopted a much looser standard. The ESDC used employee counts…to determine whether applicants were small businesses. Federal law requires that the size category of the types of businesses most common in lower Manhattan—finance, insurance, real estate, and law firms—be determined based on annual revenue.”

Local politicians fumed about the aid money to the Daily News earlier this year, and Rep. Jarrod Nadler (D-N.Y.), whose district includes the World Trade Center, issued an open letter demanding that Trump return the money. “On behalf of the countless New York citizens and businesses who worked so hard to heal after the terrorist attacks of September 11th, 2001, I have a simple question: When do you plan on returning the taxpayer money that was designated to ease the suffering of our city’s small business owners?” Nadler wrote in May.

He did give an eloquent defense of New York’s response to 9/11. When Sen. Ted Cruz (R-Texas) attacked what he called “New York values” during a Republican debate in January, Trump responded with a defense of the city’s spirit in recovering and rebuilding after the World Trade Center collapsed. “We rebuilt downtown Manhattan, and everybody in the world watched,” Trump said to applause, “and everybody in the world loved New York and loved New Yorkers.”

On the other hand…Trump ignored pleas to help 9/11 first responders pass the reauthorization of the James Zadroga Act, the law that set up a health care fund for the police, firefighters, and other rescue workers. Several other candidates had backed the reauthorization, but Trump remained silent despite receiving “multiple letters and calls requesting his support” from Citizens for the Extension of the James Zadroga Act, according to ABC. “Talk is cheap,” Rich Alles, one of the group’s board members, told ABC. “I’m mortified that he can stand in front of the nation…and wrap himself in the flag.”

But, as Mother Jones‘ David Corn reported in April, Trump somehow escaped widespread criticism for dodging the issue, even during the New York primary.