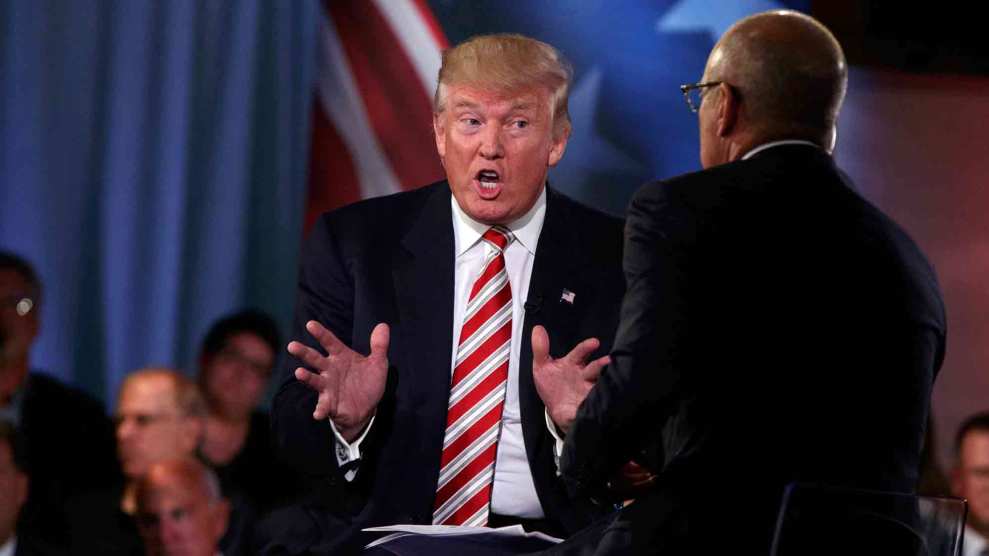 The Commander-in-Chief Forum, held on Wednesday night aboard the USS Intrepid in New York City, was a chance for Donald Trump to show off his command of military and veterans’ affairs for an audience of former servicemembers. Instead, Trump showed off a penchant for bizarre comments that he has managed to avoid in recent days by sticking to scripted speeches.

The event, hosted by Iraq and Afghanistan Veterans of America, gave Trump and Hillary Clinton 30 minutes each to field questions from host Matt Lauer and an audience made up of veterans. Former Marine officer and now National Book Award winning-author Phil Klay asked Trump what his postwar plans would be if he ever sent troops to war in a foreign country. Trump often attacks the lack of post-invasion planning in Iraq, but he stumbled with Klay’s question and mostly rehashed his frequent demand that the United States should have taken Iraqi oil as the “spoils” of the 2003 US invasion (which Trump, despite his claims tonight, supported at the time).

Donald Trump: ISIS would not have formed “if we would’ve taken the oil”#NBCNewsForum https://t.co/06DTRDCz6T

He did no better when asked about his plans to defeat ISIS. Trump has claimed he has a secret plan to defeat ISIS that he can’t talk about in public so as not to tip off the terrorist group. He also said during a speech earlier on Wednesday that he would give military leaders 30 days after he took office to come up with a plan to defeat ISIS. When Lauer pressed him on this seeming contradiction, he said within a matter of seconds that he both currently has a plan and has yet to come up with one.

Is Donald Trump’s counterterrorism plan to ask for someone else’s plan? #NBCNewsForum https://t.co/A5IN7J9S9l

Trump also claimed generals had been “reduced to rubble” by the Obama administration’s alleged refusal to follow their advice, saying that officers who gave him intelligence briefings were secretly chafing under current leadership. How could he tell? “I’m pretty good with the body language, I could tell they were not happy” Trump claimed.

Is Trump implying here he could tell his classified intel briefers aren’t happy w/ Obama b/c of their body language? https://t.co/ST5wKa7CqM

Yet Trump also attacked the current military leadership at the same time. “I have great faith in certain of the commanders, but I have no faith in Hillary Clinton or the leadership,” he said, and suggested that as president he would undertake mass firings of generals he didn’t like. “There will probably be different generals, to be honest with you.”

Perhaps most bizarre was Trump’s celebration of the resignation Luis Videgaray, Mexico’s finance minister, on Wednesday. Videgaray was reportedly a key advocate of Trump’s visit to the country last week, during which Trump met with Mexican President Enrique Peña Nieto. But Trump’s visit was wildly unpopular in Mexico, and Videgaray’s removal appeared to be a result of the fallout from the meeting. Trump took triumphant credit for the dismissal, telling Lauer “that’s how well we did” in going to Mexico City. The answer came in response to a question about whether Trump would temper his comments to foreign leaders if he were president.