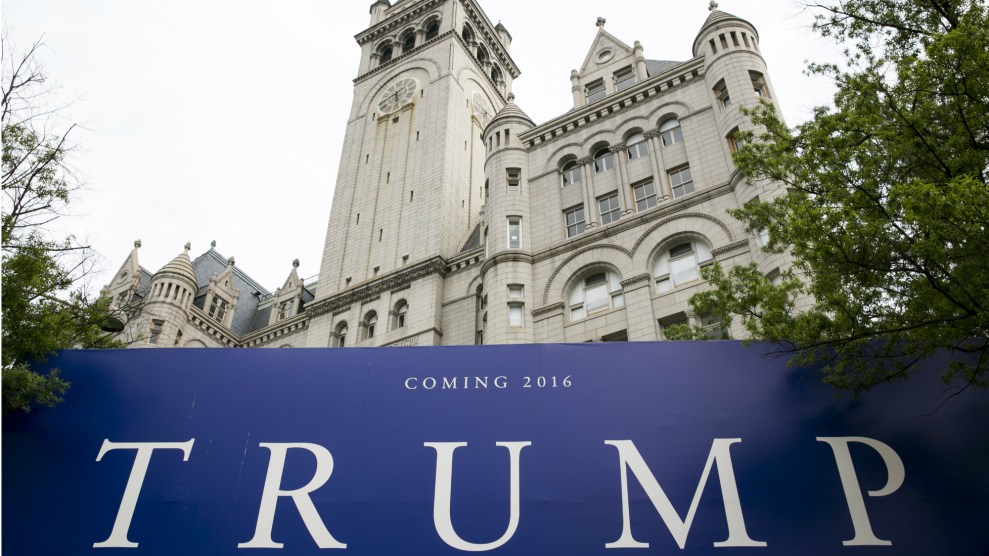 On Monday, Donald Trump’s newest hotel, located in the iconic Old Post Office Pavilion a few blocks from the White House, will open for business. But there already are signs that the $200 million project could face trouble achieving financial success—and that Trump family claims about the project were not accurate.

In 2011, when Trump submitted the winning bid to lease and renovate the historic building, which is owned by the federal government, at least one rival bidder expressed surprise regarding the terms of Trump’s offer. Trump proposed a lavish rehab estimated to cost at least $60 million more than other bidders. He also offered the government generous financial terms, under which the Trump Organization would pay annual rent of $3 million, plus a cut of any profits. In a protest filed with the General Services Administration, the government agency overseeing the project, lawyers for a competing development team noted that in order to make the hotel financially viable, Trump would have to charge some of the highest room rates in the city.

“A properly conducted price reasonableness analysis would have resulted in the conclusion that the minimum base lease proposed by Trump would require Trump to obtain hotel room revenues which are simply not obtainable in this location based on the concepts for the redevelopment,” the lawyers asserted.

After the project was awarded to Trump, a Washington Post columnist calculated that Trump’s new hotel might have to charge average rates of as much as $750 per night. At the time, Ivanka Trump responded angrily that “his numbers are pure speculation and, simply put, wrong.”

Yet it was Ivanka who was wrong. On weeknights this fall, the hotel’s least expensive rooms will go for between $735 and $995 a night. On many days, the hotel is as expensive or more so than the Four Seasons. (Ivanka Trump had said that Trump Organization originally aimed to have lower rates than this high-end hotel.) And it’s not at all clear whether Trump’s hotel can command such steep rates in a market already crowded with luxury hotels—especially because Trump’s hotel will lack some of the amenities initially promised.

Trump had said his DC hotel would feature two high-end restaurants. He had originally signed up two celebrity chefs, José Andrés and Geoffrey Zakarian, to open highly anticipated restaurants in the hotel. Then Trump launched his presidential bid by calling Mexican immigrants rapists and criminals, and both restaurateurs backed out. Trump is now suing each of them. The ongoing litigation has generated heaps of bad press for Trump. The lawsuits, coupled with Trump’s controversial statements on the campaign trail, have also made the project toxic to other well-known chefs who have apparently steered clear of the project.

Top Chef‘s Tom Colicchio, the owner of Craft and a number of other top restaurants, tells Mother Jones that he was approached by the Trump Organization after Andrés and Zakarian backed out. But he quickly turned down the offer. Colicchio says he was put off by the way the Trumps had treated Andrés, a friend, and by the GOP candidate’s comments about immigrants.

“I just flat-out said, ‘No interest,'” Colicchio recalls. “And they said, ‘Why not?’ And I said, ‘Because you’re in a lawsuit with a friend of mine!’ So, no. Never. There’s just no way I would do it, and that was the end of the conversation.”

Colicchio says the battle with Andrés has hurt Trump’s standing in the restaurant community and Trump’s comments on immigrants have made it tough to work with the reality television mogul. “He’s clearly a racist and makes racist comments, and we have an industry that has always reached out to an immigrant population and built on the work of an immigrant population,” Colicchio says. “I think that the remarks [Trump] makes would make it very difficult for anyone to stand up in front of their staff and want to be part of what he’s doing.”

Colicchio is just one of several chefs who declined to get involved with Trump’s DC hotel. As a result, the hotel will open with no top-drawer destination restaurant. Instead, it will feature just one establishment: BLT Prime, a chain steakhouse that is not likely to be a major attraction for tourists or locals. The other planned restaurant space in the hotel has been turned into a conference room. At some point, a seasonal bar might open, Ivanka Trump said in a recent deposition in the Zakarian case, according to the Washingtonian. “I would imagine nuts and crackers,” she said of its food offerings.

The loss of Andrés and Zakarian could affect the hotel’s profitability. The contracts they signed were quite lucrative for Trump. Under the deals, the chefs would have owned the restaurants, footed the bill for millions of dollars in renovation costs, and been fully responsible for any losses their operations sustained. Andrés and Zakarian would have paid rent and a percentage of their profits to Trump. The hotel, meanwhile, would have benefited from hosting two destination restaurants with almost no financial risk. When BLT Prime opens, it will be fully owned by the hotel, and the Trump Organization will pay to operate it. In other words, the Trump Organization will now bear all the financial responsibility and risk.

Perhaps worse for the Trump clan, there are signs that Donald Trump’s divisive political campaign is turning off consumers. One industry site estimates that Trump’s hotel business overall may be down by almost 60 percent.

Trump has much riding on his new DC hotel, which he toured on Friday during an unannounced detour from the campaign trail, ahead of an appearance at the Values Voters Summit. He maintains sole ownership of many of his projects. But with this development, he gave his three eldest children—Donald Jr., Eric, and Ivanka—minority stakes in the business. Ivanka, in particular, is deeply involved with the project. If the hotel fails, that will likely reflect on his kids as much as Trump himself.

In a recent deposition, Zakarian, who owns a Michelin-starred restaurant in New York City and who is a judge on the Food Network show Chopped, said the Trump kids may want to reconsider whom they were fighting in court. “If they should be suing someone, they should sue Donald senior, because he fucking did this. He did this,” Zakarian said. “He rendered this Chernobyl. He did it. So they should sue their dad.”