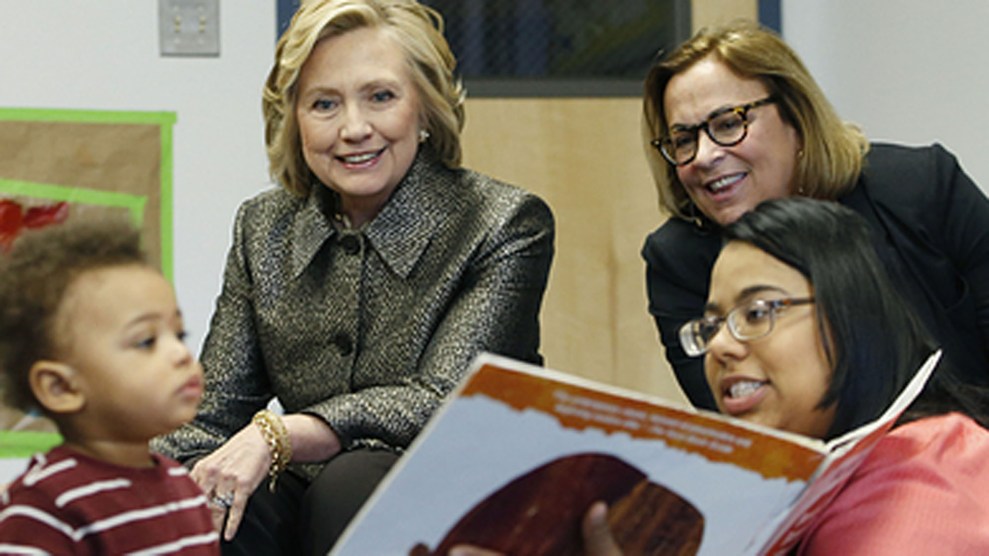 Before Hillary Clinton gave her speech at the Democratic National Convention in July, organizers fired up the crowd with a video extolling President Barack Obama’s key policies: health care reform that extended coverage to an estimated 20 million more people; the $62 billion bailout of General Motors and Chrysler that saved about 1.5 million jobs; the killing of Osama bin Laden.

But one major issue was conspicuously missing from the highlight reel of Obama’s achievements: education.

This glaring omission is just one of many signs that Clinton is distancing herself from Obama’s education policies. On her campaign website, Clinton’s K-12 page avoids any discussion of testing, accountability, or expansion of charters—the main focuses of Obama’s administration. Perhaps most telling, Clinton’s choices of advisers signal her attempt to move Obama’s test-driven K-12 agenda toward the center.

Clinton’s K-12 working policy group, according to a Democrat close to the campaign, comprises a mix of teachers’ union leaders, proponents of test-driven reforms, and advocates for increased investments in underfunded schools.

The inclusion of teachers’ union leaders—who were not advising Obama’s campaigns and are among some of the most powerful opponents of his education policies—marks an especially sharp break from his administration. By contrast, many of Obama’s advisers—and later staffers at the Department of Education—viewed teachers’ unions as obstacles to school improvement and had close ties to the Gates Foundation, which championed many federal policies that encouraged both numbers-driven teacher evaluations and charter schools.

“Obama had positioned himself as a reformer…With Clinton, you see an agenda that leans much more toward teacher unions.”

But while Clinton’s K-12 advisers may suggest a more teacher-friendly approach to policy, they don’t exactly indicate that, if elected, she would push for the end of test scores in policy decisions. The Center for American Progress, a progressive DC-based think tank closely aligned with Clinton, has been generally supportive of Obama’s test-based education policies; meanwhile, as education secretary, Riley helped lay the foundation for the modern standards and accountability movement.

Still, Clinton’s teacher-friendly speeches and lack of emphasis on test-based accountability are making many of the reform groups that had influence in the Obama administration nervous. “There’s a lot of anxiety about the transition from this president to the next administration,” said Shavar Jeffries, the president of a think tank affiliated with Democrats for Education Reform, a powerful pro-testing group, during a recent education forum.

“Obama had positioned himself as a reformer who was unapologetically for charter schooling, teacher evaluations, the notion of common standards,” said Rick Hess, a veteran education policy expert with the conservative American Enterprise Institute. “With Clinton, you see an agenda that leans much more toward teacher unions than the Democrats for Education Reform.” 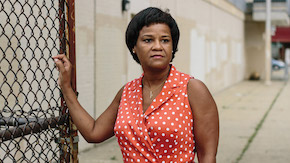 We’re Losing Tens of Thousands of Black Teachers. Here’s Why That’s Bad for Everyone.

Most of Clinton’s shift has to do with two of Obama’s relatively small but widely unpopular federal programs: Race to the Top and School Improvement Grants. These initiatives offered about $9 billion in grants that were tied to prescriptive policies like evaluating teachers based in part on student test scores and to dramatic school “turnarounds,” which included closings and mass firings of teachers. Even though these grants contributed just a tiny fraction to state education budgets (for example, Race to the Top accounted for 0.63 percent in New York in 2011), they had an outsize impact on schools: The numbers of standardized tests and curricula that mimicked multiple-choice questions exploded, especially in schools serving low-income black and Latino students. And as districts fired staff or closed schools with low scores, thousands of educators, especially black teachers, lost their jobs or left teaching all together.

In the last three years, opposition to these policies has gained a lot of steam. Last year, for example, 1 in 5 students in New York opted out of standardized tests, forcing policymakers to remove test scores from teacher evaluations. In August, Black Lives Matter organizers called for a moratorium on both public school closures based on test scores and the expansion of charters to replace them. Many of these opponents argue that test-based reforms haven’t been working: While racial achievement gaps have narrowed slightly since 2001, they remain stubbornly large and shrank far more dramatically before No Child Left Behind (NCLB), when policies focused on equalizing funding and school integration, rather than on test scores.

Perhaps because of how divisive school reform has become among Democrats, Clinton’s education campaign so far has poured most of its energy into its early-childhood initiative—an education issue that has more allies in Congress than any other and has been one of Clinton’s signature issues for decades. There is also a growing pile of evidence that investments in early childhood for poor kids may have bigger returns than a focus on raising test scores. Obama already pushed for expansion of pre-K education, and Clinton wants to make preschool universal for four-year-olds and double the number of children enrolled in Early Head Start, which includes home visits by a social worker or nurse during pregnancy and parent coaching in the child’s first three years. Paul Tough, the author of Helping Children Succeed, found that the United States spends only 6 percent of all public early-childhood dollars on interventions targeting the child’s first two years, even though that’s when kids’ brains are most malleable for positive development. (The rest goes to kids ages three to six.)

When it comes to reform ideas after preschool, Clinton’s campaign page contains relatively few policy details. It does call for investing in K-12 teachers and schools through a “national campaign to elevate and modernize the teaching profession,” rebuilding crumbling public school buildings, and increasing funding for teaching computer science. The boldest and most detailed section discusses the need to disrupt the “school-to-prison pipeline”; Clinton promises to send $2 billion to states to reduce suspensions and expulsions that disproportionately affect black students and “implement social and emotional support interventions.”

Clinton has made clear in speeches that she supports testing, but she has said she wants to have “better and fewer tests”—a position that mirrors comments from both Obama and Duncan over the past two years. Meanwhile, on accountability—which measures to use to evaluate schools and teachers, and what to do when they are not meeting the mark—Clinton’s campaign pages and speeches haven’t offered much detail. But that’s in large part because the new Every Student Succeeds Act, which replaced No Child Left Behind last year, moves these decisions largely to states, and the specifics of its implementation are still being hashed out in Congress.

Many nations with higher-performing students, like Finland, Singapore, and Australia, already use fewer and broader tests for accountability. In these countries, standardized tests are used in combination with real student work, graded by trained teachers, to measure the performance of schools, as NPR’s lead education blogger, Anya Kamenetz, documents in her book The Test. Stanford professor Linda Darling-Hammond—who was considered for the secretary of education job after Obama was first elected, and could again be a top contender if Clinton is elected—has been calling for a similar accountability system in the United States. A 2014 testing-reform plan co-authored by Darling-Hammond recommends fewer multiple-choice tests and increased capacity at the local and state level to develop yearly “performance assessments”—student work that reflects what professionals actually do in the real world, like essays, group work, individual presentations, and science projects.

But that’s just one piece of the larger puzzle, according to José Luis Vilson, a veteran math teacher in New York City and the author of This Is Not a Test: A New Narrative on Race, Class, and the Future of Education. Vilson hopes to see increased investments in professional development and coaching of teachers, far beyond the three to five hours a week that’s typical in American public schools. Teachers in Finland, Singapore, and South Korea spend 15 to 25 hours each week working to improve their craft.

In a radio interview this year, Clinton said, “The federal government has an opportunity—and I would argue an obligation—to help equalize spending” on schools.

Today, the push to create fewer and better tests and improve teacher training faces the biggest obstacles in the schools that need them the most: those with large numbers of low-income students. In the past 10 years, the per-student funding gap between rich and poor schools has grown by 44 percent. The Title I program, a federal initiative created to equalize these disparities, is broken: A 2016 investigation by USA Today found that 20 percent of Title I money ends up funding affluent school districts. Meanwhile, a majority of US public school students come from low-income families, and about 10 percent of them live in deep poverty—in families that earn less than $11,000 a year.

Clinton has expressed support for more federal funding for poor students and those with special needs in her speeches. In a radio interview this year, Clinton said, “The federal government has an opportunity—and I would argue an obligation—to help equalize spending” on schools.

Jonathan Stith, who as national coordinator of the Alliance for Educational Justice worked closely on the development of the Black Lives Matter policy agenda, said he is encouraged to hear a call for higher investments in struggling schools. But he’s disappointed that Clinton’s K-12 agenda lacks detail and doesn’t include any discussion of systemic racism in education. “The agenda’s vague language can be seized by states to continue to do these same school ‘turnaround’ and push-out policies that have contributed in part to the rise of the Movement for Black Lives,” Stith said.

Ultimately, Stith and others agreed that Clinton’s biggest choices are still in front of her. Whether issues of race, better tests, and access to high-quality education will be addressed with meaningful policy will depend a great deal on the types of advisers and staffers she’d select as president, said Samuel Abrams, researcher at the Columbia Teachers College and author of Education and the Commercial Mindset. Abrams, who was a high school teacher for 18 years, argued that most advisers, staffers, and policymakers in the Education Department must have a proven record of success with the hardest-to-reach kids. “I failed so many times as a teacher,” he said. “Until you understand the complexities of why and how that failure happens, you won’t make good policy in education.”