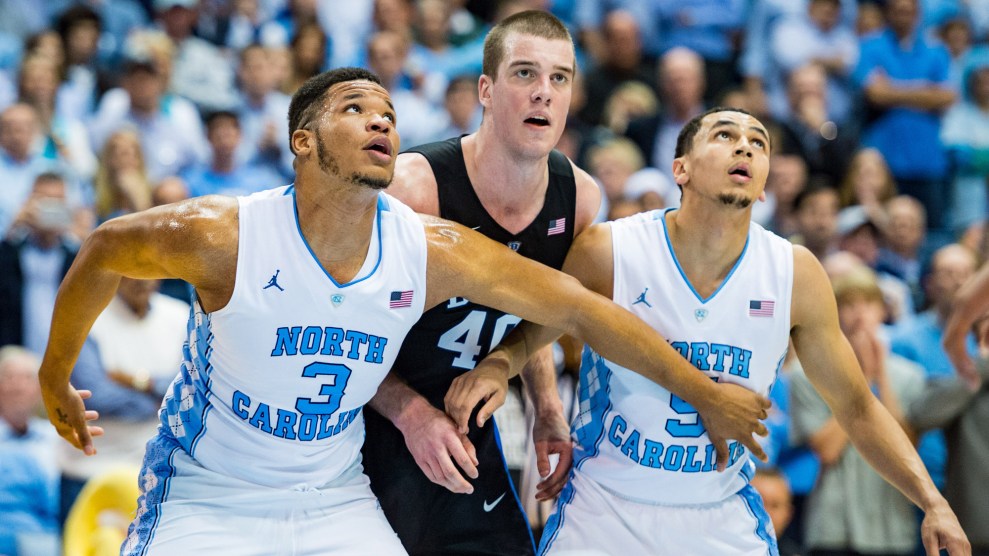 Update 9/14/16, 1:46 p.m.: The Atlantic Coast Conference on Wednesday announced it would pull all championships from North Carolina for the 2016-17 academic year over the state’s bathroom bill.

Tensions over North Carolina’s infamous “bathroom bill” exploded on Monday, as the NCAA announced it would move seven championship events out of the state and the North Carolina Republican Party responded by accusing the collegiate sports association of “political peacocking” and endangering women.

Gov. Pat McCrory signed the sweeping anti-LGBT bill, known as HB2, into law in March. The measure strips workplace discrimination protections from the state’s workers and requires transgender people to use bathrooms corresponding to their biological sex, not their gender identity. In response, the National Basketball Association announced in July that it was relocating its annual All-Star Game from Charlotte to New Orleans, costing Charlotte an estimated $100 million in economic benefits. Businesses from PayPal to Deutsche Bank have called off expansion plans in the state, and musicians, including Bruce Springsteen, have canceled shows in protest.

On Monday, the NCAA announced it would move its March basketball tournament and six other championship events from the state “because of the cumulative actions taken by the state concerning civil rights protections.”

The North Carolina Republican Party responded swiftly and fiercely, defending the law in an incisive rebuke of the NCAA for “political peacocking.” In a statement, state GOP spokesperson Kami Mueller said:

This is so absurd it’s almost comical. I genuinely look forward to the NCAA merging all men’s and women’s teams together as singular, unified, unisex teams. Under the NCAA’s logic, colleges should make cheerleaders and football players share bathrooms, showers and hotel rooms. This decision is an assault to female athletes across the nation. If you are unwilling to have women’s bathrooms and locker rooms, how do you have a women’s team? I wish the NCAA was this concerned about the women who were raped at Baylor. Perhaps the NCAA should stop with their political peacocking and instead focus their energies on making sure our nation’s collegiate athletes are safe, both on and off the field.

In the hours following the NCAA’s decision, McCrory did not issue a public statement.

In explaining its decision, the NCAA’s board of governors noted that the state law offered protections for public officials to “deny services to the LGBT community.” It pointed out that five states had banned public employees and “representatives of public institutions” from traveling to North Carolina in response to the law, and that in July, the University of Albany announced it had canceled a November 12 game against Duke University following an executive order signed by New York Gov. Andrew Cuomo that barred travel to North Carolina. At the time, Duke head coach Mike Krzyzewski called the North Carolina law “embarrassing.”

“Fairness is about more than the opportunity to participate in college sports, or even compete for championships,” said NCAA President Mark Emmert in a press release. “We believe in providing a safe and respectful environment at our events and are committed to providing the best experience possible for college athletes, fans and everyone taking part in our championships.” In an interview with CBS on Tuesday, Emmert called the decision to move a “no-brainer.” When asked about Mueller’s comments regarding the association’s handling of sexual assaults, Emmert said, “The two issues are completely unrelated. The HB2 decision is one that engenders opinions on both sides of the aisle. It’s a political season. That’s unfortunate, and people are going to have these types of comments.”