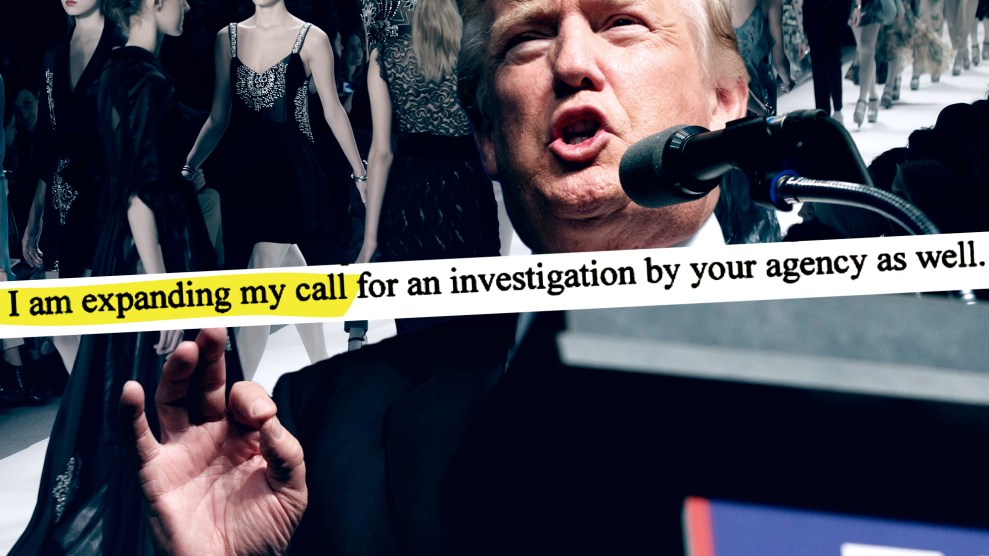 On Wednesday morning, Sen. Barbara Boxer (D-Calif.) intensified her push for a federal investigation into Trump Model Management, the GOP nominee’s New York modeling firm. Last week, Boxer called on the the director of the US Citizenship and Immigration Service (USCIS), part of the Department of Homeland Security, to launch an inquiry into the company’s immigration practices, following a Mother Jones investigation that cited three former models who say they worked for the company illegally.

After speaking to former Trump model Rachel Blais (who is featured in Mother Jones‘ story), Boxer today requested that the Department of Labor investigate the agency’s employment practices, which include hiring models as young as 14 and allegedly housing them, as many as six to a bedroom, in tight communal living quarters.

“Blais was particularly concerned about the treatment of girls, some as young as 14, who were actively recruited by the modeling agency,” Boxer wrote in the letter to Secretary of Labor Tom Perez. “She told me that many underage girls lived with her in cramped dormitory-style living arrangements.”

She added: “As you know, our labor laws were written to protect workers, especially children, young women and other vulnerable populations, from mistreatment and exploitation.”

The letter details several questions Boxer would like the Labor Department to look into, including whether Trump’s agency sought to “violate federal laws that seek to protect workers from unfair treatment and wage theft,” and whether or not underage models were being lawfully cared for by the company.

“We need to protect our children!” Boxer wrote in blue marker at the end of the letter. Read the full letter here: 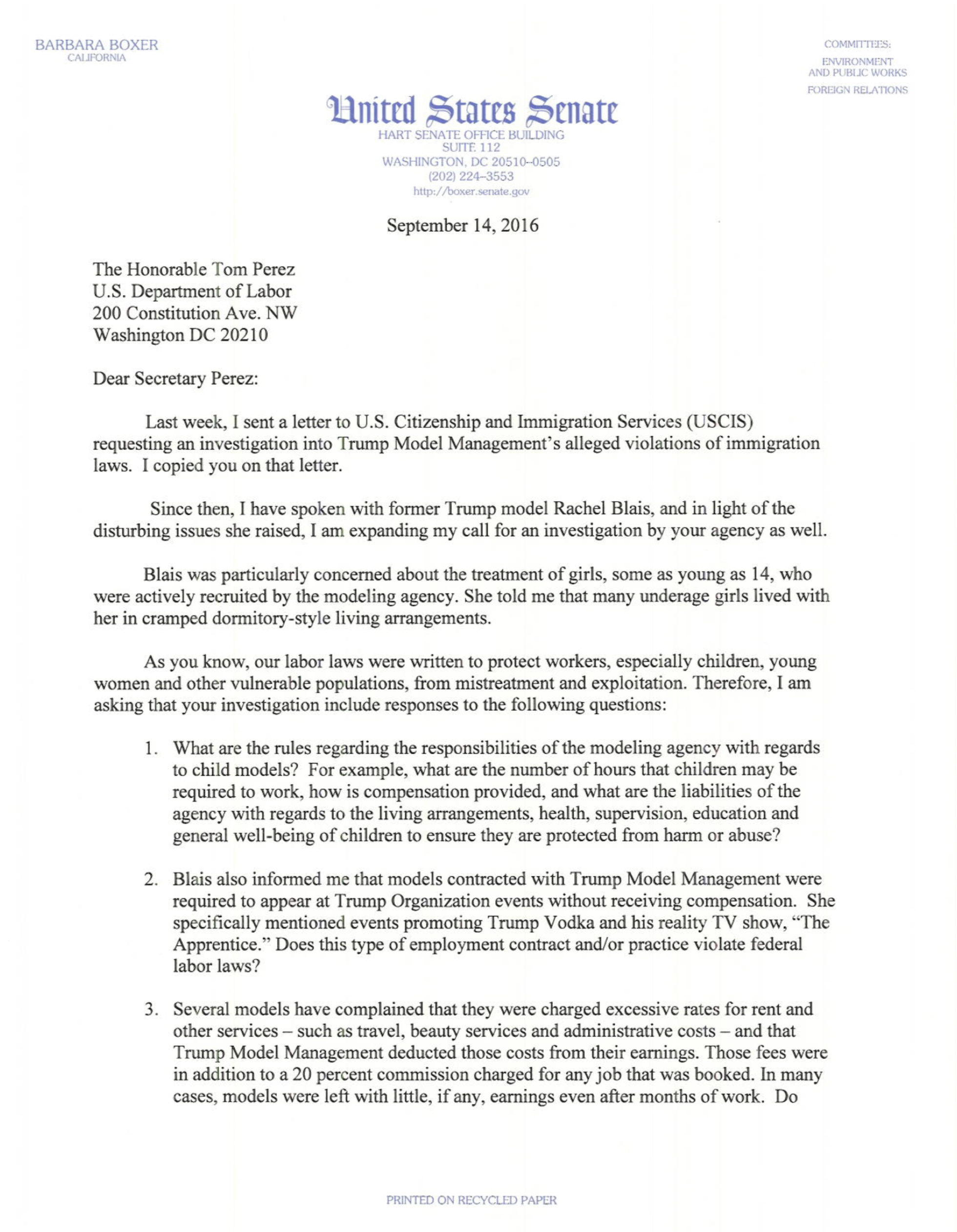 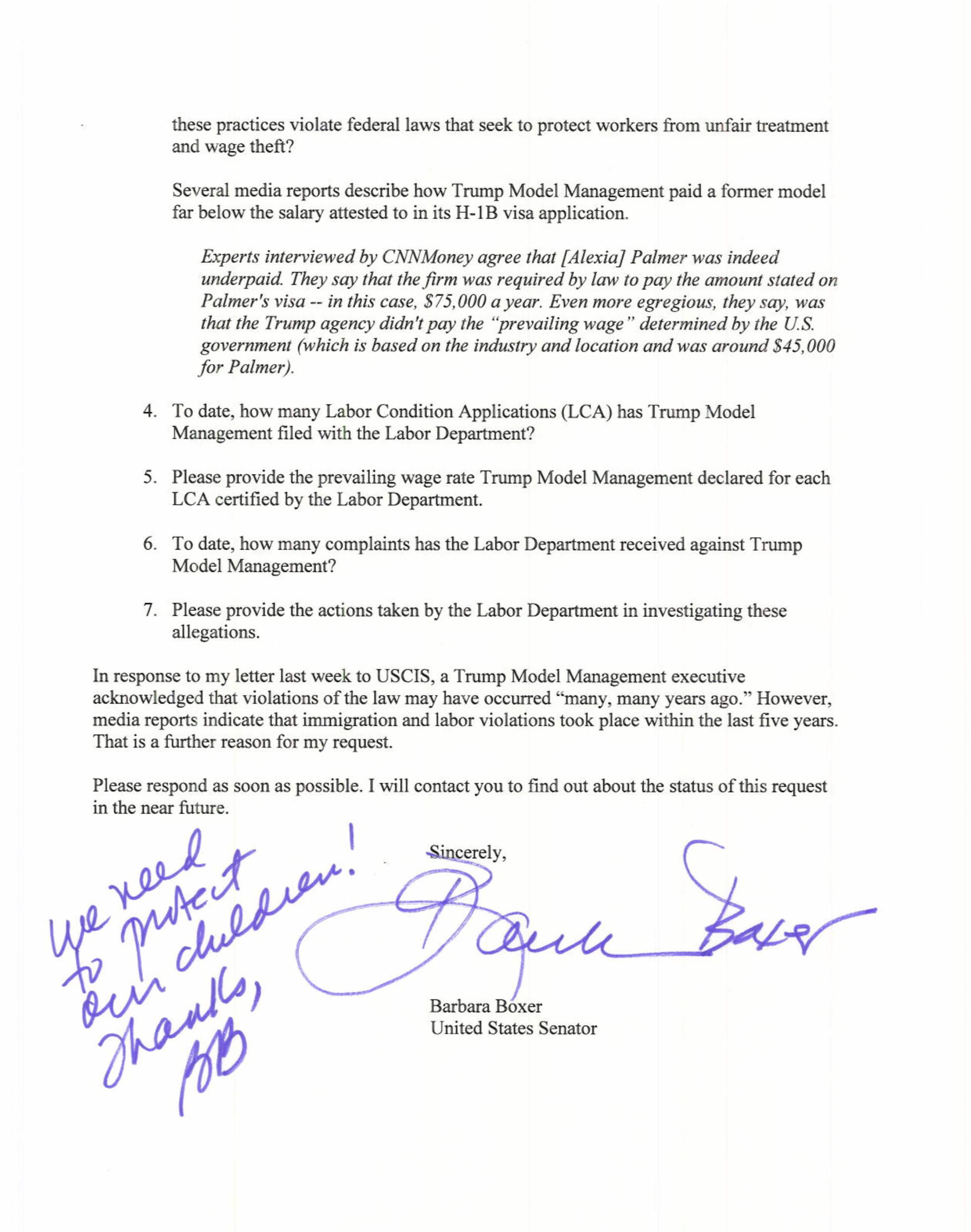 Mother Jones‘ investigation into Trump Model Management revealed that foreign models effectively competed for work visas while performing a range of modeling jobs for the company while in the United States as tourists, including posing for high-profile magazine shoots and runway appearances. Two former models also described how they were encouraged by Trump’s company to evade customs officials when they came into the country—including lying about their New York addresses on federal customs forms. While they were working for the company, the models recalled living in a basement dormitory in New York’s East village that could be occupied by 11 or more people. Rent for a single bunk in the apartment could run $1,600 per month and was deducted from the models’ earnings—if they made enough to pay off the debt in New York’s competitive industry.

The immigration practices that the former Trump models described pose a stark contrast to the hardline stance on immigration that Donald Trump has taken on the campaign trail. Trump’s running mate, Gov. Mike Pence of Indiana, described the allegations as “sidebar” issues.

So far, no one from Trump’s modeling agency has responded to multiple inquiries from Mother Jones. But last Thursday, Ronald Lieberman, executive vice president for management and development at the Trump Organization, commented on the story to Bloomberg BNA. He did not deny that foreign Trump models had worked in the United States without proper visas, saying only that the cases highlighted in Mother Jones‘ story happened “many, many years ago.”