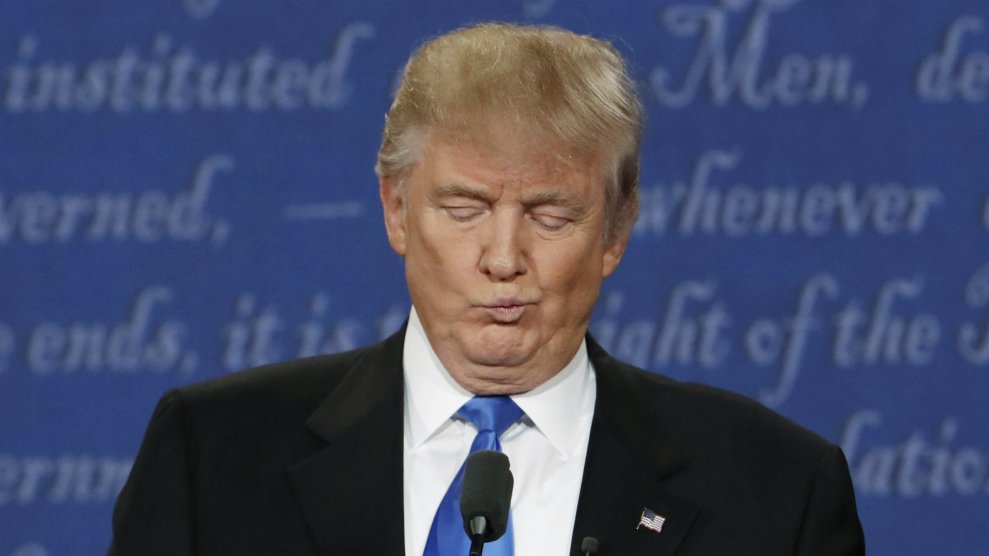 The Clinton campaign has released sharp ads attacking Donald Trump for his erratic temperament, his long history of misogynistic remarks, and his lack of foreign policy experience. But one of the most eviscerating ad efforts of the fall (so far) has come from a progressive outfit in Ohio, which has launched a series of spots slamming the GOP presidential nominee for having repeatedly stiffed contractors.

The effort was inspired by a June USA Today article that reported that Donald Trump has been involved in more than 3,500 lawsuits, with many of them involving contractors and individuals who claimed that Trump or his companies had not paid them for the work and services they provided. This story bolstered one of the anti-Trump themes of the 2016 campaign: that this guy is a cheapskate who screws the folks who work for him. In fact, in February, Kellyanne Conway, months before becoming Trump’s campaign manager, denounced Trump on this front, saying he had “actually built a lot of his businesses on the backs of the little guy” and had a history of “not paying contractors after [they’ve] built something” for Trump. And at the first debate between Trump and Hillary Clinton, the Democratic nominee asked Trump, “[Do the] people that you have stiffed over the course of your business not deserve some kind of apology from someone who has taken their labor, taken the goods that they’ve produced and then refused to pay them?” Trump, replying to one case, huffed, “Maybe he didn’t do a good job, and I was unsatisfied with his work.”

This was one of the worst moments for Trump during that debate, and ProgressOhio, a liberal group, is hoping to keep this line of attack alive in perhaps the most crucial of the swing states. The organization has created several ads featuring first-person testimonials of contractors who say Trump skipped out on paying them. In one ad, a contractor hired to work at Trump’s Taj Mahal casino in Atlantic City, New Jersey, maintains that Trump did not pay his small, family-run business a $232,000 bill. Due to this loss, he says, “My dad had to lay off his own brother.”

Here are the ads:

So far, the ads have only been disseminated online by ProgressOhio and two other progressive groups: MoveOn and Working America. Actor Mark Ruffalo did tweet them out to his 2.7 million followers. And now ProgressOhio is aiming to bring them to the airwaves. It plans to start by broadcasting the ads only in Toledo. If it can raise more funds, it will look to air them in other parts of the Buckeye State. No doubt, it would be happy to share these ads with other groups with the resources to place them on television in other states.

One of the best ads of the 2012 campaign focused on a worker at a factory taken over by Romney’s Bain Capital who built a stage on which company execs later announced the facility was being shut down. The spot personalized a major criticism of Romney’s business career. The ProgressOhio ads seek to do the same for Trump, and they target an audience that Democrats are nervous about: economically insecure, blue-collar white guys who may be susceptible to Trump’s fist-pounding attacks against the elites. The point here is obvious—to show these voters that Trump is no friend of working man and women. This sort of assault was highly effective against Romney four years ago. It may well become a more prominent feature of the 2016 campaign in the weeks to come.