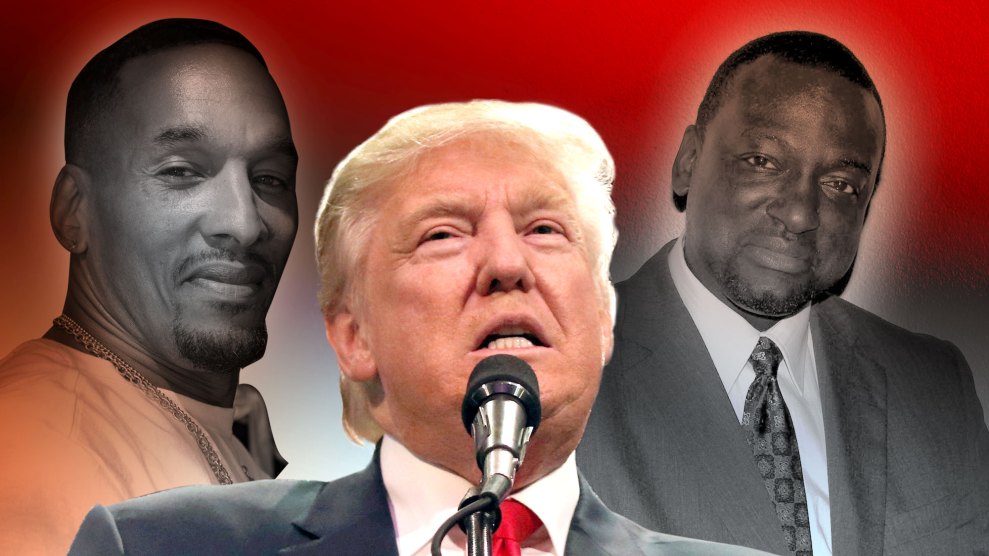 After Donald Trump reaffirmed his long-held belief this week that the men known as the Central Park Five were guilty in an infamous, decades-old rape case, two members of the since-exonerated group blasted Trump in interviews with Mother Jones, calling him a “stunt artist” and saying “he’s gotten worse” since his involvement in their 1990 conviction.

“You have a person who’s supposed to be a very intelligent business man, and what I’m sure he would do if he was trying to purchase a property is do his due diligence,” Yusef Salaam told me Friday, noting that Trump continued to ignore the facts of the Central Park Five case. “For somebody to still stand on the side of injustice like Donald Trump is, that becomes a very scary place to be.”

“For somebody to still stand on the side of injustice like Donald Trump is, that becomes a very scary place to be.”

In a statement to CNN this week, Trump said he still believed the Central Park Five were guilty. “They admitted they were guilty,” he told CNN’s Miguel Marquez. “The police doing the original investigation say they were guilty. The fact that the case was settled with so much evidence against them is outrageous. And the woman, so badly injured, will never be the same.”

In 1989, five black and Latino teenagers were convicted of brutally attacking a young white jogger in New York City’s Central Park. The crime, which came at the height of the crack epidemic and skyrocketing crime rates, enflamed racial tension in the city. About two weeks after the incident, Trump published a full-page ad in four major New York newspapers calling for the teens to be brought to justice—and suggesting that they should face the death penalty. But in 2002, all five men—who spent between 6 and 13 years in prison—were exonerated based on DNA evidence and a confession from the actual perpetrator, whose DNA was shown to match evidence at the scene.

Mother Jones talked to two members of the Central Park Five—Salaam and Korey Wise—about Trump’s role in their case, their thoughts on his presidential candidacy, and his latest comments about their case. Not surprisingly, neither is happy to see one of their main antagonists on the national stage day in and day out. Nor is a third member of the group, Raymond Santana, who skewered Trump on Twitter:

What more do we have to prove? I’m tired of proving our innocence! I don’t care what this asshole thinks @realDonaldTrump #centralpark5

Salaam, who was 15 when he was jailed for the assault, said he believes Trump played a crucial role in the media campaign against him.

“[Trump] was one of the fire starters—really the main fire starter—because his name held a lot more weight,” he said. His ad facilitated “the conviction that was going to happen in the public arena prior to us even getting into the courthouse.”

Wise told me he only learned about Trump’s ad after watching a documentary on his case several years ago. After seeing it, he understood why the case had become so incredibly charged. “I said, ‘Wow! Wow! Wow!'” Wise said. “This is where a great deal of the energy that was directed at me in terms of physical threats” came from.

“The ad was talking about and goes specifically into fears that the public was having at that particular time,” Salaam told me. “He’s talking about how ‘we’ve had to give up our leisurely stroll in the playground, and we can’t ride our bikes, or we can’t walk around in the streets because now we’re hostages, ruled by the laws of the streets.'” Trump has revisited those themes in his presidential campaign, often citing gun violence in cities like Chicago as indicative of a breakdown in “law and order,” which he insists he can restore.

“If he becomes president, what is that going to mean for the people who are losing their lives in the street?”

Salaam also suggested that Trump was a hypocrite for attacking Hillary Clinton over her “superpredator” remarks in the first presidential debate. “She well within her right could have said, ‘Well you took out a full-page ad calling for the execution—the lynching, the death—of young black and Latino men—and you have never apologized.'”

For his part, Wise said he doesn’t think about what a Trump presidency would mean because he doesn’t take him seriously: “He’s a stunt artist…He follows publicity.”

But Salaam had a bleaker assessment of what the country would look like with Trump as commander in chief: “If he becomes president, what is that going to mean for the people who are losing their lives in the street? This ‘law and order’ is going to be a very, very scary thing for us as a people.”