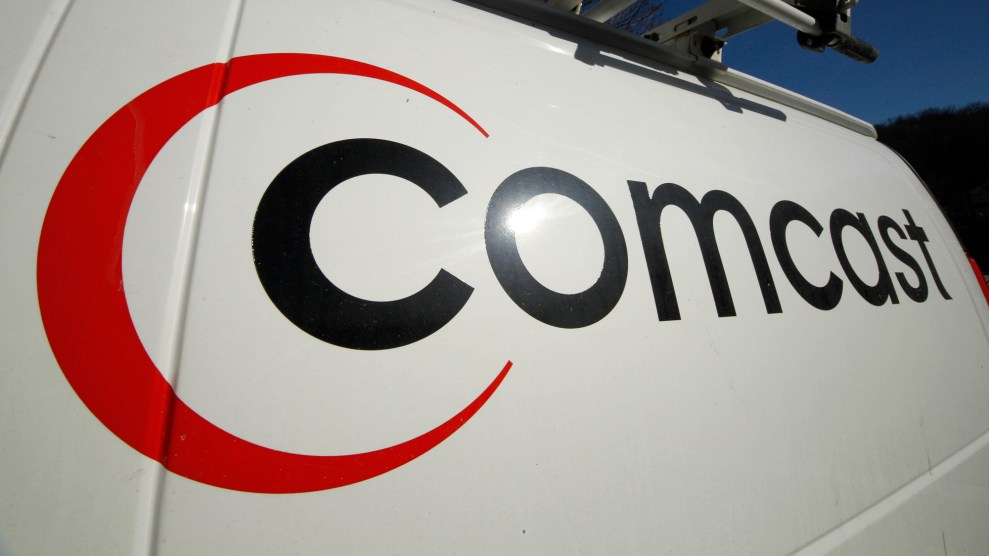 There are few things people agree on in this world more readily than their abhorrence of Comcast. Thanks to its price gouging and infamous customer service, the odious telecom monopoly was named Consumerist‘s “Worst Company in America” in both 2010 and 2014. The company has even been criticized for violating free-speech provisions via throttling—the intentional slowing of internet service to certain websites. Now, Comcast is under fire for messing with political advertisements in Oregon.

Oregon has the lowest corporate tax rate in the country.

First, a little background: Oregon has the lowest corporate tax rate in the country. Corporate income tax contributions have dropped by nearly two-thirds since the mid-1970s, with companies currently paying just 6.7 percent of the state’s income tax, less revenue than is brought in from the Oregon Lottery. And out-of-state companies further capitalize on this situation by taking advantage of loopholes that minimize their property tax obligations.

Policy groups like the Oregon Center for Public Policy have bemoaned how this piddling levy favors the wealthy and out-of-state companies at the expense of public services. So this year, voters in the Beaver State will get to decide on Measure 97, which proposes to raise corporate tax rates on companies that do more than $25 million in sales at a rate of 2.5 percent on all sales beyond that $25 million threshold. The added tax revenue would go to education, health care, and senior services.

Measure 97, though just a state ballot proposal, has become a national battleground, already drawing millions in out-of-state money, putting it on track to become among the most expensive measures in the state’s history. More than $17 million has been donated to the opposition campaign, much of it from out-of-state corporations including—you guessed it—Comcast, which pitched in $465,000 of its own cash to “Defeat the Tax on Oregon Sales.”

The “Yes on 97” campaign produced and purchased air time for three separate ads to be shown on cable television throughout the state. Some of those ads mentioned Comcast (see below) as one of the out-of-state corporations that would be targeted by the measure for its minimal tax contribution in Oregon.

One such ad had been running on cable television for about a week when, according to Katherine Driessen at Our Oregon, the Yes on 97 group received word that its spots had been flagged and blocked by Comcast. After days of confusion without any follow-up, the group was ultimately told by Comcast Spotlight, the company’s advertising division, that it had to remove mention of the company if it wanted the ads back on the air. “I got a call saying that we would need to remove any reference to Comcast, including their logo, from all ads,” said John Coghlan, the ad buyer in the Yes on 97 campaign.

Comcast already has a particularly poor reputation for its taxpaying in Oregon, and has been to court over its outstanding tax obligations there. Our Oregon thinks Comcast should be paying millions more in state property taxes. So as you can imagine, the telecom company’s request to disappear from the Yes on 97 ads infuriated the measure’s supporters. Especially when Comcast issued a statement to a local news station stating that the changes to the Yes on 97 ads were made “to protect the company’s brand.”

“It certainly doesn’t feel right when they have a clear interest in the matter,” said Robert Drechsel, director of the Wisconsin’s Center for Journalism Ethics.

But there’s probably nothing illicit about Comcast’s actions. Comcast is a private company, not a public utility nor a common carrier, which means it maintains private control over its content. “It certainly doesn’t feel right when they have a clear interest in the matter,” said Robert Drechsel, director of the Center for Journalism Ethics at the University of Wisconsin-Madison, “but I don’t think there’s any way to classify what they’re doing as illegal.”

Still, Coghlan, the ad buyer in the Yes on 97 campaign, said he’s never seen anything like it. In response to a request for a comment, Sena Fitzmaurice, a spokeswoman for Comcast, stated in an email that “Comcast is currently running advocacy ads for both sides of Measure 97, including ads from ‘Yes on 97.'”

The Yes on 97 ads are back on the air with one notable change—now, Wells Fargo stands in Comcast’s stead as corporate tax-avoiding exemplar. And despite starting strong in the polling, weeks of attack ads have battled back public support for Measure 97. Oregon Public Broadcasting reported Monday that Measure 97 would be a “nail biter”: only 43 percent of poll respondents now say they’re planning to vote for it, down from 60 percent in September.