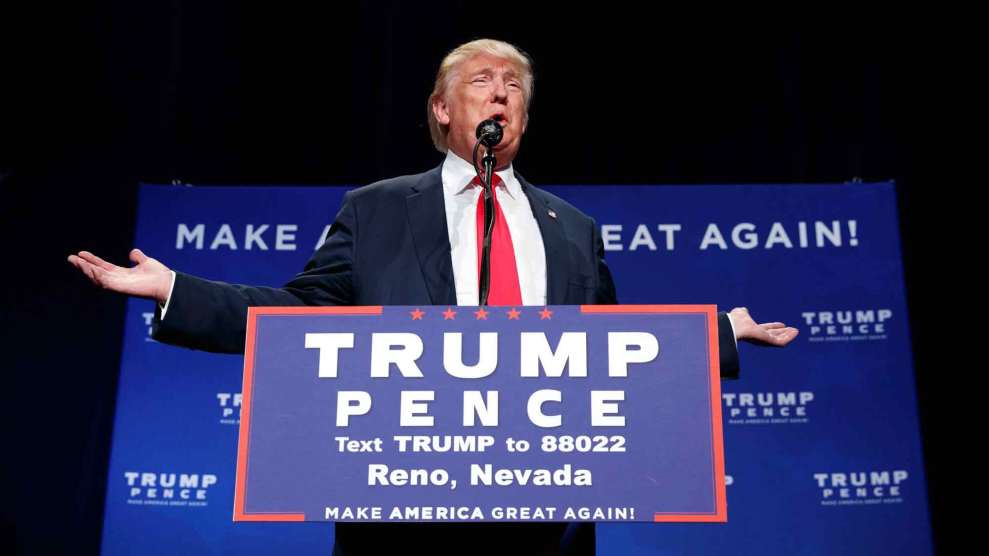 During the vice presidential debate on Tuesday night, when the subject turned to foreign policy, Trump campaign HQ zapped out a press release headlined, “Donald J. Trump’s Plan to Defeat ISIS and Make America Safe Again.” This was curious, because throughout his presidential bid, Trump has proclaimed that he has a “secret” plan for defeating the murderous Islamic extremist group that controls parts of Iraq and Syria. He has refused to reveal it, claiming that would tip off the enemy. But he has also promised that in the first 30 days of a Trump administration, he would ask the generals for an anti-ISIS plan. Which is confusing because he has also said he knows more about ISIS than the generals and that he would fire most of the generals. Still, at the same time, Trump brags that he does have his own plan that he can share publicly. That’s what he sent out and what’s posted on his campaign website. Yet here’s one big rub: It’s essentially the same plan as President Barack Obama’s and Hillary Clinton’s.

In the press release, Trump presented his plan in three main points:

Work with Arab allies and friends in the Middle East? That’s what’s already happening. One of the main forces combating ISIS is the Iraqi military, which the United States has been supporting for years. And the Obama administration has been working with Iraqi militias, other nations in the region, and the Kurds to beat back ISIS.

Aggressively pursue joint and military operations? Check. As of late July, the Obama administration in conjunction with its partners in the region had conducted nearly 14,000 airstrikes against ISIS. There are airstrikes on a daily basis in Iraq and Syria, and Obama has extended the campaign into Libya. Numerous top-level ISIS commanders have been killed (and so have civilians). The United States and other nations have also attempted to block ISIS oil trading and to cut off funding to the terrorist organization—with some limited success. The Obama administration has indeed tried to counter ISIS propaganda online and off in order to counter the spread of ISIS’s ideology. But this has proved to be a tough task.

The only unique action that Trump calls for as part of his strategy to vanquish ISIS is declaring “radical Islamic terrorism” the enemy—that is, a rhetorical flourish. This is a conservative/Republican talking point, but it means little in practical terms. The main players in the region with which the United States is partnering are Islamic governments. Declaring a war on anything Islamic is not likely to enhance those alliances necessary for confronting ISIS on the ground. As part of the plan he touted on Tuesday night, Trump also calls for “new screening procedures” for immigrants from “volatile regions of the world that have a history of exporting terrorism.” Whatever the merits of this move, it would not affect the effort to break ISIS’s strongholds in Iraq, Syria, and Libya. Ditto for the provision in Trump’s proposal to establish a “Commission on Radical Islam to identify and explain to the American public the core convictions and beliefs of Radical Islam.” (By the way, a decade ago, Trump called for a quick pullout of US troops from Iraq, saying he didn’t care if this would lead to an increase in bloodshed and terrorism.)

On Clinton’s website, she outlines her approach for kicking ISIS in the teeth. It includes “intensifying the coalition air campaign against ISIS fighters, leaders, and infrastructure; stepping up support for local Arab and Kurdish forces on the ground; and pursuing a diplomatic strategy aimed at resolving Syria’s civil war and Iraq’s sectarian conflict between Sunnis and Shias—both of which have contributed to the rise of ISIS.” This is what Obama has been trying to do. (Trump has indicated that he’s willing to give Russia free rein to launch airstrikes in Syria, even though Russia’s military operations there have caused civilian casualties and exacerbated the ongoing humanitarian disaster.) Clinton also calls for working with “our allies to dismantle the global terror network that supplies radical jihadists with money, weapons, and fighters.” How? By working with European intelligence services, by slamming ISIS affiliates throughout the region, and by “working with tech companies to fight jihadist propaganda online, intercept ISIS communications, and track and analyze social media posts to stop attacks.”

The bottom line is that there’s not much disagreement about the basics of a counter-ISIS strategy. Trump harshly criticizes Obama and Clinton—absurdly claiming they were the “founders” of ISIS—but offers nothing new in terms of policy. Defeating ISIS is a complex challenge with no easy answers or quick fixes. What probably matters most is not which candidate has the best three-point plan, but which potential commander in chief is the most competent, the most knowledgeable, and the best able to understand and deal with the nuances and complications of this damn difficult task.