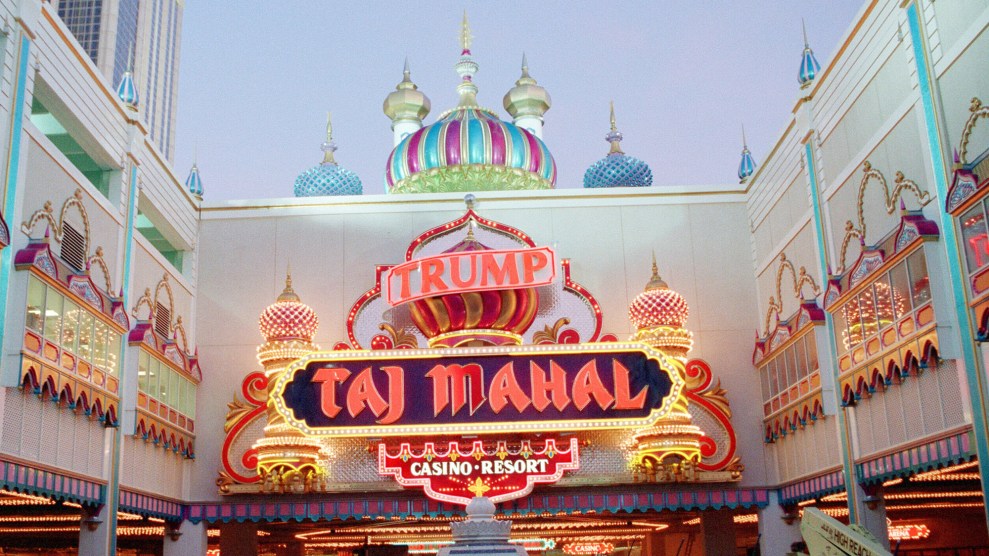 The Trump Taj Mahal in Atlantic City in 1990Tony Ward/ZUMA

When pressed about the multiple bankruptcies at his Atlantic City casinos, Donald Trump routinely says the episodes highlight his business acumen. He made out well, he claims, at the expense only of his greedy Wall Street financiers. “These lenders aren’t babies,” he said during a Republican primary debate last fall. “These are total killers. These are not the nice, sweet little people that you think, okay?”

Yet among those who suffered as a result of Trump’s bankruptcies were his own casino employees, who collectively lost millions of dollars in retirement savings when the company’s value plummeted.

Trump’s company encouraged its employees to invest their retirement savings in company stock, according to a class-action lawsuit filed by employees against Trump Hotels & Casino Resorts following its 2004 bankruptcy. Then, when the stock price was near its nadir as bankruptcy loomed, the company forced the employees to sell their stock at a huge loss. More than 400 employees lost a total of more than $2 million from their retirement accounts, the lawsuit states.

The lawsuit was ultimately dismissed when a judge found no illegal actions on the part of Trump’s company. But the conflict shows how Trump’s exploitation of bankruptcy laws for his personal gain did end up hurting his employees.

“I didn’t realize he was as stupid as he is,” says a former casino worker at Trump Plaza who asked not to be named. “Honestly. I thought, way back when, the guy was way brighter than we were. He was running the company and we were working for him. We thought he was brilliant. When we invested in it, we thought, how could this stock go so low?”

Trump has never had to declare personal bankruptcy, but the company he set up to operate his Atlantic City casinos went through numerous corporate restructurings to reduce its debt load. As the New York Times recounted last year, Trump used his company as a means of transferring his personal debt load onto shareholders, issuing rounds of junk bonds to build up cash that would erase his own debts. “Even as his companies did poorly, Mr. Trump did well,” the Times wrote. “He put up little of his own money, shifted personal debts to the casinos and collected millions of dollars in salary, bonuses and other payments. The burden of his failures fell on investors and others who had bet on his business acumen.”

“I didn’t realize he was as stupid as he is,” says a former casino worker at Trump Plaza.

Starting in 1996, workers at Trump’s casinos were allowed to invest their 401(k) savings directly into Trump stock. (It was the only individual stock offered; the other options were mutual funds.) But that same year, THCR sold $1.1 billion in junk bonds to offset some of Trump’s personal debt and buy two more ill-fated casino properties in Atlantic City. As the company floundered in the years leading up to its second bankruptcy in 2004, the stock price plummeted. According to the class-action complaint, “Between 1996 and August, 2004, employees were encouraged to invest in THCR shares as the price fell from $30/share to $2/share.”

But Trump’s casinos were in near-fatal trouble. On August 10, 2004, the New York Stock Exchange removed the company from its listings as THCR announced a plan to restructure the company’s debt and enter bankruptcy. Shares had been valued at $1.85 the previous day, but tanked to $0.36 in over-the-counter trades after the de-listing.

The committee that managed the Trump employee retirement accounts—with which Trump had no personal involvement—made the decision at that time to prevent workers from buying additional shares in the company because it had become an overly risky investment. “This prevented Plan participants from using an ‘averaging down’ strategy of buying additional shares at the current much lower price, to recoup some of their losses,” the class-action complaint alleged. Employees could still sell shares, but with the $0.10-per-share transaction fee the company charged whenever an employee liquidated stock from his or her retirement account, there was little incentive to do so.

The company’s initial bankruptcy plan fell through a month later, but in late October 2004 a new restructuring plan was approved. With the company soon slated to enter bankruptcy, the retirement fund committee voted on October 25 that any remaining shares of THCR held in the retirement accounts would be sold in bulk by Merrill Lynch on November 15 and sent a letter to workers at the casinos on October 28 informing them of the plan.

As the class-action lawsuit noted, that announcement didn’t help the share price. “Announcing a planned sale of a huge block of stock in a letter to thousands of employees meant that market participants would learn of the forced sale, and adjust their trading strategies to take advantage of the anticipated increase in supply of THCR shares,” the complaint stated. “This would have the unfortunate effect of depressing the stock immediately before the sale of Plan stock.” Employees rushed to dump their stock before the forced sale, with 117,966 shares from the retirement plan unloaded in the two weeks between the announcement and the date of the forced sale.

More than 400 employees still held Trump stock when the forced sale arrived. The stock had been trading at $0.80 on the day of the announcement but had dropped by more than a quarter, to an average of $0.57, when the employees were forced to sell their 924,698 shares the next month. For an employee who’d put $1,000 into her retirement account in 1997 when shares averaged $9.65 apiece, those savings had now withered to just $59.

Five longtime Trump employees—four from the Trump Plaza and one from Trump Marina—filed the lawsuit against the company the next year. They each held between 8,300 and 21,110 shares at the time the forced sale was announced. The lawsuit alleged that the committee in charge of the retirement plan had breached its fiduciary duty by mandating the complete liquidation of employee-held stock when its value was at a low, resulting in more than $2.3 million in losses for employees.

In the end, a federal judge in New Jersey dismissed the class-action lawsuit. “At its core,” the judge wrote, “Plaintiffs’ assertion that Defendants breached their fiduciary duties amounts to nothing more than a claim based on perfect hindsight.” The Trump executives on the retirement fund committee couldn’t necessarily know that the restructuring would boost share prices, the judge found, given the “tenuous” position of the company at the time. Still, the ruling didn’t dispute the extent of the losses suffered by employees.

Trump himself fared well through the bankruptcy. He kept a $2 million annual salary after the company emerged from bankruptcy and took in more than $44 million in compensation over the course of the 14 years he served as chairman of THCR.