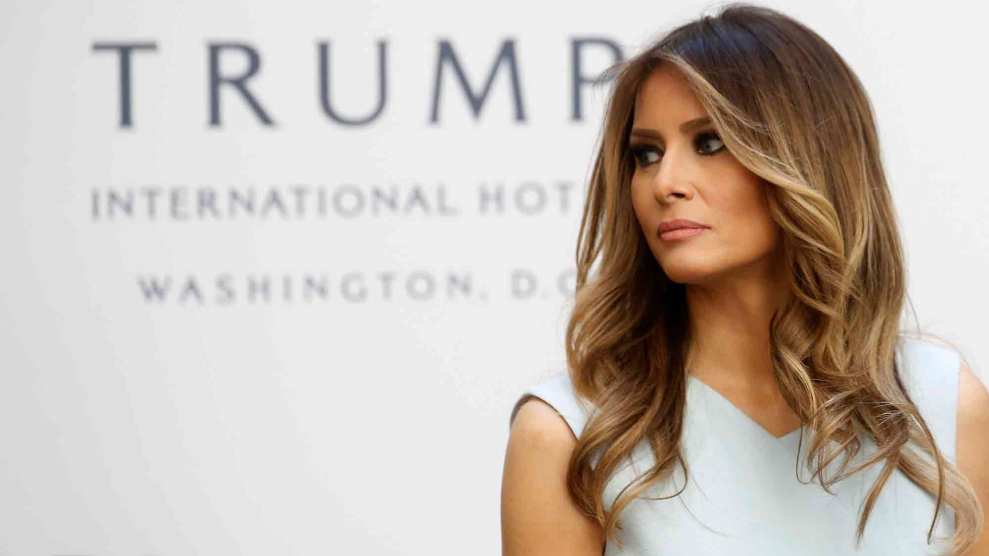 In a career marked by many high-profile failures, one of Donald Trump’s undisputed feats of business genius was The Celebrity Apprentice, which was not only a hit network TV show but also a lucrative infomercial. Companies paid more than $1 million to be featured in episodes in which Celebrity Apprentice contestants teamed up to design marketing or advertising campaigns for their products. And even when Trump’s wife, Melania, appeared on the show in 2013 to promote her new line of caviar-based skin care products, she didn’t get a freebie.

In 2011, New Sunshine, the maker of the Australian Gold tanning products, recruited Melania to launch an eponymous skin care brand.  Jersey Shore‘s JWoww and the Kardashian sisters already promoted the company’s tanning lotions, but thanks to the recession and a slew of bad press concerning the health risks of tanning, the Indiana-based company was looking to diversify by entering the upscale beauty products market. It needed another famous face for the new line.

New Sunshine had initially considered Katie Stam, Miss America 2009, as the face of its skin care line, but consultants concluded she was too young to sell anti-aging products. Instead, the company tapped Melania. She and her husband had long been friendly with the company’s owners, Steve and Tomisue Hilbert. In addition to her striking looks, Melania brought an additional benefit to the deal: an in with Donald and his top-rated show.

The company offered Melania an attractive deal to develop her skin care line and to license her name and image. It committed to spending $2 million creating her products, paid her $1 million upfront, and gave her other perks, including first-class travel and a $10,000 per day hair and makeup budget for photo shoots. Melania’s Caviar Complexe C6 skin care collection launched in April 2013 with a splashy debut on The Celebrity Apprentice. Yet even though Melania was married to the show’s star and co-producer, New Sunshine still had to pay up—though at a discounted rate of $100,000—to hawk Melania’s skin care products on his show.

The episode is unmemorable save for a few creepy scenes featuring actor Gary Busey ogling Melania and rhapsodizing about her looks. “Her beauty lives 5,000 miles past heaven,” Busey says in the episode. “Have you ever had your genitalia so excited that it spins like a Ferris wheel in a carnival ride? That’s how beautiful she is. Hee hee.”

In March 2013, a Wisconsin court approved Hilbert’s removal and Merchant Capital forced him out of New Sunshine. That same month, just as Melania’s new products were about to ship to Lord & Taylor for their debut, Merchant Capital notified her it was canceling her skin care contract. In legal filings, it said the deal was so unfavorable to New Sunshine that it constituted “corporate waste.” In response, Melania demanded that the issue go to arbitration in New York, as provided for in her contract. She demanded $50 million in compensation for her losses and accused Merchant Capital of inappropriately interfering with her business. Merchant Capital then sued her in Indiana, arguing that the arbitration clause was unenforceable and asking the judge to void the contract.

The issue went to trial before an Indiana federal judge in November 2013. In that trial, an expert witness testified that Melania didn’t even qualify as a B-list celebrity who would command such generous licensing terms and dissed her then-paltry 23,000 Twitter followers. (Kim Kardashian, he noted at the time, had more than 18 million.) “The American public doesn’t have any interest in her,” he said.

According to testimony from ex-New Sunshine employees, including Hilbert, one of the reasons New Sunshine recruited Melania was the fact that she could get a discount to appear on The Celebrity Apprentice. “Well, let’s put this in context,” Hilbert said, defending Melania’s contract. “This was to get a slot, really, at no cost for Melania on The Apprentice.”

Hilbert may have overestimated the value of Trump’s show. During the trial, a financial analyst was asked about the sales of Melania’s products, which at the time had been in Lord & Taylor stores for about seven months. “They are very poor,” he said. “I believe last week we sold three units.” Melania eventually settled her case with New Sunshine and Merchant Capital confidentially. She never revived her skin care line.