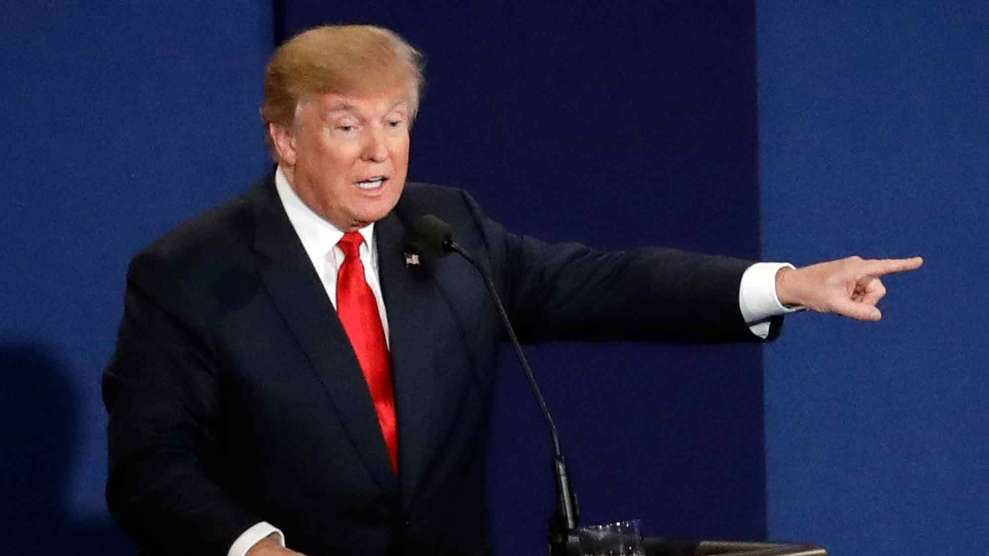 Donald Trump no longer seems to be trying to become the elected commander in chief of the United States. Instead, he appears bent on becoming the leader of a zombie army that can destroy the Republican Party—and perhaps undermine American democracy.

His recent moves—declaring the election “rigged” and claiming he and his supporters are being betrayed by an evil conspiracy mounted by international bankers, the criminal Clintons, and the media—are certainly not designed to win over the voters he needs to triumph on Election Day. If there is any method to his acting out—and who knows how much of Trump’s decisions are rationally derived in this end stage—these are actions aimed at what will happen the morning after, when Trump may well declare the election results fraudulent and whip up his followers for a vengeful rebellion based on an ugly narrative: Trump was robbed, the American people were betrayed by elites, Hillary Clinton’s presidency will be illegitimate (and she ought to be impeached), the federal government will not be lawful, and the Republican Party Establishment is a barrel full of quislings. Trump will have his troops—the undead Republican voters who buy his guff—and he will order them to ride against House Speaker Paul Ryan and all the other GOP turncoats. Or he will start his own television network and invite this sizable audience of angry viewers—who will be wallowing in bitterness, paranoia, and conspiracy theories—to provide him with a robust base for profits. Maybe he will do both.

Trump will not go quietly into the penthouse. A narcissist never retreats. Nor does he ever blame himself. A reality television star who lived and breathed ratings for years, Trump can read polls, and he knows where this show is heading. And Trump needs a story-line both to explain how the biggest winner of all time could lose (to a low-stamina woman!) and to transform this defeat into victory. He has always been deft at squirming out of setbacks and losses with money in his pocket and his ego and brand intact. (See all those Atlantic City bankruptcies.) But his brand, in conventional commercial terms, may not survive this campaign. With his bigotry, bullying, and misogyny, Trump has limited the universe of consumers who might want to spend money at a Trump hotel, golf at a Trump course, or purchase anything with the Trump name attached. And another network television show is improbable. But Trump still has an audience to exploit. And it is unlikely he will let that opportunity pass.

So to the degree that he plans anything, Trump may well be working on the transition, the turn-around. He must hang on to the audience he has left. And this political audience of his needs its red meat. Trump is adept at feeding the frenzy. After inviting to the second debate women who had accused Bill Clinton of sexual misconduct, Trump, for the final debate, brought along President Barack Obama’s half-brother, Malik Obama, as some sort of provocation. (Malik was an odd date for Trump. He is a Trump fan, but he is also a supporter of Hamas, which has called for the eradication of Israel, and he has been the target of right-wing writers who claim he is somehow connected to the Muslim Brotherhood. Still, Trump campaign manager Kellyanne Conway happily posed for a photo with Malik.) Trump also invited the step-mother of one of the four Americans who were killed in Benghazi. He welcomed Sarah Palin to the event, and his allies engineered a pre-debate press conference with Danney Williams, an African American man who claims to be Bill Clinton’s son. (A 1999 DNA test found no link between Clinton and Williams.) Such stunts make for good right-wing tweets and alt-right Reddit posts and demonstrate to Trump’s Obama-and-Clinton-detesting base that he still has the fighting spirit of a good ol’ birther. (They don’t do much to persuade the suburban mom in Columbus, Ohio, to vote for the guy who bragged about grabbing pussy.)

Asked if such distractions are a sign that Trump is no longer focused on attracting voters beyond his die-hard base, retired General Michael Flynn, a chief Trump adviser, exclaimed before the debate, “What’s he doing is waking up this country to the fact we have an enormous amount of corruption inside Washington.” (Flynn also insisted that the recent polls do not indicate Trump is losing.) Brian Fallon, a spokesman for the Clinton campaign, noted that Clinton’s top strategists were puzzled by the Trump strategy. “It’s a page out of the Breitbart playbook,” he said. “I don’t understand [bringing] the president’s half-brother…What is the intention of that? Other than giving lift to a Breitbart narrative…the same narrative that fed the birther conspiracy.” He pointed out that Trump was highlighting “accusations and conspiracy theories that I don’t think the average voter is even conversant with.”

The debate itself was more conventional than the previous face-offs. Fox News’ Chris Wallace, the moderator, guided the two candidates down various policy lanes where they clashed in predictable D-versus-R fashion: gun safety, abortion, taxes, immigration. Trump and Clinton stuck to familiar attacks: she noted he was erratic and a Putin puppet who could not be trusted with nuclear weapons; he called her corrupt and a loser. For a good stretch, Trump stayed with his best material, expressing trade skepticism and assailing a stagnant economy. Clinton forcefully discussed the accusations that Trump had committed sexual assault. “Donald thinks belittling women makes him bigger,” she said. He insisted that his accusers were lying and put up by the Clinton campaign. (Of course, he offered no evidence of this.)

Trump did hit Clinton with some of the right’s favorite shots: the Clinton Foundation, the emails. But he left out Benghazi and did not repeat his previous attack on her husband’s behavior. He showed far more discipline than in the first two debates. But the flashpoint—the heap of red meat—came when Wallace asked Trump if he would “absolutely” accept the result of the election. Trump replied, “I will look at it at the time.” The reporters in the press room at the debate gasped. Trump complained that the media “is so corrupt.” He insisted that “millions of people are registered to vote…that shouldn’t be registered to vote.” And he called Clinton an illegal candidate: “She’s guilty of a very, very serious crime. She should not be allowed to run. And in that respect, it’s rigged. Because she should never have been allowed to run for the presidency based on what she did with e-mails and so many other things.”

Wallace pressed Trump on this fundamental point: “But sir, there is a tradition in this country, in fact one of the prides of this country, is the peaceful transition of power and that no matter how hard fought a campaign is, that at the end of the campaign, that the loser concedes to the winner…Are you saying that you are not prepared now to commit to that principle?” Trump answered, “What I’m saying now is I will tell you at the time. I will keep you in suspense.” (After the debate, Conway was asked by multiple reporters about Trump’s refusal to accept the final tally. “You heard what he said,” she replied.)

This was the headline of the night. No major party candidate in modern times has ever said he would not abide by an election. Clinton responded, “This is horrifying…He is denigrating and talking down our democracy.” Of all the for-the-base crazy he could have brought to the debate stage—Danney Williams, Malik Obama, international bankers—this was the most profound. It was a clear signal for his people: I will not bend before this cabal of schemers who seek to betray us.

With these few sentences, Trump was setting up a post-election litmus test for the Republican Party: do you believe the election was stolen from Trump and everything possible must be done to bring crooked Hillary to heel, or do you not? Trump is betting that millions of GOP voters will shout yes—and will stay politically engaged or, at least, watch television that reflects their outrage. Where will Ryan and the rest be?

Two days before the debate in Washington, DC, I ran into a former Republican congressman and a top party strategist. They assumed that Trump will be crushed by Clinton in three weeks. Neither seemed too disappointed. But both were bracing for the coming civil war within the party. “The real problem for us is what happens afterward,” one said. In past elections, party leaders tended not to worry about a defeated nominee. The expectation usually was that he would return to his old job or fade away. This year, Trump engaged in a hostile takeover of the GOP in order to attempt a hostile takeover of the US government. That ultimate takeover may fail. But the hostility will remain. The real problem for the Republicans (and perhaps the rest of the nation), though, is not Trump. It is the tens of millions of Republican voters who will cast a ballot for him. Will they join him for a post-election Trumpocalypse? At the final debate, Trump was recruiting.