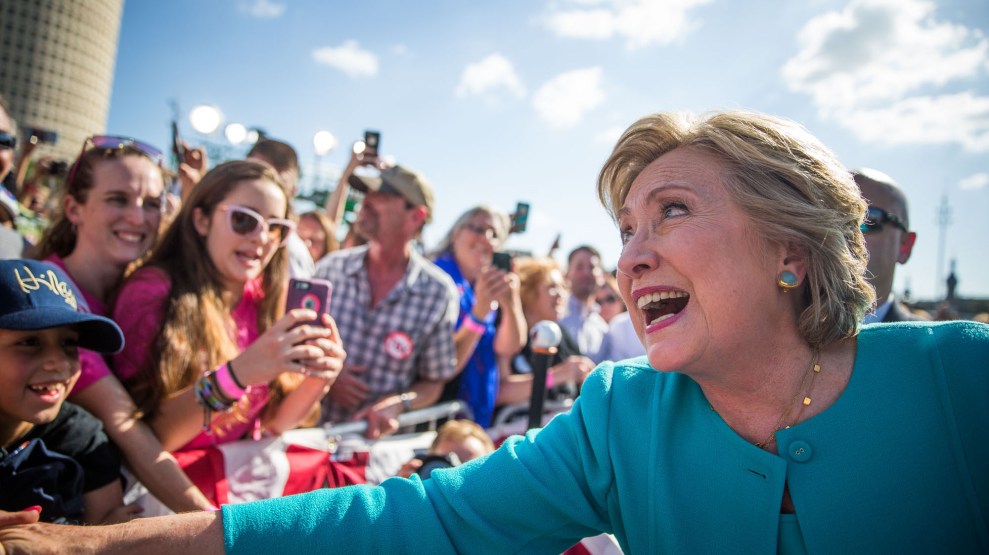 The FBI has come across emails that may be related to the closed Hillary Clinton email server investigation, according to a letter FBI Director James Comey sent several congressional leaders on Friday. The emails appear to have come from devices belonging to disgraced former congressman Anthony Weiner and his wife, Huma Abedin, a longtime Clinton aide.

“In connection with an unrelated case, the FBI has learned of the existence of emails that appear to be pertinent to the investigation,” Comey wrote. “I am writing to inform you that the investigative team briefed me on this yesterday, and I agreed that the FBI should take appropriate investigative steps designed to allow investigators to review these emails to determine whether they contain classified information, as well as to assess their importance to our investigation.” He added, “the FBI cannot yet assess whether or not this material may be significant, and I cannot predict how long it will take us to complete this additional work.”

Immediately on Twitter, Clinton foes started crowing. So did Donald Trump at a rally in Manchester, New Hampshire, minutes after the news broke. “They are reopening the case into her criminal and illegal conduct that threatens the security of the United States of America,” Trump said, as the crowd chanted, “Lock her up!” Trump continued, “Hillary Clinton’s corruption is on a scale we have never seen before. We must not let her take her criminal scheme into the Oval Office. I have great respect for the fact that the FBI and the Department of Justice are now willing to have the courage to right the horrible mistake that they made.”

Trump added that the FBI’s decision not to recommend charges “was a grave miscarriage of justice that the American people fully understood” and that now “perhaps finally justice will be done.”

A little more than an hour after news of the FBI letter broke, the New York Times reported that the new information came to light after the FBI seized devices belonging to Abedin and Weiner.

Upon completing this investigation more than three months ago, FBI Director Comey declared no reasonable prosecutor would move forward with a case like this and added that it was not even a close call. In the months since, Donald Trump and his Republican allies have been baselessly second-guessing the FBI and, in both public and private, browbeating the career officials there to revisit their conclusion in a desperate attempt to harm Hillary Clinton’s presidential campaign.

FBI Director Comey should immediately provide the American public more information than is contained in the letter he sent to eight Republican committee chairmen. Already, we have seen characterizations that the FBI is ‘reopening’ an investigation but Comey’s words do not match that characterization. Director Comey’s letter refers to emails that have come to light in an unrelated case, but we have no idea what those emails are and the Director himself notes they may not even be significant.

It is extraordinary that we would see something like this just 11 days out from a presidential election.

The Director owes it to the American people to immediately provide the full details of what he is now examining. We are confident this will not produce any conclusions different from the one the FBI reached in July.”

This story has been updated with information from the New York Times report and Podesta’s statement.