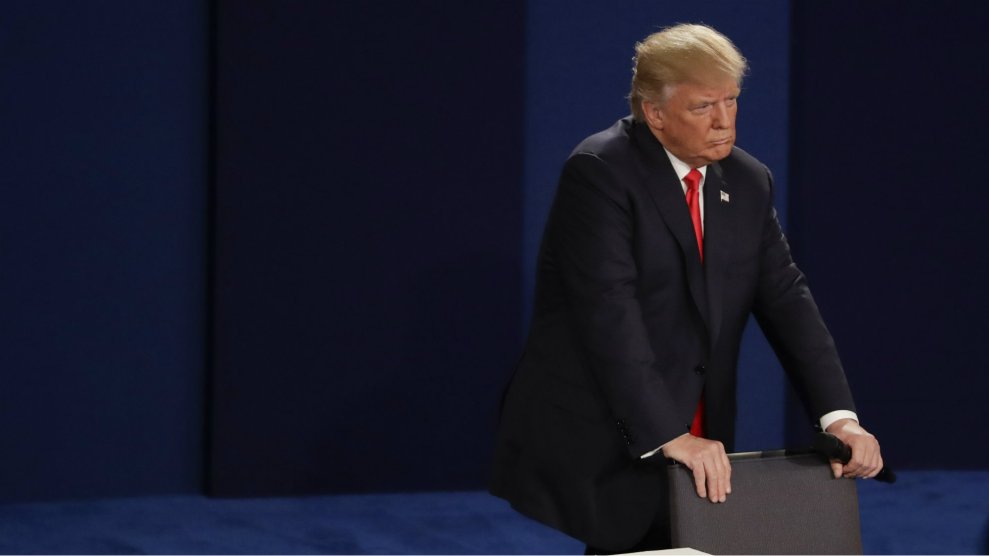 It was appropriate—big league!—that the second presidential debate essentially began with the video that captured Donald Trump, the GOP nominee, bragging about committing sexual assault. Not just because this was the yuge story of the week. Finally, the 2016 So You Want to Be President reality show has zeroed in on the paramount issue of this election cycle: Trump’s soul.

Most election years, candidates and pundits nobly assert that policy issues are the important stuff. Taxes, the economy, national security, health care, climate change, education, social welfare programs, reproductive rights, immigration, trade—that’s what the contenders are supposed to debate, at least when they face off directly. And, certainly, presidential contests are also driven (perhaps largely) by questions related to the personality and experience of the candidates. And much of this did come up during Sunday night’s debate. Trump and Hillary Clinton sparred over Syria, Obamacare, taxes, and energy policy, and they tussled over whose past best prepares them to be president. But one matter loomed larger than all of that: What’s inside Trump?

Throughout the 100-minute-long face-off, Trump did not change his style. He was combative, angry, and mean, as he stalked about the stage during the town-hall-style event. He said that were he to win the White House, he would prosecute Clinton and toss her in jail. This was throwing a blood-dripping bone to his “lock her up” base. Were this anything like a normal election, this Trump vow—which undermines democratic rule—would be the screaming headline out of the debate. This year, it’s just another thing Trump said. He also declared of Clinton, “She has tremendous hate in her heart.” As if threatening to imprison your political opponent is not a thuggish act of demagoguery and hatred.

As for the video, Trump repeated his weak spin that it was just “locker room talk.” (So was he lying to Billy Bush about having actually groped and kissed women without their consent?) There was no contrition. And Trump quickly pivoted to assail Bill Clinton, noting that the Trump campaign had invited to the debate several women who had accused the former president of sexual assault or harassment. Yes, the fellow who claimed that it was time to put the video to the side and move on was arguing that an important matter these days is Bill Clinton’s behavior two and three decades ago. Kellyanne Conway and David Bossie, two top Trump campaign aides, are veterans of the right-wing get-Clinton cabal of the 1990s. But they may have forgotten that the Clintons did manage to win the Clinton wars. Ultimately, this creepy move was born of frustration. Much of the Republican Party had finally dumped Trump, and, as one former Trump adviser told me, Trump and his inner circle believed he had only one play: go nuclear. It was a crude step, debasing this campaign further, but one in sync with Trump’s pettiness and malice.

It was Trump who couldn’t control himself, who lashed out, who said he would start a war if Iranian sailors gave US naval vessels the finger. It was Trump who showed ignorance on critical topics. He was unfamiliar with the nuclear triad, and he didn’t realize that Russia had seized territory in Ukraine. It was Trump who insulted and bullied his way to this point and who set a record for flip-flops and pants-on-fire lies. It was Trump who was caught—practically inevitably—boasting about his freedom to grab a woman’s “pussy” without her consent. It was Trump who made this election all about Trump.

The policy differences between Trump and Clinton—and there are many—are far less important than the differences between them as human beings. Trump famously does not listen to advisers. But at this debate, he did seem more focused and attached to a scorched-earth playbook obviously devised by his team: attack Bill Clinton, attack the moderators, and threaten to put Hillary Clinton in prison. (This was a strategy to rally his base, not to appeal to anyone else, let alone the establishment Republicans abandoning him or suburban women voters.) Trump tends to show little interest in the nitty-gritty of policy. He prefers to hurl ego-fueled memes and slogans: we will win, I will negotiate better deals, I’ll bring back jobs, I know more than the generals, etc. He can barely make it though a paragraph when discussing policy issues without detouring toward irrelevant tangents. At the debate, his description of his health care plan was little more than word salad in a blender. (He did finally confirm that he had used a declared loss of $916 million to duck paying federal income taxes for years.)

Trump has attempted to shape this contest not as a clash of ideologies and policy approaches but as fundamentally a battle between a strong and successful man and a woman with no stamina who does not have a “presidential look.” Yet his erratic and offensive behavior has placed his temperament in the spotlight. He is the No. 1 issue—for both his supporters and his foes. On Sunday, as GOP officials were still fleeing Trump’s camp, the Birmingham News, the largest paper in Republican Alabama, posted a scathing editorial endorsing Clinton that summed up the Trump question: “2016 isn’t a normal election cycle, and Donald Trump isn’t a normal presidential candidate. Nor is he a normal Republican. He is a man who is frighteningly unfit to be president. And she is his only roadblock.” This is the point that Clinton kept pressing: Trump is a hater who cannot be trusted with power.

At this stage, there is little need for a debate on anything but Trump’s ability to function as a sane, rational, deliberate, and decent person. The video showed that his misogyny runs deep—after this race had already produced much evidence casting Trump as a lewd, crude, and cruel man. During the debate, he did little to challenge this impression. He really is that asshole on the bus. Yet Trump defied some predictions and did not implode. That may be the good news for Democrats and bad news for Republicans. A deeply wounded Trump remains in the race, and he will continue to pose a dilemma for the GOP. Millions of the party’s voters will cheer his performance on Sunday night, stick with him, and be enraged at GOP elites for betraying their champion. This could lead to a civil war within the party. What will party leaders do now that it is clear the dark soul of Donald Trump reflects the desires and fears of their own people?