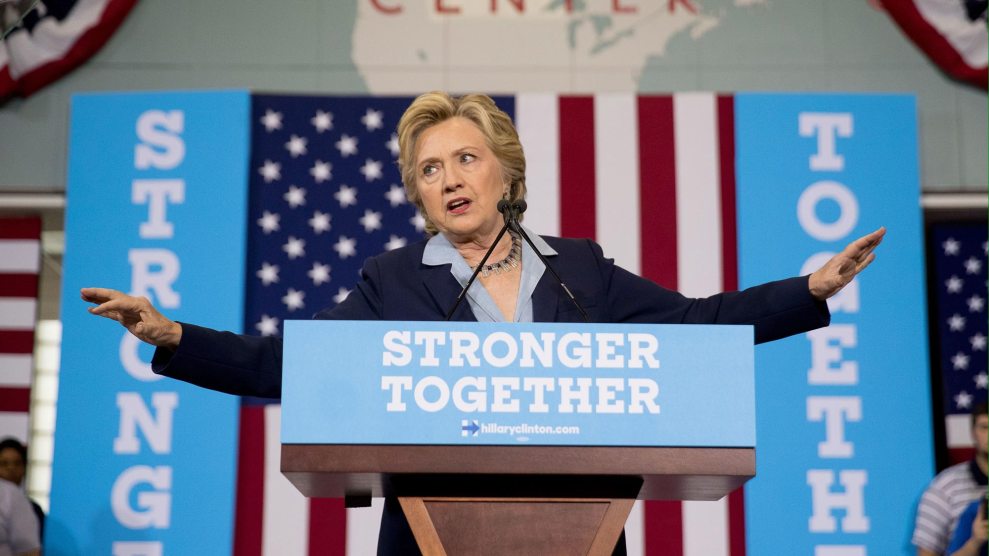 During a campaign stop in Toledo, Ohio, on Monday, Hillary Clinton promised to hold Wells Fargo accountable for a fake-account scandal that has already led to a $190 million fine for the bank, a Department of Justice investigation, lawsuits by former employees and shareholders, and a pummeling of the Wells Fargo CEO by senators during a September hearing.

“Look at Wells Fargo,” Clinton said at the Martin Luther King Jr. plaza, to a crowd of about 1,200. “One of the nation’s biggest banks bullying thousands of employees into committing fraud against unsuspecting customers…It is outrageous that eight years after a cowboy culture on Wall Street wrecked our economy, we are still seeing powerful bankers playing fast and loose with the law.”

Last month, reports revealed that Wells Fargo branches had used real customers’ personal information without their knowledge to open more than 2 million fake deposit and credit card accounts since 2011, as a way of keeping up with the bank’s unrealistic sales quotas. Employees created fake PIN numbers and email addresses to enroll unsuspecting customers and moved money from their existing accounts into the unauthorized ones. Many customers then got hit with overdraft fees or fines tied to the unauthorized accounts. Wells Fargo admitted it knew about the practice and since 2011 had fired more than 5,300 employees who had been involved.

“No American should ever be taken advantage of like thousands were by Wells Fargo,” Clinton said, calling the bank’s actions a “scam” and “egregious corporate behavior.” In speaking about her plans to hold Wells Fargo accountable, Clinton cited her record of calling out other financial institutions. As a senator from New York, she highlighted the early warning signs of the subprime mortgage crisis and introduced legislation to combat identify theft. Clinton concluded, “As president, I will make consumer protection a top priority across the entire government.”

Inspired by the Wells Fargo case, Clinton also promised that her administration would address the issue of forced arbitration. Wells Fargo’s customer contracts include arbitration clauses, which require customers to settle disputes in expensive private arbitration sessions and make class-action lawsuits virtually impossible. This contract provision has undermined the ability of customers affected by Wells Fargo’s actions to sue the bank in open court. Before Clinton’s speech, her campaign released a plan to fight arbitration clauses by asking Congress to give agencies such as the Federal Trade Commission and the Department of Labor the power to restrict their use in certain kinds of contracts.

“We are not going to let corporations like Wells Fargo use these fine-print gotchas to escape accountability,” Clinton said.