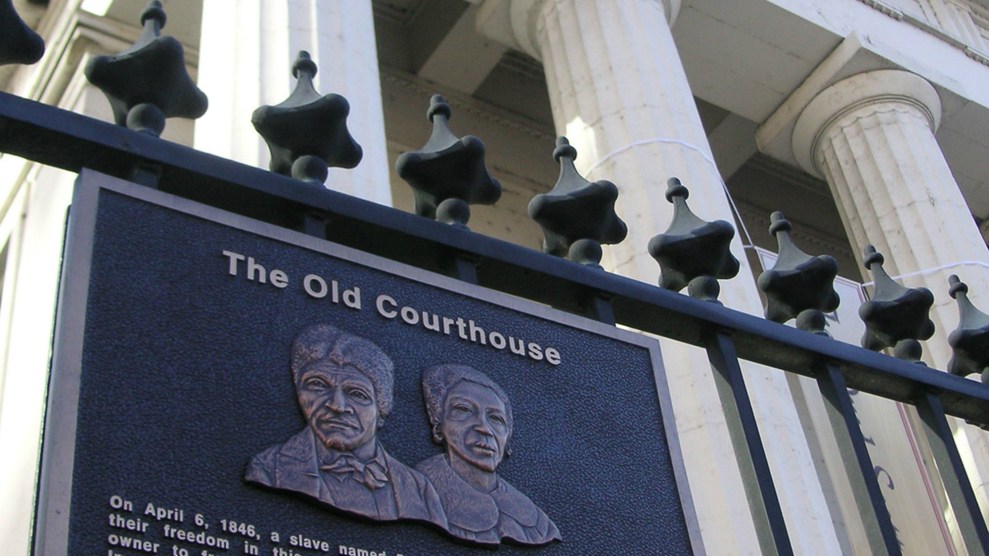 When Kansas Solicitor General Stephen McAllister approvingly cited Dred Scott v. Sandford, a Supreme Court ruling that denied citizenship to black Americans, in his legal defense of the state’s severe anti-abortion law earlier this week, he probably wasn’t prepared for any backlash. But in the past 24 hours, the odd legal argument has been the source of controversy, giving a state that already enjoys a reputation for its governor’s failed tax policies another unfortunate moment in the spotlight.

McAllister’s argument was first spotted on Tuesday and quickly made the rounds online, with journalists and legal scholars alike pointing out the obvious: citing a pro-slavery ruling as positive precedent probably isn’t the best move.

The controversial citation added an unexpected wrinkle to Kansas’ attempt to defend an anti-abortion law that has been rejected by the courts numerous times. In 2015, the Kansas state Legislature passed SB 95, the Unborn Child Protection From Dismemberment Abortion Act, which outlawed one of the most common second-trimester abortion procedures. The law was blocked by a state court days before it was set to take effect, and the state’s appeal seeking to end the injunction was denied earlier this year by the Kansas Court of Appeals, which ruled that the state constitution protected women’s right to an abortion.

A quick constitutional primer: The 14th Amendment of the Constitution, which was passed in 1868 and notably invoked the Declaration of Independence, proclaims, “No state shall make or enforce any law which shall abridge the privileges or immunities of citizens of the United States; nor shall any state deprive any person of life, liberty, or property, without due process of law; nor deny to any person within its jurisdiction the equal protection of the laws.” Over 100 years later, the Supreme Court’s decision in Roe v. Wade found that the 14th Amendment also protected a woman’s right to an abortion.

Language from the Declaration of Independence also appears in the Bill of Rights of the Kansas constitution, which notes “all men are possessed of equal and inalienable natural rights, among which are life, liberty, and the pursuit of happiness.” In June, the American Civil Liberties Union and the Constitutional Accountability Center filed an amicus brief arguing that because of these similarities, if the 14th Amendment protects a woman’s right to an abortion then the Kansas constitution also protects that same right.

But McAllister offered a different interpretation. In the brief filed this week, he argued that the language of the Declaration of Independence is legally irrelevant, as “[c]ourts across the country have recognized that ‘[t]he Declaration of Independence is a statement of ideals, not law.'” To drive this point home, McAllister cited a number of cases, including the aforementioned Dred Scott, a controversial 1857 Supreme Court decision in which Chief Justice Roger Taney argued, in his infamous majority opinion, that African Americans were not afforded protection under the Constitution. The Declaration of Independence did assert all men were equal under the law, he allowed, but the “general words used in that memorable instrument” did not apply to people “of African descent” because slavery was a common practice when the declaration was introduced.

McAllister probably included Dred Scott in his list of examples not for its justification of slavery, but because it supports his argument that the Declaration of Independence isn’t a legal document and should therefore not be used in a court of law. But there’s just one problem: Dred Scott is widely regarded as one of the Supreme Court’s biggest mistakes. And, in an added ironic twist, the Scott decision was overturned by the 14th Amendment, the very Constitutional protection McAllister is trying to dodge.

In a statement released yesterday, Kansas Attorney General Derek Schmidt shifted into damage control mode, announcing that he was withdrawing the state’s brief. He added that the reference to Dred Scott “does not accurately reflect the State’s position, is not necessary for the State’s legal argument, and should not have been made.”

But even in his concession, Schmidt was quick to note that the brouhaha over the Dred Scott citation had overshadowed the state’s main point with the legal brief, which was limiting abortion access. “The unfortunate use of this citation should not distract from the important question the Kansas Supreme Court faces in this case: Whether the Kansas Constitution establishes a state-level right to abortion,” he added. “The State will continue to argue vigorously that it does not.”

Kansas is expected to file a new brief in the near future.

Correction: An earlier version of this post misstated the first name of the Supreme Court Chief Justice.