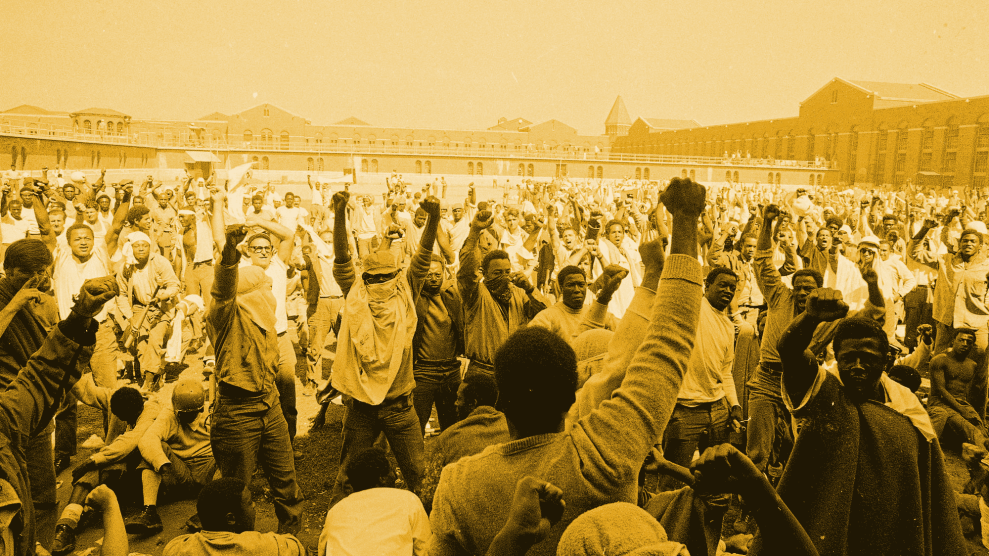 The nationwide prison strike that began September 9 has largely wound down. Inmates have returned to work, though some smaller hunger strikes are still taking place. It’s unclear what long-term changes the strike may bring. Yet the protest, timed to coincide with the 45th anniversary of the Attica prison uprising, has made waves: An estimated 24,000 inmates missed work and as many as 29 prisons were affected, according to activists.

It’s also brought renewed attention to our prison labor system. About 700,000 of America’s 1.5 million prison inmates have jobs, and they work for as little as 12 to 40 cents an hour with few workplace protections. “It’s utterly exploitative,” says Heather Ann Thompson, a professor of Afroamerican and African studies and history at the University of Michigan and the author of the new book Blood in the Water: The Attica Prison Uprising of 1971 and Its Legacy. “Some farms in Nevada are paying 8 cents a day. Some jail workers are paid nothing.” Thompson, who has extensively studied prison labor, says prisoners are expected to work more than they have at any time since the Civil War, when prisons leased out convicts to private companies.

In the late 19th and early 20th centuries, prison labor was largely regulated or prohibited, due in part to efforts by labor unions to prevent competition with low-paid inmates. But beginning in the 1970s, as the prison population began to rise, businesses lobbied to gut these regulations, says Thompson. In 1979, Congress created a program that gives incentives to private companies to use prison labor. Currently, the federal prison industries program produces items ranging from mattresses to prescription eyewear. Some inmates are employed as call center operators (“It’s the best kept secret in outsourcing!” says the program’s website.) Last year, federal inmates helped bring in nearly $472 million in net sales—but only 5 percent of that revenue went to pay inmates.

“Historically, prison labor has been the one thing that tends to really bring prisoners together,” Thompson says. Inmates have protested over their work conditions before. Starting in the late 1940s, hundreds of prisoners across the country organized work stoppages to demand better conditions, including higher wages. Better wages were part of the demands issued during the 1971 Attica prison uprising: Inmates earned between 6 and 29 cents a day and struggled to cover the costs of toilet paper.

I spoke with Thompson about the history of prison labor, Attica, and the recent prison strike.

Mother Jones: Inmates and activists have been calling this strike a protest against a form of modern-day slavery. What do you think of their characterization of prison labor as slavery—is it accurate?

Heather Thompson: It’s absolutely fair to characterize it as slave labor, since constitutionally that is the only exception made for keeping people in a state of slavery. Historically, this issue of labor always has been that thing in American prisons that has generated protest—when prisoners would slit their Achilles tendons so they wouldn’t have to work as slaves, to Attica in 1971, when one of the first protests was a strike in the metal shop there.

“Historically, prison labor has been the one thing that tends to really bring prisoners together.”

MJ: Have prison strikes been effective in the past?

HT: A lot of them have been, and some have been met with extraordinary repression. A number of prison strikes in the 1950s ended brutally with the retaking of those facilities and forcing prisoners back to work. The Attica strike was remarkably effective. They were able to negotiate a higher wage, although it’s still insufficient. They’ve been successful at some points; they’ve generated repression at others.

MJ: Prison labor isn’t in the public eye as much as other issues, such as solitary confinement. How come?

HT: Prisoners are so deliberately shut out of the public consciousness and the public view that it’s very difficult for citizens to even know what’s going on behind bars, let alone be concerned about this as a social justice issue. It is out of sight, out of mind. The other issue is that there’s a lot of debate about whether or not prison labor matters. Does it matter to our economy? I am of the very strong persuasion that it does. It’s hard to calculate, but at the very least, we know there’s a wage-dampening effect on the outside. We know that real jobs go into prisons.

MJ: Do you think that it’s only when something really violent or drastic happens, like it did in Attica, that we start paying attention?

HT: I don’t think so. Attica would have been one of the most important moments in American history even had it ended, as it should have, with a negotiated settlement for reform. Because what made Attica amazing [was that] 1,300 men came together across political, racial lines and barriers of language, and they stood together on these fundamental human rights issues. They held it together for days and days, and they created a tent city where they had medical and food stations, a security force, and there was this moment of self-government. They showed that they were more humane than the state, in terms of the way they treated each other and the hostages.

MJ: What are your thoughts on the recent prison strike?

HT: I definitely feel a sense of discomfort trying to quantify what’s happening, in terms of how many prison workers are not going to work and how many are resisting. But there are stories coming from prisoners themselves. In Michigan, there’s no question that there was a call to strike, and the strike demands were not just about slave labor, but also about working and living conditions—things like spoiled food, being locked up for too many hours a day—just as they were in Attica.

Something that’s very alarming to me, and very similar to Attica, is the repression: The reports coming out of prisons are not only that a whole lot of people are striking, but that the repression they’ve experienced as a result has been severe—the tear gas, the roundups, the cell sweeps. So Attica may inspire these protests, but it’s also true that Attica’s legacy lives on in what the response to these protests has been, which is utter repression.

“The public has a right to know what is going on in these institutions.”

MJ: What do you think of the difference between using terms such as “riot” versus “strike” versus “protest”?

HT: I think using terms like “riot” can be discrediting. It’s a way to connote chaos and aimlessness and danger and destructive behavior with no purpose. “Strike”—I think it’s been an effective term because it causes us to think of exploitation behind walls. I personally like to talk much more about the broader protest and human rights struggle behind bars, because if you look closely at what’s happening, it’s much bigger than people not working. In Florida, in Michigan, in Alabama, this is about the fundamental conditions that people are living under. So in every case, their demands are not just to end prison labor, their demands are to serve decent food, provide medical care, and not cage human beings. “Strike” is both very powerful rhetorically and metaphorically, but it maybe shortchanges what prisoners are demanding on the inside.

MJ: Inmates have told me that Attica did have a bloody legacy, but that they still find inspiration from it.

HT: Right, and here’s what people aren’t really talking about that’s extremely important about these prison strikes: The reason why we know what happened in Attica and the reason that it lives on is that people on the outside—the media, allies, activists—just kept at it. They kept banging on those doors and insisting on access. That, in combination with prisoners refusing to be silenced and continuing to speak up about their experience. It’s [because of] those two things that we know anything about Attica.

The public has a right to know what is going on in these institutions. They are public, they are funded by the people, and we have a right to know what is happening in them. And the more the media keeps pushing, the more we will know. And lawyers need to be showing up and protecting these guys. We need that same effort today, because without it, prisoners are extraordinarily vulnerable to whatever the state chooses to do with them.