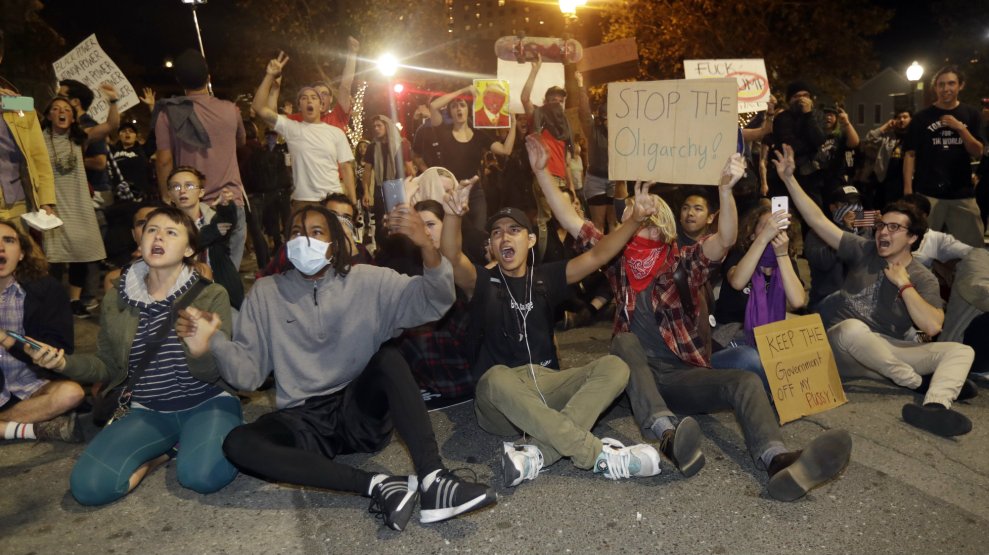 Hours after businessman and reality show star Donald Trump was elected as the Unites States’ next president, protests broke out in major cities around the country.

Thirty people were arrested and three police officers were injured at a protest in Oakland, California, on Wednesday night, NBC reported. Thousands of people took to the streets in the city’s downtown district—at least five fires were set, several store windows were broken, and protesters tagged numerous buildings with anti-Trump graffiti as police used tear gas to disperse crowds.

The protest began as a peaceful rally at Oakland’s City Hall but devolved into chaos as the night dragged on.

There are at least 1,000 people out here protesting Trump’s election. #Oakland pic.twitter.com/BRTCCFMn7W

“[Donald Trump] aligned himself very early on with white supremacists. He spoke out very much so on Mexicans—they’re rapists, they’re murderers. He said that [he] will be the law enforcement candidate, and to me that translated into ‘I’m going to make sure more black people go to prison,” Rabia, 30, told me at the Oakland protest.

She is both black and Muslim. “His statements about women, his behavior around the disabled, some of the statements he made at his rallies when he saw people being roughed up…that is not the behavior of a president.”

Anti-Trump protests were planned in at least 15 cities Wednesday, including New York, Chicago, and Los Angeles. Trump—whose campaign was fueled largely by racist, xenophobic, and sexist rhetoric—stunned Hillary Clinton supporters when he clinched 51 more electoral votes than the former secretary of state on Tuesday night. Clinton, however, won the popular vote. On social media, people used the hashtag #notmypresident to voice their opposition.

Carly McCarthy, 25, told me she is unnerved by Trump’s attitude toward women. “For me, just being in a female body, someone like that even getting close to that kind of power [is scary].”

McCarthy, who is white, said she identifies as queer and gender nonconforming. “There’s no group that he hasn’t said that he hates. And I feel like he’s just kind of lit this fire inside of a lot of people that feel like they need to take their anger out on those groups too,” she added. “I’m scared. And I feel like I need to be here to know that I’m not alone.”

Stephanie Selvin, 27, said she also attended the protest to “feel some sense of community and togetherness in the face of hate.”

Sobeyda Gomez-Chou, a math teacher at a high school in Oakland, attended the protest with three of her students before it got rowdy. She said she decided not to hold regular class on Wednesday and instead allowed her students the space to talk about how they felt about the election.

“I pretty much decided to throw away my plans for the day,” she told me. “Clearly a lot of people were upset, and it is important for all of us to be heard. And so we were able to kind of jot down how we were feeling. We were able to share out loud. And just pretty much talk about what happened last night and just ask questions and have answers for what could potentially happen from now on.”

There might be one upside to Trump’s election, Gomez-Chou said. “[My students are] excited to have their opinions and voice heard in the next election. I think it’s really driven a lot of the young people to make a difference.”