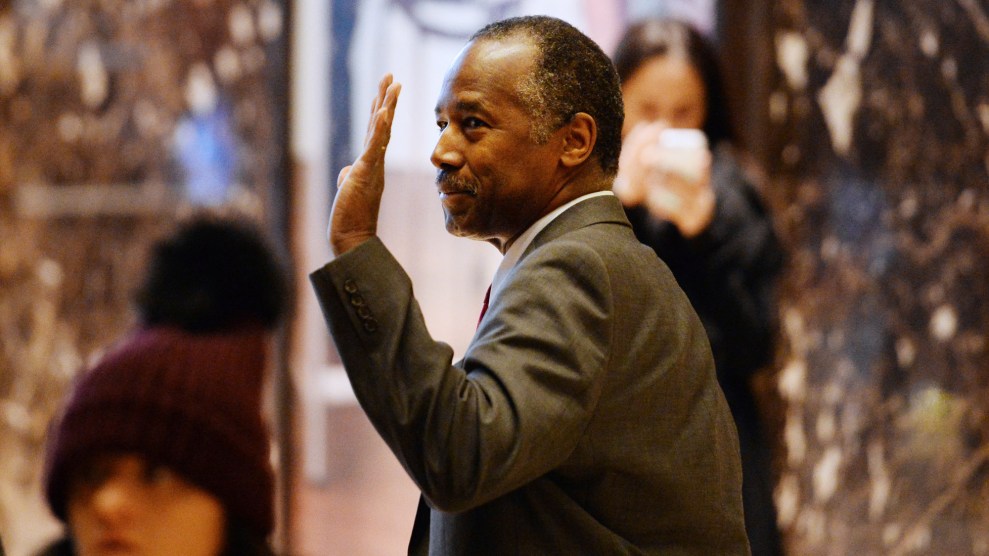 Donald Trump has offered retired neurosurgeon Ben Carson the role of secretary of housing and urban development. That’s surprising for two reasons. Just a week ago, Carson’s close adviser and friend Armstrong Williams told The Hill that the former Republican presidential candidate had told Trump he was not interested in a Cabinet position because he felt “he has no government experience” and “he’s never run a federal agency.”

But perhaps more important, Carson has no obvious qualifications for the role. His career has been in medicine, and he was thought to be a top candidate to head the Department of Health and Human Services or possibly the Department of Education. Instead, Trump surprised nearly everyone on Tuesday by tweeting that he was considering Carson for HUD, and then by offering him that role.

Still, Carson has weighed in on matters of housing and urban development—by criticizing efforts to combat housing segregation.

Last year, while vying for the Republican presidential nomination, Carson took to the Washington Times op-ed page to weigh in on a HUD fair housing rule that required cities receiving federal funds from HUD to examine existing housing patterns and set goals to reduce segregation. Carson likened the endeavor to “the failure of school busing,” arguing that the rule would alter the nature of communities by “encouraging municipalities to strike down housing ordinances that have no overtly (or even intended) discriminatory purpose—including race-neutral zoning restrictions on lot sizes and limits on multi-unit dwellings, all in the name of promoting diversity.” He claimed that busing did not statistically improve integration in the 1970s and that the practice was unpopular among both black and white families. Others have argued that the desegregation efforts during that period narrowed the racial gap in reading scores and that students throughout the South, Midwest, and West saw gains from attending more integrated schools by the late 1980s.

“These government-engineered attempts to legislate racial equality create consequences that often make matters worse,” Carson wrote. “There are reasonable ways to use housing policy to enhance the opportunities available to lower-income citizens, but based on the history of failed socialist experiments in this country, entrusting the government to get it right can prove downright dangerous.”

A month earlier, Carson had made a similar argument against federal intervention to promote housing integration. In June 2015, Iowa radio host Jan Mickelson raised the issue of subsidized housing with Carson, in audio surfaced by BuzzFeed, alleging that “the people of eastern Iowa have to recruit from Chicago their poverty-afflicted individuals, to bring them to Iowa in order for them to qualify for Section 8 housing.” Mickelson alluded to a voluntary compliance agreement between HUD and the city of Dubuque, Iowa, in 2014 that eliminated a housing policy that HUD had found to discriminate against African Americans.

“This is just an example of what happens when we allow the government to infiltrate every part of our lives,” Carson told Mickelson. “This is what you see in communist countries where they have so many regulations encircling every aspect of your life that if you don’t agree with them, all they have to do is pull the noose. And this is what we’ve got now.”

Carson has yet to accept the HUD job, but he wrote on Facebook Wednesday that he “can make a significant contribution particularly to making our inner cities great for everyone” and that “an announcement is forthcoming about my role in helping to make America great again.”