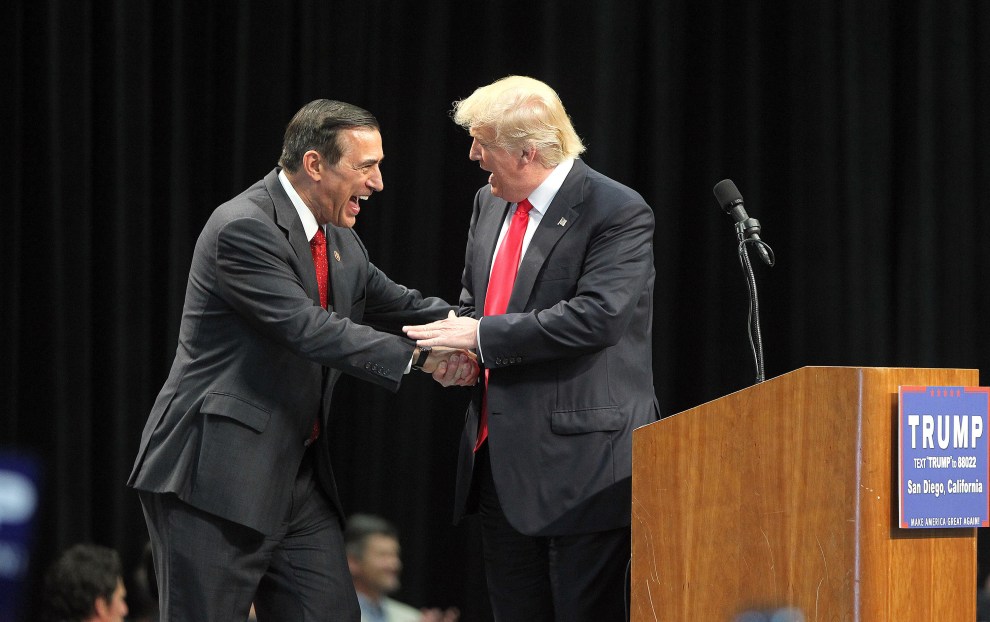 Darrell Issa has been acting strangely. Over the weekend, the eight-term Republican congressman from Southern California’s 49th district embarked on a bike ride across the region, pausing at local businesses for photo ops and chatting with voters. Upon reaching the Camp Pendleton Marine Corps Base, he flashed a smile for the camera and posted to Twitter, “Nothing motivates like @USMC #OORAH.” He’s doing private fundraisers. He’s showing up at community events with the Log Cabin Republicans, a sober-living workshop, the North County Food Bank. Issa has even distributed yard signs.

This is typical behavior for an incumbent facing reelection, but Issa has never had to bother with this kind of ground-level campaigning. “Darrell never participated before. He’s never been involved in our Republican campaigning, because he was so safe,” says Oceanside Councilman Jerry Kern. Kern says he’s seen Issa more in the past few months than in the entire 10 years that he’s run the city’s Republican headquarters.

Since Issa was first elected in 2000, he’s slayed one Democratic opponent after another with virtually no sweat broken. But this is not a typical election year, and Issa—the former chair of the House Oversight Committee who’s dogged the Obama administration with Benghazi, IRS, Fast and Furious, Solyndra, Healthcare.gov, and other theatrical investigations—is no longer safe. In his efforts to extend his 16-year tenure as one of California’s most powerful Republicans, he’s playing a frantic game of catch-up as Election Day nears.

In late 2015, Doug Applegate, a retired Marine colonel and trial lawyer who felt “embarrassed by Darrell Issa,” noted his district’s increasing Latino population and its slow drift leftward, and thought, There’s a possibility here. Even though he was a political novice, he decided to run for Issa’s seat.

Applegate met with Francine Busby, the chair of the San Diego County Democratic Party. She had run for the same seat in 2004, 2006, and 2010 and knew exactly what he’d be up against. “I had ‘the talk’ with him,” she says. “When you run in a district against an incumbent who is the richest man in Congress, who is in two different counties, who has a voter registration advantage and a name ID advantage, it’s gonna be tough.” She shrugs. “But give it a try.”

Like every hopeful who’d sought to unseat Issa, Applegate stood almost no chance. He raised $53,000 in the run-up to the June primary, while Issa already had $3.7 million stashed away for the November election. “In a typical year,” San Diego Union-Tribune columnist Logan Jenkins wrote in June, “this candidate would make Don Quixote look like a realist.”

“When you run in a district against an incumbent who is the richest man in Congress, it’s gonna be tough. But give it a try.”

But on primary night, to everyone’s surprise, Applegate came within striking distance of Issa, trailing him by just 5 points and winning a spot on the November ballot. (In California’s open or “jungle” primary system, the top two vote-getters make the ballot, regardless of party.) Thinking the primary might have been a fluke, the Democratic Congressional Campaign Committee conducted three polls—and found that Applegate’s popularity remained strong. In one poll, he had a 3-point edge over Issa. In Applegate, the House Democrats’ campaign arm had found a progressive candidate with crossover appeal: As a vet who’d deployed to Iraq in 2006, he could tap into the district’s large military and veteran population. The DCCC threw in $2.1 million, launched field-canvassing operations, and made it a real race.

Observers describe the primary outcome as a wake-up call for Issa but question whether his team really got the message. The nonpartisan Cook Political Report moved the race from “leans Republican” to a toss-up in mid-October. “It’s a mystifyingly bad campaign that Issa’s run,” the report’s editor told the Times.

Issa didn’t launch campaign ads until October. One featured former New York City Mayor Rudy Giuliani to rebut an Applegate ad. “The last thing you do is bring in a New Yorker who has no appeal whatsoever and reinforces his association with Trump,” says Busby. “It’s just very amateurish.” As one Republican political operative who asked to remain anonymous told me, “I don’t know if you’ve looked at Darrell Issa’s TV ads, but they are the worst fucking TV ads I’ve ever seen in my life.”

Applegate owes much of his unexpected success to the weirdness of this year’s presidential election—and Issa’s embrace of Donald Trump. In February, Issa warned that Trump could endanger Republicans seeking reelection, even arguing that Trump could be “a national Todd Akin,” referring to the Missouri congressman who claimed in 2012 that “legitimate rape” doesn’t cause pregnancy. But then, in May, after months of campaigning for Florida Sen. Marco Rubio, Issa declared Trump “the obvious choice.” On the same day as Trump’s Access Hollywood tapes hit the news in October, Issa signed on to Trump’s national security advisory board.

While Republicans have an 8-point voter registration advantage in the district, Trump is doing poorly there. An August poll conducted for Applegate’s campaign found that Trump had a 60 percent unfavorable rating there. A recent poll shows Hillary Clinton with a 14-point lead. In an interview with a local Fox station, Issa acknowledged, “The majority of my district will go for Hillary Clinton, but I think they are making a mistake.”

So when Trump tries to boost Issa—as he did yesterday when he tweeted that Issa “is a very good man”—it’s not exactly helpful. Perhaps sensing a need to put some distance between him and Trump, Issa has done an odd dance with his old nemesis, President Barack Obama. Issa has often been referred to as Obama’s “chief antagonist.” He has called Obama “one of the most corrupt presidents in modern times” and has floated the idea of impeachment. Yet in October, he sent out campaign mailers prominently adorned with Obama’s image, applauding the president for signing a bill that Issa had co-sponsored.

Obama pounced on Issa at a high-donor fundraiser in La Jolla the following week. The president called Issa “shameless” and “not somebody who’s serious about working on problems.” Referring to the campaign mailer picturing him, Obama said, “That is the definition of chutzpah.” 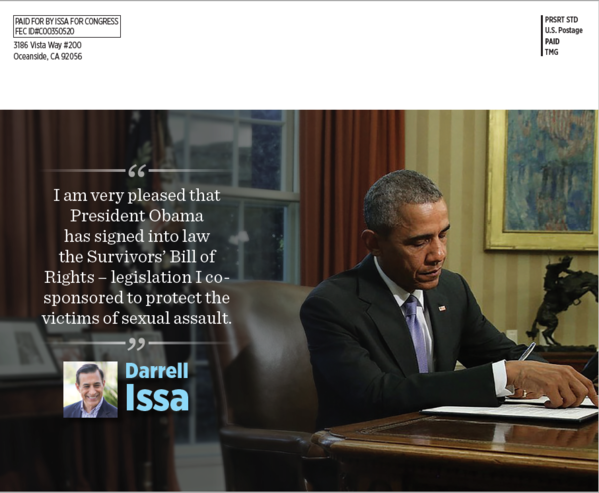 At a campaign rally for veterans in Solana Beach, Applegate tells me that when he first considered running, he thought his military experience might help him win. His campaign has made much of his record: “Colonel” is emblazoned on all its advertisements and press releases. He has a crew cut, buzzed short on the sides, and is wearing a boxy navy-blue blazer and khakis. He speaks in a measured, confident voice, pausing often between thoughts. “The Democrats had never run anybody who spent a lot of time in the Marine Corps,” he says. “I also knew there were a lot of people—Republican veterans—who considered Darrell Issa a no-show, a Casper the Ghost.”

Veterans at the rally echoed this sentiment, remarking that Applegate “knows what it’s like,” while Issa, as one former Marine put it, has been “slow on his feet” to address veterans’ issues. Another called Issa, who is an Army vet, “absent” and said he only has time for photo ops. (The Issa campaign did not respond to multiple requests for an interview.)

But not everyone’s saying Issa is done for. “I think Darrell’s vulnerability has been overstated,” says Jason Roe, a San Diego-based political consultant for Republicans. “When it comes to California Republicans, if you’ve been able to survive the last decade, you’re probably fairly well insulated.”

“I think Darrell’s vulnerability has been overstated. If you’ve been able to survive the last decade, you’re probably fairly well insulated.”

Both of the area’s major papers, the San Diego Union-Tribune and the Orange County Register, have endorsed Issa. And his supporters discount claims that he’s ghosted them. “He’s in the district constantly. I’ve seen him many, many times at various events and functions,” says Susan Jester, a co-founder of the Log Cabin Republicans and the former president of its San Diego chapter. And she finds the concerns about Issa’s ties to Trump unconvincing. “If your only platform is, ‘I’m not Darrell Issa, and he’s a bad guy for hanging out with Trump,’ it’s not enough.” Kern says, “You gotta remember: Darrell outdid Romney in the district. I’m sure he’ll outdo Trump this time.”

And Applegate is not without his blemishes. “The candidate that’s running is incredibly flawed,” says Kurt Bardella, a former Issa adviser (who worked briefly as Breitbart‘s spokesman before quitting over the site becoming “the de facto propaganda machine for Donald Trump.”) In 2002 and 2004, Applegate’s ex-wife was granted two temporary restraining orders against him, and he was forced to surrender two guns in connection with her accusations of “stalking.” (She publicly supports him now.)

Republicans also question the Democrats bringing in Obama to attack Issa. “It changed the narrative from tying Issa to Trump and made it about Issa versus Obama,” says Bardella. “Remember, for the last eight years, it’s been Issa versus Obama. Interjecting the president into the race directly benefits Issa.”

Issa’s future may ultimately depend on turnout. Will Trump-adverse Republicans simply stay home? For California Republicans, Bardella explains, “your vote frankly doesn’t matter at the top of the ticket, and the Senate race is between two Democrats. There’s not as much incentive for Republicans to turn up.” Kern agrees: “If you dig deep down, if you really look at it, why would Republicans show up?”

Even if Trump doesn’t kill Darell Issa’s political career next Tuesday, at least he’s forced the California Republican to show up for the election.