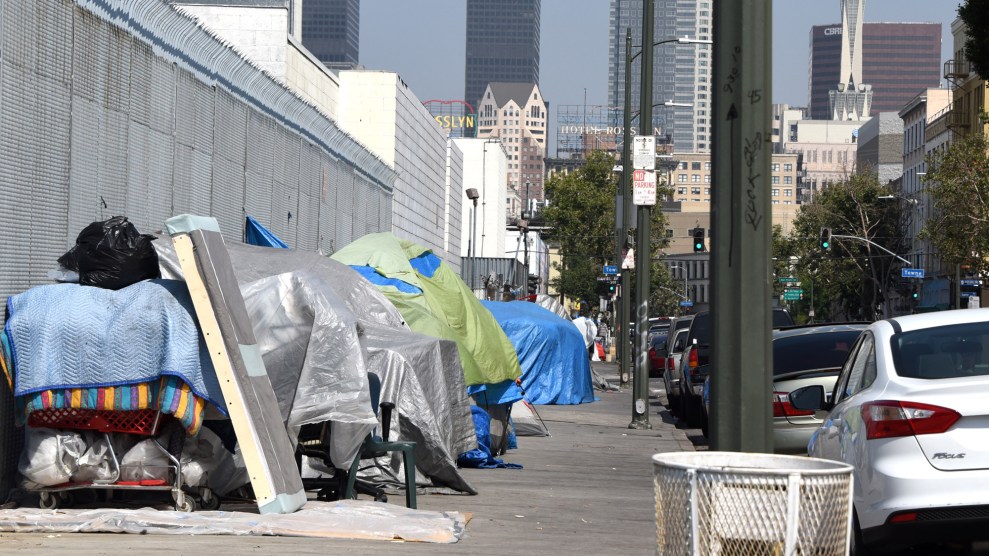 In the last week of January, when cities around the nation took a ballpark tally of their street populations, they counted a total of 549,928 people living in some form of homelessness. And while that’s hardly good news, it represents a 3 percent drop from the previous January. However, 15 states and the District of Columbia saw increases in the number of people lacking permanent shelter.

The new figures, released Thursday by the Department of Housing and Urban Development in its annual report to Congress, mark the seventh consecutive year that homelessness has declined nationally. Sixty-eight percent of the affected people were staying in transitional housing and emergency shelters. The number experiencing chronic homelessness, defined as people with a disability who have been consistently homeless for at least a year, dropped 7 percent from 2015 to 2016—and 35 percent since 2007.

Washington, DC, saw the biggest year-to-year increase in its homeless population—more than 14 percent.

To break the numbers down further, the number of homeless individuals stayed pretty much flat, but the number of people in families who were homeless dropped 6 percent in 2015—to 194,716 in January 2016. There were also 3 percent fewer unaccompanied homeless minors, who numbered 35,686 in the most recent count.

California had the dubious honor of hosting America’s largest homeless population—its count (118,142 people) was up 2 percent from 2015 to 2016. Washington, DC, saw the highest year-to-year increase (more than 14 percent), and was followed closely by Idaho. Of the 15 states that saw increases in homelessness, eight were in the West: Washington state gained more than 7 percent and Colorado 6 percent. Hawaii had a 4 percent increase.

During a press call on Thursday, HUD Secretary Julian Castro told reporters he was proud of the work being done to curb homelessness, but noted that more work was needed. Matthew Doherty, executive director of the US Interagency Council on Homelessness, attributed the increases in homelessness in some regions to housing-market shifts, particularly out West, that have made it harder for people to retain a stable living situation. In cities such as Seattle, Los Angeles, and San Francisco, soaring rents and home prices have been accompanied by blooms of tent encampments. In other regions, the opioid epidemic has put people on the streets.

It’s unclear what HUD will do to address homelessness under a Donald Trump administration. Castro told reporters he hoped the incoming administration would retain, or expand, current programs. He pointed to a 47 percent decline in homelessness among veterans since 2010—that’s when President Barack Obama launched the Opening Doors initiative, an effort to wipe out veteran, chronic, and family homelessness. Since then, the national homeless population has dropped by nearly 14 percent—roughly 87,000 people. “My hope is that the next administration will…not drop the baton,” Castro said. “We owe our veterans more than to stop progress simply because people change seats in Washington.”