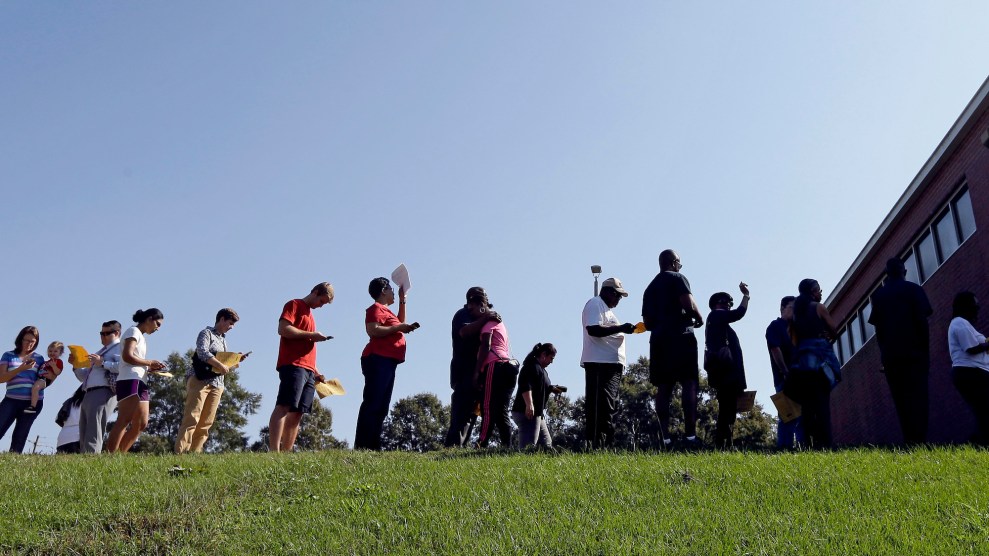 North Carolina has been the epicenter of voter suppression efforts during the 2016 campaign, and the North Carolina Republican Party is now celebrating the stats showing those efforts worked.

The party sent a press release to reporters on Sunday trumpeting the fact that fewer black voters cast early ballots this year than they did in 2012. “African American Early Voting is down 8.5% from this time in 2012,” the release read. “As a share of Early Voters, African Americans are down 6.0%.” The statement also cheered the rise in white voters as compared with 2012. “The once dynamic Obama Coalition [is] crumbling and tired,” said Robin Hayes, the North Carolina GOP chairman, adding that the party’s “motivated statewide volunteers and extensive ground game” are the reason for the good news.

There’s probably another reason: The decline in early voting among black voters is likely a result of yearslong efforts by North Carolina’s Republican officials and political operatives to impose voting restrictions in the state. Emails obtained last week by Reuters showed that Republican officials pushed successfully to restrict early voting sites and cut down on early voting on Sundays, when many black churches hold “Souls to the Polls” mass voting drives. During a major voting rights lawsuit decided in July, the 4th Circuit Courts of Appeals noted that the state eliminated Sunday voting specifically because the voters who used it were “disproportionately” black and Democratic.

While the state had more early voting locations and hours overall, 17 Republican-controlled county election boards slashed the number of early voting sites they set up, which decimated turnout in their areas. According to an October 26 blog post from insightus, a North Carolina public policy nonprofit group, “the average turnout across these 17 super-suppressor counties is just 69% of 2012’s performance. Meanwhile, voting action across the state’s 83 other counties averaged 124% of 2012.”

Michael McDonald, an assistant professor at the University of Florida who runs the early-vote-tracking US Elections Project, noted that North Carolina’s restrictions made it the only Southern state to track voters by race where black early voting actually declined.

The North Carolina Republican Party declined to answer questions from Mother Jones about its press release celebrating the decline in black early voting.

The early voting restrictions were far from the only attempt to limit minority voting in North Carolina. The state passed a strict voter ID law in 2013, causing voter registrations to plummet, before a federal court struck down the law in July on the grounds that it specifically targeted black voters. “We cannot ignore the record evidence that, because of race, the legislature enacted one of the largest restrictions of the franchise in modern North Carolina history,” the 4th Circuit wrote in its decision. GOP operatives also attempted to strike thousands of people from voter rolls through North Carolina before a federal judge barred the moves on Friday, calling the voter removal process “insane.”