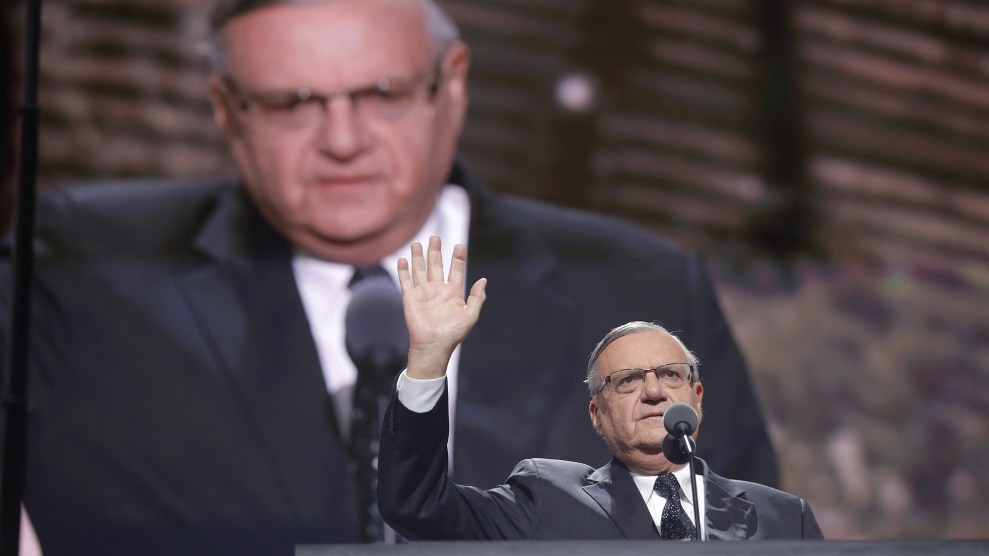 For the first time in 24 years, voters in Maricopa County, Arizona, rejected Joe Arpaio as their sheriff. The embattled 84-year-old immigration hardliner lost to Democratic challenger Paul Penzone, a retired sergeant from the Phoenix Police Department who came up 6 points short when he ran against Arpaio in 2012.

“Everything eventually comes to roost,” Penzone told Mother Jones on election night. “It’s about people being tired of his wasteful practices and his selfish behaviors.”

With 50 percent of the returns in, Penzone led Arpaio by nearly 10 points and the Associated Press called the race for Penzone. The Republican nomination of Donald Trump is thought to have spurred the state’s massive Hispanic population to come out in high numbers and made Arizona competitive for Democrats (including Hillary Clinton) for the first time in a generation. At the same point when the race was called for Penzone, Clinton was trailing the Republican presidential nominee by roughly 5 points.

Penzone said his first priority would be to surround himself with “the most qualified and principled law enforcement leaders within that organization and possibly some coming from outside that organization. Because we need to establish a new culture on efficiency, professionalism and principles.” He said he’d also work to quickly get the agency’s “arms around” cleaning up a legacy of racial profiling and abuse of power left behind by Arpaio. 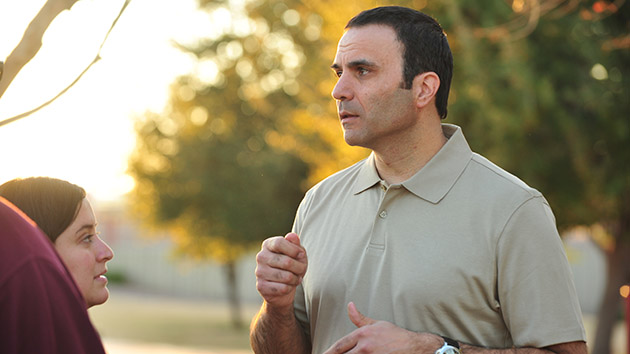 Arpaio, who was known as “America’s toughest sheriff,” spoke at the Republican Convention and was well known for his tough-on-immigrants stance.   On October 25, he was charged with criminal contempt of court for conducting immigration patrols in defiance of a judge’s order. The charges stem from a 2007 racial profiling case, in which the Maricopa County Sheriff’s Office, under Arpaio’s control, targeted minorities for illegal immigration sweeps during traffic stops. In May this year, a federal judge ruled that Arpaio and several senior aides ignored a 2011 order to stop the raids, lied to the court about it, and withheld relevant information from court proceedings. At that time, the judge held Arpaio in civil contempt of court and left the door open for a criminal contempt referral, which came in August. In October, federal prosecutors filed papers to move forward with that charge. Arpaio’s attorney, Mel McDonald, told Mother Jones that the sheriff will plead not guilty.

Arpaio told a crowd of supporters in early November that the charges were politically motivated. “Of course they did that the day before voting started,” Arpaio said, according to the Arizona Republic. “They’re hoping to destroy me so I can’t get elected…I’m kind of a trophy to the White House.”

Arpaio’s loss represents a sea change in Arizona, where anti-immigration sentiment has been a major theme for many years. While Trump’s nomination helped drive some Latino voters to the polls, many civil rights groups have been organizing for years to build the momentum that helped lead to Arpaio’s defeat, says Maria Elena Durazo, the general vice president for immigration, civil rights, and diversity for Unite Here, an international labor union and advocacy group. Unite Here’s “Adiós Arpaio” campaign has organized young voters and teens for years.

“Just repressive anti-immigration or racist ideas or proposals did not change the community,” said Durazo. “You know of so many places across the country where that repression exists and that racism exists, and people just don’t stand up and fight back. They need organization. They need real training to be leaders, and that’s where it makes a difference.”

Rachel Sulkes, an organizer with Unite Here, said the impact of his loss was hard to put into words. “In Arizona, we always say to each other ‘sí se puede’ (‘yes we can’) in all of our meetings, but sometimes when you say it, you’re saying it because you want to feel that way,” she said before all the results were in Tuesday night. “But [Arpaio’s loss proves] that sí se puede.”

Penzone’s victory was helped by $2.3 million from liberal financier George Soros, who has poured millions of dollars into judicial system races across the country during this cycle. Penzone raised about $1 million on his own, compared with Arpaio’s $12.8 million war chest.

“We congratulate Paul Penzone and everyone who contributed to his important victory tonight,” Soros adviser and spokesman Michael Vachon told Mother Jones. “Tonight’s contest demonstrated that when matched on a more even playing field, the values of justice and inclusion will defeat the politics of fearmongering and intolerance. Maricopa County will be a safer, fairer, more just jurisdiction with Paul Penzone as sheriff.”