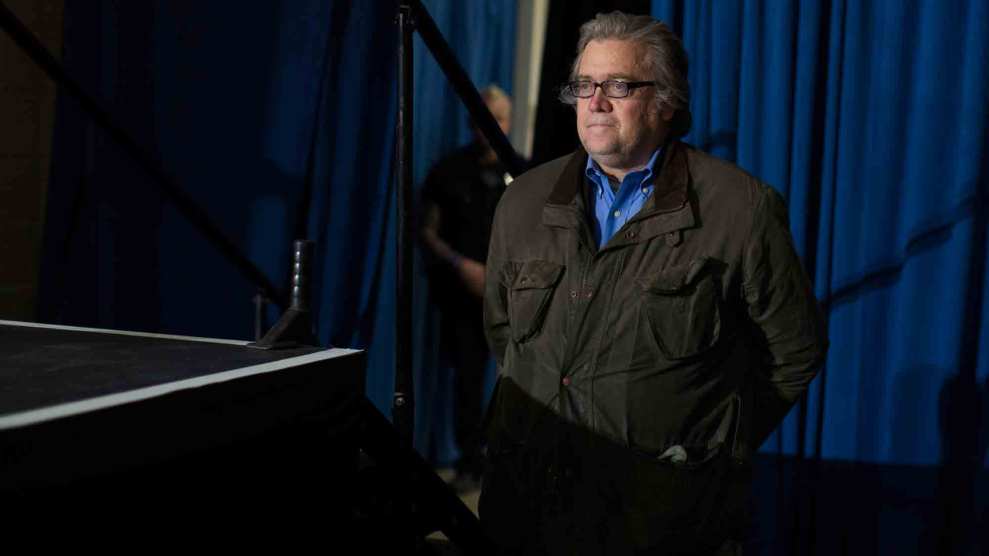 Stephen Bannon, whom Donald Trump tapped as his chief strategist in the White House, has come under fire for his self-admitted promotion of the alt-right, a haven of white nationalists, when he was head of far-right Breitbart News. His defenders have insisted Bannon is no racist or anti-Semite. But Mother Jones has uncovered another clue about Bannon’s political personality: Bannon joined a conservative Facebook group that has featured racist and extreme material. This material includes posts urging a military coup against President Barack Obama, featuring an image of the president dressed as an SS officer, celebrating the Confederate flag, highlighting a photoshopped picture of Obama with watermelons, praising a police officer who called Obama a “F*cking Nigger,” and calling for Obama to be “executed as a traitor.”

This Facebook group is for an outfit called Vigilant Patriots, which claims its goals are defending and upholding the Constitution and preserving “our history and culture.” As of Friday morning, it listed nearly 3,600 members, including Stephen Bannon, who apparently joined the group seven years ago. 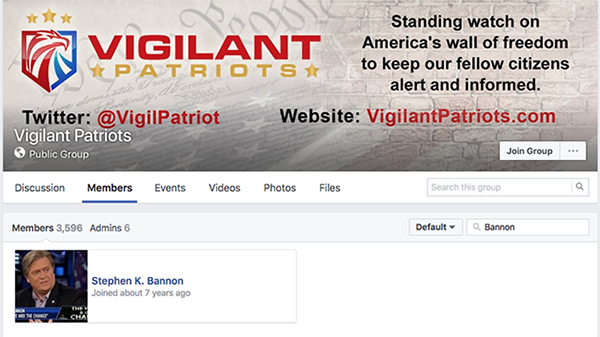 Vigilant Patriots is a collection of right-wing Facebookers, including members who hail militias and decry Muslims, immigration, progressives, sellout Republicans, and the president with hateful, violent, and racist rhetoric. It has an active Twitter feed that is virulently anti-Islam. Its website does not seem to be functioning currently.

Bannon has not engaged in much public activity on Facebook. He is listed as a member of 31 groups, most of them conservative, with several comprising supporters of Sarah Palin. (Bannon once made a gushy documentary about the tea party star.) A search of Facebook turned up only a handful of posts attributed to Bannon, none on the Vigilant Patriots page.

This Bannon Facebook page joined a group that has provided a platform for extremism and racism. The Vigilant Patriots page on Facebook pushes a vicious mix of agitprop and conspiracy theory. It has published calls to arrest, impeach, and execute Obama. A 2012 post declared that Obama must be arrested as a “terrorist” for “Treason, Espionage, Sedition and Fraud” and derided him as “an Illegal Commander-in-Chief.” A long anti-Obama rant from a member in 2011 called for hanging the “traitor.” A different member referred to Obama as “the muzzie usurping lying POS traitor.” (“Muzzie” is a derogatory term for a Muslim.) A group member in 2013 said Obama “must be tried, convicted, and executed as a traitor.” One member railed, Obama “still occupies the office because white members of Congress are too afraid of being branded racist to file Articles of Impeachment against him. It’s time to stop the charade. He is destroying America. Black, White, Green, Brown, or Purple, the man is a traitor. IMPEACHMENT NOW!”

One Vigilant Patriot offered this critique of Obama:

America is in danger of a complete take-over by the Muslim Brotherhood. Our military and governmental resources have been subverted to benefit the cause of Islamic Jihad…As RADICAL as that sounds, an Islamic take-over is the ONLY fact that snaps all of the puzzle pieces together and makes sense of the last 25 years of American History. Barrack Obama is a Muslim Brotherhood TRAITOR to America. He stands convicted in the eyes of all true American Patriots.

A group participant claimed that Obama wants to “enforce Marshall [sic] law” to stay in the White House.” And one post contended that US troops were purposefully bringing back Ebola from Africa.

There’s a lot of hate among the Vigilant Patriots. A participant assailed Obamacare as “totalitarian socialist” and claimed that Rahm Emanuel, an Obama aide who became mayor of Chicago, had “justified mistrust of Jews by the KKK.” Another proposed putting the “criminal news media into prison” (with Obama and Hillary Clinton). One post suggested adopting the Confederate flag as a symbol of resistance. Another declared that the Koran is a “declaration of war on you, your family, your friends, all you hold dear.”

Mother Jones sent a Trump spokeswoman and Trump’s presidential transition team a request for comment and a series of questions. The questions included the following: Did Bannon create this Facebook account? Does he personally control the account? Why did he apparently join the Vigilant Patriots group? Does he agree with the views expressed on this Facebook page? Does Donald Trump believe it would be appropriate for his senior staff to associate with a group that promotes racist material and death threats directed against Obama? The Trump spokeswoman and the transition team did not respond.

Bannon appears to have been rubbing Facebook elbows with racists and haters. On Thursday morning, Kellyanne Conway, Trump’s campaign manager, said Bannon “treats everyone kindly” and “has the ear and trust” of Trump. For those claiming Bannon is getting a bum rap on the white nationalist issue, this Facebook connection between Bannon and the Vigilant Patriots will not make their work any easier. 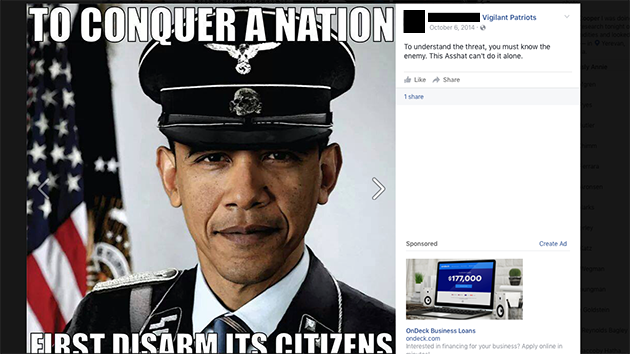 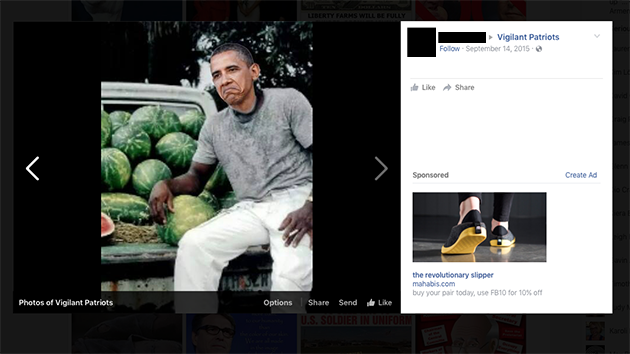 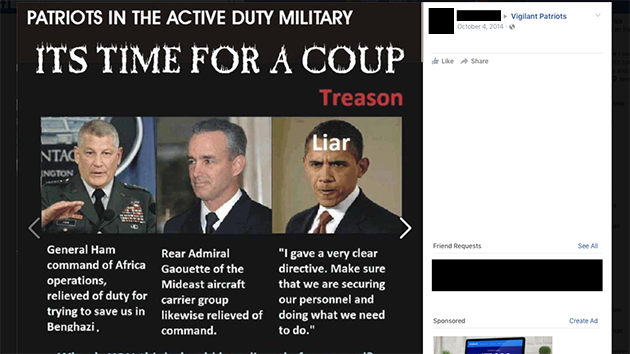 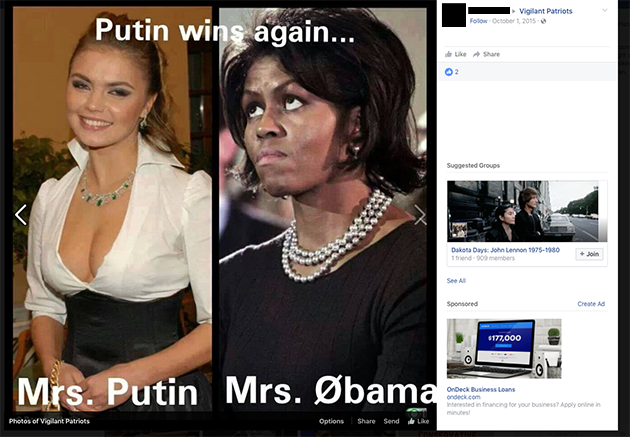 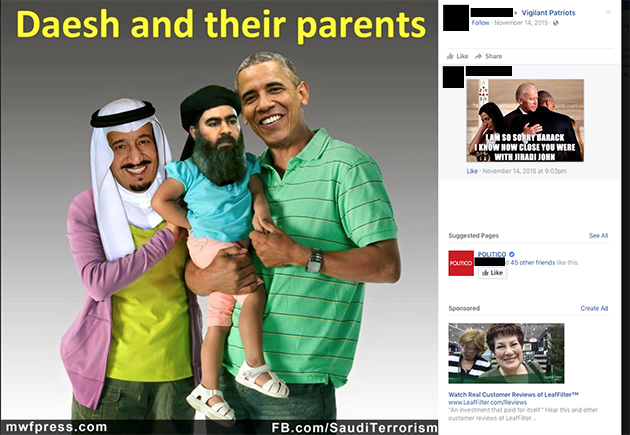 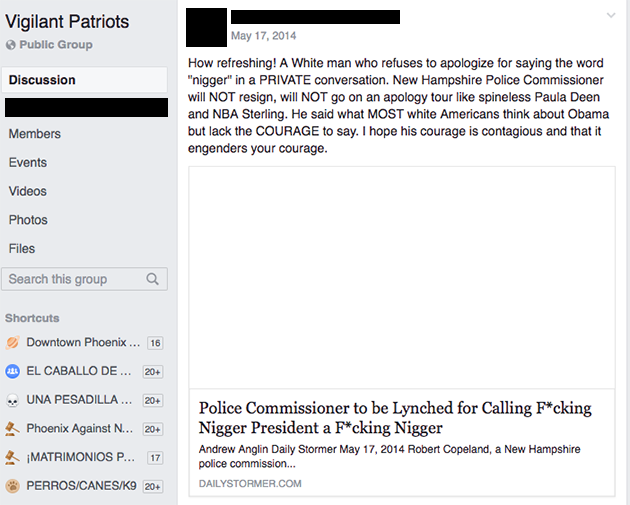