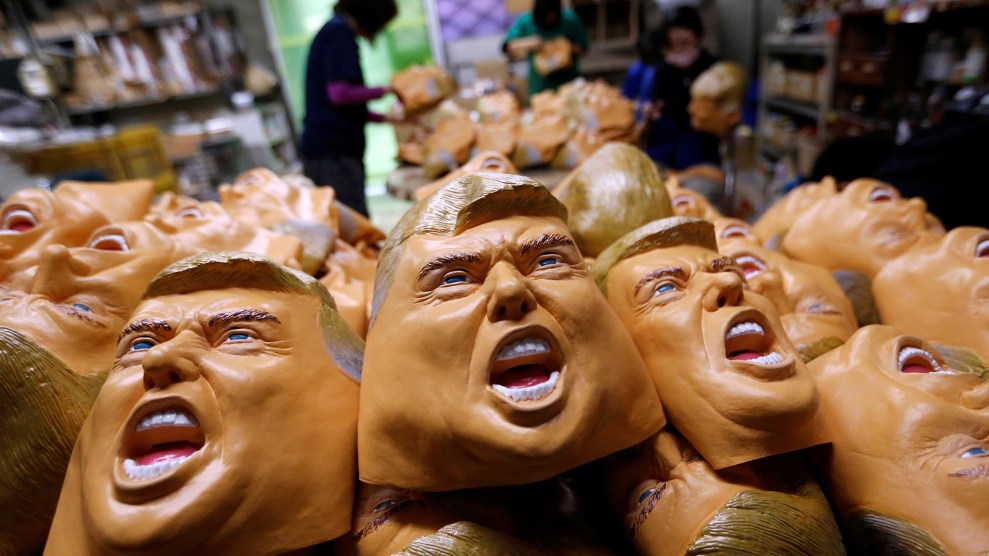 On the Sunday after Thanksgiving, as part of a multi-tweet rant against Green Party candidate Jill Stein’s recount effort in Wisconsin (and perhaps Michigan and Pennsylvania), President-elect Donald Trump questioned the integrity of the 2016 election.

In addition to winning the Electoral College in a landslide, I won the popular vote if you deduct the millions of people who voted illegally

Trump won 306 Electoral College votes to Clinton’s 232 (Michigan’s 16 were called for him today); so his victory was not exactly a landslide. But the bigger lie was that “millions” of people voted illegally, for which there is no evidence. Clinton’s lead of more than 2 million votes in the popular vote, and her campaign’s recent announcement that it would participate in the recount organized by Stein, seemed to have inspired yesterday’s tweet. But its origins trace back to a right-wing conspiracy theory that began to take hold shortly after the election.

According to the Washington Post, on November 13 Gregg Phillips, a former Texas Health and Human Services Commission deputy commissioner, tweeted that he had “verified more than three million votes cast by non-citizens.” He wrote that he was joining with True the Vote, a conservative group, “to initiate legal action.” The day after Phillips’ tweet, his claim was picked up by Infowars and a series of right-wing commentators and websites. True The Vote issued a statement Monday saying it “absolutely supports” Trump’s “recent comment about the impact of illegal voting, as reflected in the national popular vote.” In an email to Mother Jones on Monday, Catherine Engelbrecht, the founder of True the Vote, said a study of data was forthcoming. “We do have evidence that non-citizens are being registered and are voting,” she added, but she wouldn’t elaborate.

If Trump got his information for this weekend’s tweet from Infowars, it wouldn’t be the first time Team Trump cited this bizarre and unreliable source. Infowars, a conspiracy theory website run by Alex Jones, has been one of the Trump campaign’s go-to sources of information. On September 8, the candidate’s son Donald Trump Jr. tweeted the Infowars story “Was Hillary Wearing an Earpiece During Last Night’s Presidential Forum?” Trump himself has used the site’s work to bolster way-out claims, including his references to Clinton’s alleged poor health and his false assertion that “thousands and thousands” of American Muslims were celebrating the 9/11 attacks in New Jersey. Trump appeared on Jones’ internet-based talk show in December 2015 and told him, “Your reputation is amazing. I will not let you down.” Roger Stone, a longtime Trump adviser and a conspiracy theorist who claims LBJ killed JFK, has often appeared on Infowars, and he held joint events with Jones at the Republican convention in Cleveland in July. At that convention, Jones had “special guest” credentials.

Following the election, Jones claimed that Trump called to thank him and his listeners “for fighting so hard for Americans, and for Americanism.” A spokeswoman for Trump did not respond to a request for comment.

The Trump relationship to Jones and Infowars is one of the weirdest aspects of the 2016 election. Jones’ Infowars site offers up a steady stream of red meat for the conspiratorial far right. It claims that the US government was complicit in the 9/11 attacks and that the Sandy Hook massacre was “completely fake.” (It claims those children weren’t killed, and the whole thing was a ruse to make it easier for the government to push gun control.) On Monday, the site promoted Jones’ theory that the Stein recount is a means for Democratic donors to make Trump “illegitimate to cause a civil war in this country.” Another post titled “HUGE #PIZZAGATE NEWS COMING” hyped a discredited story about a Washington, DC-based pedophilia ring connected to Clinton operating out of a pizzeria. A third story maintained that Clinton has a plan to overturn Trump’s win.

Put simply, the president-elect is calling into doubt the election because of a conspiracy theory website known for pushing the most outlandish claims. Trump’s connection to Jones did not gather much attention during the campaign. But with this latest tweetstorm, Trump has indicated that he is still hobnobbing with these dark and paranoid forces—one sign that the conspiracy peddlers of Infowars will require close watching in the Trump years ahead.