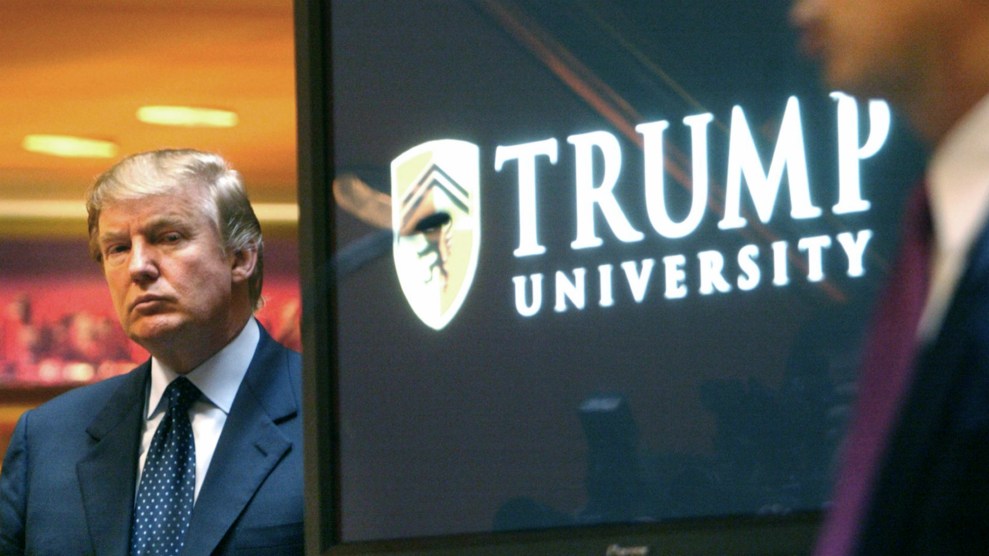 Update November 18, 4:15 p.m.: New York state attorney general Eric Schneiderman announced that Donald Trump has agreed to a $25 million settlement in the lawsuits against Trump University. In a statement, Scheinderman called the settlement “a stunning reversal by Donald Trump and a major victory for the over 6,000 victims of his fraudulent university.”

In a March debate with his Republican primary opponents, Donald Trump was unequivocal: The fraud accusations against him for his involvement with Trump University were completely false and he would never settle the case. Even as Marco Rubio taunted Trump about the case and Fox News moderator Megyn Kelly pressed him on the facts—there were more than 5,000 plaintiffs in the class-action lawsuit, she noted—Trump dismissed the idea there was anything to the case or that he would settle it.

“I don’t settle cases,” Trump said. “I don’t do it because that’s why I don’t get sued very often, because I don’t settle, unlike a lot of other people.” He added, “You know what, let’s see what happens in court.”

Trump’s lawyers are due in court on Friday morning—and it looks like they might be on the verge of settling.

Trump’s insistence that he would never settle the case extended far beyond that presidential debate. Before the debate, Trump had taken to Twitter to assail the idea he would settle.

The phony lawsuit against Trump U could have been easily settled by me but I want to go to court. 98% approval rating by students. Easy win

For months, long after Rubio had been vanquished, Trump remained fixated on the case and his desire to take it to court. He went so far as to bash one plaintiff who he said was trying to end the case early.

The primary plaintiff in the phony Trump University suit wants to abandon the case. Disgraceful!

His fury over the case even led him to attack the judge in two of the three lawsuits related to Trump University. Gonazalo Curiel was born in Indiana, but Trump derided him for his Mexican ancestry, which Trump claimed made him unfit to hear the suits.

I should have easily won the Trump University case on summary judgement but have a judge, Gonzalo Curiel, who is totally biased against me.

A trial in the two cases Curiel oversees is scheduled to start on November 28, and Trump’s lawyers are due in Curiel’s court on Friday morning to argue for a delay in the proceedings until after Trump is inaugurated. But the New York Daily News is reporting that Trump is very close to settling the third case, brought against him by New York Attorney General Eric Schneiderman. That would probably lead to a settlement in the two civil cases as well. According to the Daily News, the settlement may be between $25 million and $30 million. That’s a significant sum even for Trump, whose actual income is likely far less than he has publicly stated. But the cost to Trump may be even greater, after he staked his credibility on his repeated insistence that he would never settle a case he claimed he could easily win.