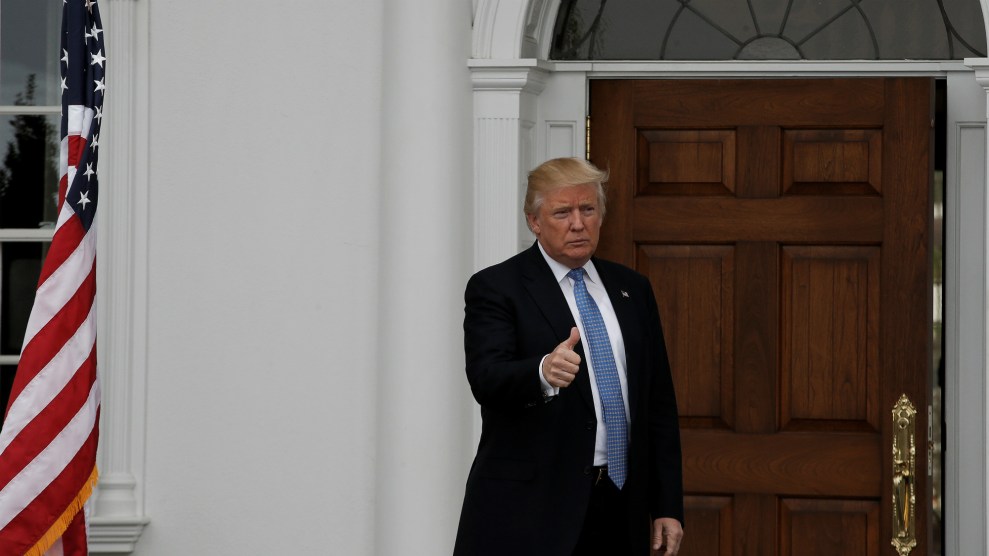 Donald Trump pledged on Wednesday morning to divorce himself from his business operations that threaten to bring enormous conflicts of interest to the Oval Office. In a series of tweets, Trump promised a major press conference on December 15 at which he will reveal “legal documents” that will completely remove him from “business operations.” He provided no details. But his comments indicate he’s not looking at anything different from what he has already proposed—and government ethics experts have said that’s unlikely to address the huge problem at hand.

These experts have pointed out that Trump’s sprawling business empire poses numerous conflicts with his imminent role as president. These include a lease for a government-owned building (which houses Trump’s Washington, DC, hotel), numerous overseas investments in countries such as Turkey and the Philippines (where US foreign policy is under pressure), and massive loans from Deutsche Bank and the state-owned Bank of China.

Trump has previously addressed concerns about his many conflicts by saying his children will run his businesses once he moves into the White House. That is what his recent tweets suggest he will do. Kellyanne Conway, his campaign manager, said on Wednesday morning that his kids will be given more control of the family company. Yet ethics experts have repeatedly said a transfer of responsibility to his children will not alleviate the conflicts.

The issue is the ownership of the businesses, not Trump’s daily role in the operations, says Richard Painter, a former White House ethics lawyer under George W. Bush and a leading critic of Trump’s conflict of interests. “He needs to divest ownership completely, or most all of the problems remain,” Painter says. In other words, as long as Trump maintains an ownership interest, the conflicts will remain. This would be especially true if family members were overseeing these assets. One family member—Trump’s son-in-law Jared Kushner, who is married to his daughter Ivanka—may end up with a senior position in the White House.

With the exception of a few real estate partnerships, Trump has near-complete ownership of almost everything in his portfolio, from Trump Tower in New York City to his golf courses around the world. Even in the places where Trump is only licensing his name or managing a hotel for a third party, personal financial disclosures show that Trump usually has 99 percent ownership of the corporate entity that is being paid by the partner. Trump’s children own little of the family business empire. The one significant stake the Trump children seem to hold in Trump’s many business interests is a shared 22.75 percent stake in his Washington, DC, hotel. (Trump is the managing member and holds the controlling interest in the project.)

Rep. Elijah Cummings, the ranking Democrat on the House’s oversight committee, released a statement on Wednesday echoing Painter’s assessment. He noted that Trump should divest himself from his ownership stake in his many companies, put his assets under the control of an independent CEO, and make public his tax returns and financial statements so separation between Trump and his assets can be confirmed.

“Experts on both sides of the aisle have warned that removing himself from his company’s business operations is not even close to removing himself from the financial benefits and other conflicts of interest they pose,” Cummings said. “The worst option—and the one he has offered publicly—would be to allow his children to run the company as they continue to offer political advice and obtain unprecedented access to governmental decision-making, and then return it to him after he is no longer president.”

Cummings has requested that the oversight committee’s chairman, Republican Jason Chaffetz, investigate Trump’s personal finances and how they might intersect with the public interest. Despite pre-election promises to do so, Chaffetz has remained silent on the matter.