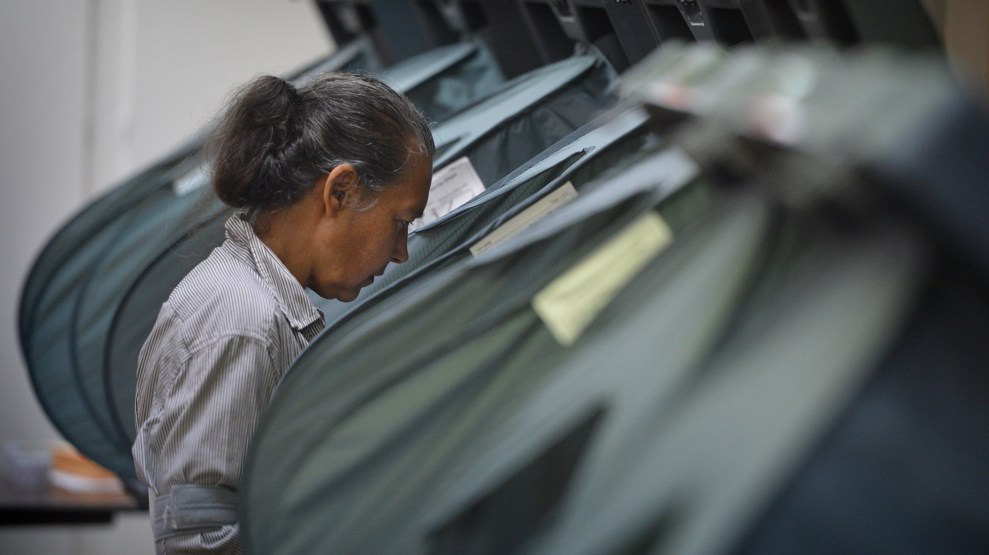 Two weeks after Election Day, voting rights advocates are taking stock of the issues that plagued the 2016 election cycle—barriers to registering to vote, access to the ballot box, confusing new laws and court cases—and looking ahead to the battles to come. Sen. Jeff Sessions of Alabama, Trump’s pick for attorney general, has a troubling record when it comes to voting rights, only adding to the post-election worries among voting rights supporters.

“As bad as it was after Shelby and in this election, at least we had a Civil Rights Division which took these concerns somewhat seriously,” said Scott Simpson, the director of media and campaigns for the The Leadership Conference on Civil and Human Rights. “And we don’t know what we’re going to get under Sessions. But we can look at his record, and his record bodes very poorly for the future of voting rights in this country.”

“Shelby” is Shelby County v. Holder, the June 2013 Supreme Court decision that struck down a key provision of 1965 Voting Rights Act used to determine which voting jurisdictions would have to pre-clear any changes to voting procedures or laws with the US Department of Justice or a federal court. Without it, nine states and parts of six others with a history of racial discrimination related to voting were allowed to make changes as they saw fit. “The election, at least for communities of color, started in June 2013,” Simpson says. “The Shelby decision is when this election began for people of color.”

In all, 14 states had new voting laws on the books for the first time in a presidential election, ranging from strict voter ID to curtailed early voting locations, according to the Brennan Center. The impact of those new laws on the outcome of the election is unclear, but Richard Hasen, an election law expert at the University of California-Irvine, says that the problems they created for voters is obvious to anybody paying attention.

“Even if these restrictions had no outcome on the election, it’s fundamentally immoral to keep people from voting in a democracy.”

“This election, compared to the 2012 election, featured more people who had greater difficulty registering and voting thanks to a series of laws passed by Republican legislatures in the last few years,” Hasen says. The true impact of the laws still needs to be studied, but “there’s no question that some people were disenfranchised by laws that seemed unnecessary to serve any real, legitimate purpose.”

Shelby is just part of the story, Hasen adds. The current state of play for voting rights was also forged in 2008, after the Supreme Court ruled in favor of voter ID in Crawford v. Marion County Election Board. In that case, a group challenged a 2005 Indiana voter ID law, but the Supreme Court ruled three years later that any inconvenience to Indiana voters did not outweigh the state’s interest in preventing voter fraud.

Even without detailed turnout and disenfranchisement data on the 2016 election, some things are already clear. As reported by the Nation’s Ari Berman, 300,000 voters in Wisconsin lacked the recently required strict form of voter ID and voter turnout in the state was at its lowest level in 20 years. “Even if these restrictions had no outcome on the election, it’s fundamentally immoral to keep people from voting in a democracy,” he wrote.

Then there are the nearly 6 million people across the US barred from voting due to prior felony convictions, according to an estimate by the Sentencing Project, a criminal justice reform group. And a November 2016 study by the Leadership Conference Education Fund—part of the Leadership Conference on Civil and Human Rights—found that at least 868 polling places had been closed in counties across seven states previously covered by Section 5 of the Voting Rights Act. And that was just the voting sites for which they could find reliable data.

There were also sporadic reports of voter intimidation at polls in various places—a serious concern after Trump called on his supporters to “watch” the polls Philadelphia, Chicago, and St. Louis to prevent voter fraud. In Spring, Texas, a man wearing a Trump hat and carrying a holstered gun posted an offensive sign outside a voting location and was briefly detained before leaving the location. In Coral Springs, Florida, Clinton campaign workers reported Trump supporters blocking an entrance to a polling location. But overall, reports of intimidation weren’t as prevalent as feared, says Myrna Pérez, the Deputy Director of the Brennan Center’s Democracy Program and leader of the center’s Voting Rights and Elections project.

Going forward, the picture is also murky. Civil rights activists’ concerns about a lack of commitment to federal enforcement of civil rights laws under a Trump administration only heightened with the possibility of a Department of Justice with Sessions in charge. There will be some organizing at the state and local levels—which is where the bulk of election policy is set—but advocates and some in Congress will also push to restore parts of the Voting Rights Act by introducing legislation.

Rep. Jim Sensenbrenner (R-Wisc.), a member of the House Judiciary Committee, proposed a bill in 2015 to restore the preclearance section of the Voting Rights Act, but instead of restricting preclearance to states with histories of voter suppression, his bill would require it for every voting jurisdiction in the country. The bill has bi-partisan support but has stalled and is unlikely to move forward during the lame-duck session. In a Nov. 2 Washington Post op-ed, just before the election, the conservative Republican argued that the country was “suffering” from Congress’ failure to act after the Shelby decision. “Without the full law in place, Americans face unnecessary legal battles, confusion, and inefficiency at the polls, and a potentially discriminatory election process,” he wrote.

A Trump White House and a Republican congress might doom the measure, but Simpson, from the the Leadership Conference on Civil and Human Rights, isn’t so sure.

“We have gotten a Voting Rights Act through Republican congresses with a Republican president,” he says. “Times are clearly different, and we have to keep on banging the drum and making very clear that this is not tolerable in American society in the year 2016.”

Pérez from the Brennan Center isn’t as confident.

“We don’t know what this congress is going to look like,” she said. “Voting and voting rights used to be something that wasn’t partisan. It has enjoyed a tremendous amount of bipartisan support in the past years, but voting rights has become increasingly polarized.”

There is also a growing push for automatic voter registration, in which eligible voters are immediately registered when they interact with certain government agencies—when they get or renew a driver’s license, for instance. Oregon became the first state to employ the system in 2015 and was followed later that year by California. Vermont, West Virginia, Connecticut, and Alaska joined the list in 2016, and more than two dozen other states considered the practice in 2016, according to the Brennan Center.

Pérez also points to bipartisan support for updating voting technology, which in most states is more than a decade old and can be unreliable. The problem there isn’t political opposition, it’s funding. States kick the responsibility to local jurisdictions, which in most cases don’t have the money. If the money can be found, Pérez said, the support is there to upgrade the equipment.

“It doesn’t matter what political party you belong to,” she says. “Nobody wants to hear voters screaming and yelling about the voting machines being broken.”

After Trump selects the Supreme Court Justice to succeed Antonin Scalia, the court will likely not be as supportive of voting rights as a Clinton Supreme Court might have been, Hasen says. Especially if the Supreme Court decides to take up challenges to lower court rulings striking down voter ID laws in Texas and North Carolina.

“I would have hoped there would have been a progressive Supreme Court in place next few years that could have provided a backstop to reigning in some of the worst efforts to try and register to vote,” he says. “But that does not look like it’s in the cards thanks to the last election.”

To Simpson, the key going forward is to get more people to appreciate that vote suppression, no matter the form it takes, deserves attention and needs to be fixed.