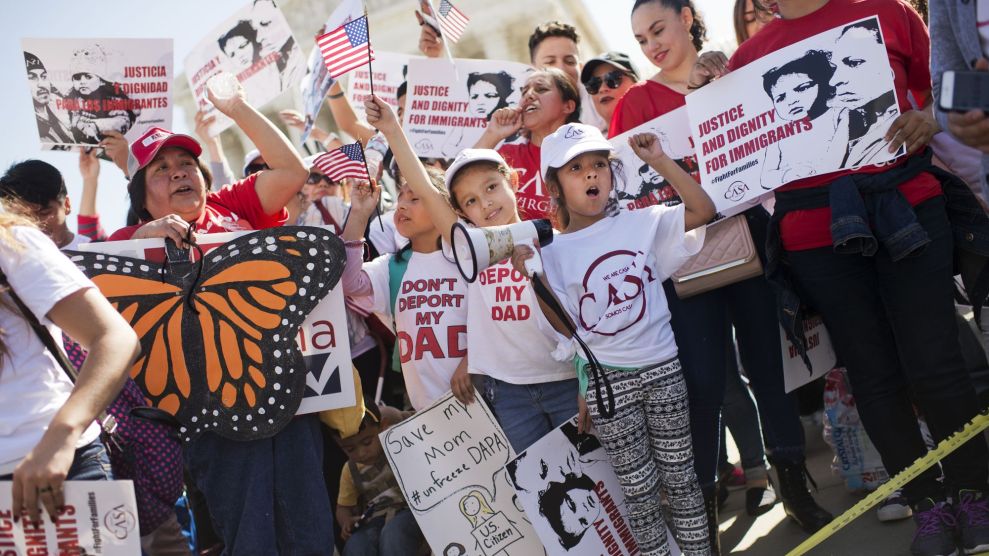 Throughout his presidential campaign, Donald Trump ran on a staunchly anti-immigrant platform, vowing to build a wall along the US-Mexico border and deport millions of “criminal aliens” in his first hours in office. Last week, Democratic legislators in California—home to about one-fifth of the country’s estimated 11 million undocumented immigrants—introduced a series of measures aimed at protecting the state’s immigrants under Trump’s policies. Two of those bills could help immigrants facing deportation in a crucial way: by making sure they have legal representation in court.

Unlike defendants in criminal courts, immigrants facing deportation aren’t guaranteed a right to a court-appointed attorney. These immigrants have to bear the costs of securing a lawyer on their own, and this can be a costly and difficult process, especially for those held in detention centers. Nationally, only 37 percent of immigrants facing deportation proceedings have access to a lawyer, according to a study released by the American Immigration Council, a pro-immigration nonprofit. Immigrant detainees have it even worse: Only 14 percent receive legal representation. Studies have shown that one of the most important factors in determining an immigration case is whether immigrants had a lawyer—women and children, for instance, are up to 14 times more likely to win some form of relief from deportation or be released from detention when they have access to legal representation.

California’s proposed laws “send a clear message to undocumented Californians that we won’t turn our backs on them. We will do everything in our power to protect them from unjustified deportation.”

Together, California’s Assembly Bill 3 and Senate Bill 6 would provide funding so immigrants facing deportation would have access to free legal assistance, as well as set up state-funded trainings in immigration law so defense attorneys and public defenders’ offices can better assist immigrants. Nearly 70 percent of detained immigrants in the state do not have legal representation, according to a report by the California Coalition for Universal Representation, and without it, only 6 percent of immigrants have won their cases over the past three years.

State Sen. Ben Hueso, a Democrat from San Diego who introduced SB 6, estimates that the state could allocate between $10 million and $80 million to fund these efforts. The measures “send a clear message to undocumented Californians that we won’t turn our backs on them,” said Hueso. “We will do everything in our power to protect them from unjustified deportation.”

The measures would require a two-thirds majority to be enacted, and with Democrats holding the majority in the state Legislature, the bills are likely to pass. Gov. Jerry Brown has yet to comment specifically on the legislation, taking a more cautious tone at a press conference last week, according to the Los Angeles Times. “I’m going to take it step by step and work in a collaborative way, but also defend our principles vigorously,” Brown said. “I think that’s the wiser course of action.” The measures will be voted on next month.

California could become the second state to help fund legal assistance for immigrants facing deportation, following an approach first implemented in New York: In 2013, nonprofit groups in New York City piloted a program that gave free representation to immigrants who couldn’t afford lawyers at one of the city’s immigration courts. Within a year, attorneys in the project won almost 70 percent of their cases, and the approach was so successful that the city fully funded the program. The model inspired similar programs in New Jersey, Chicago, Los Angeles, and San Francisco.

“We have to provide representation for any noncitizen facing deportation proceedings. That’s how fairness works.”

Despite a recent interview in which Trump appeared to soften his stance toward deporting so-called Dreamers, or young immigrants brought to the United States illegally as children, immigration advocates say they are preparing for a mass deportation plan under his administration. Shortly after the election, Trump insisted he would deport immigrants who had committed crimes, saying he still planned to remove some 2 million to 3 million undocumented immigrants immediately. (A Migration Policy Institute report found that about 820,000 undocumented immigrants had criminal records, but some advocates worry Trump will broaden his definition of a “criminal” immigrant to include people who have been arrested—though not necessarily convicted of a crime—to gain popular support for deportations.) And his nomination of Jeff Sessions as attorney general and appointment of Kris Kobach as an immigration adviser to his transition team have also concerned immigration advocates.

Francisco Ugarte, a public defender in San Francisco, where community groups and the city’s public defenders have asked the city to set aside $5 million for free legal assistance, says the funding is desperately needed. “We have to provide representation for any noncitizen facing deportation proceedings,” Ugarte says. “That’s how fairness works.”