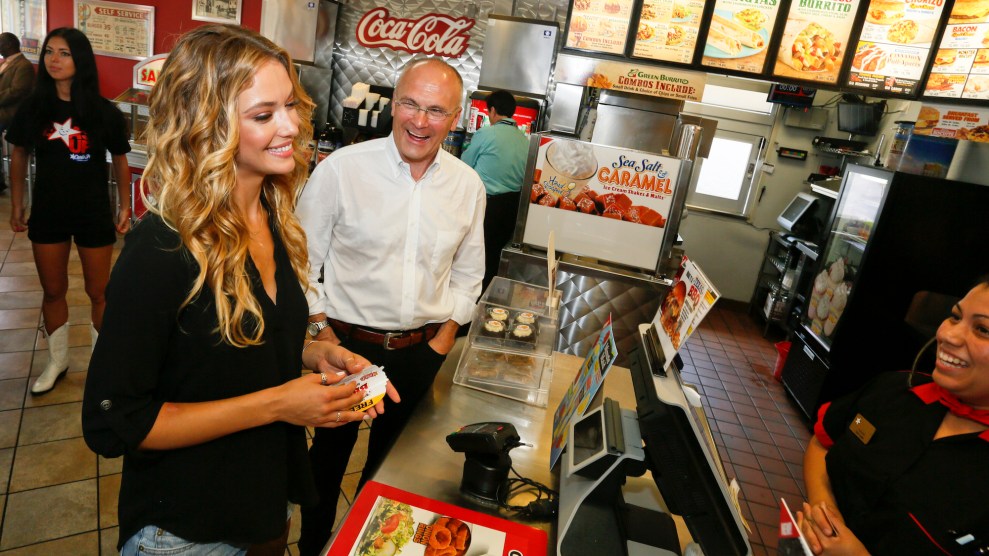 Not once but twice during his campaign, President-elect Donald Trump opined that US workers are overpaid. On Thursday, he put the weight of the federal government behind that complaint, by appointing as labor secretary a fast-food magnate who seems to take management cues from Ebenezer Scrooge.

Unlike workers, machines are “always polite, they always upsell, they never take a vacation, they never show up late, there’s never a slip-and-fall, or an age, sex, or race discrimination case,” Puzder gushed to Business Insider.

Andy Puzder is the CEO of CKE Restaurants, parent company of fast-food chains Hardee’s and Carl’s Jr. Since CKE is privately held, his compensation isn’t publicly disclosed, but in 2012—according to CKE’s final public disclosure after going private—Puzder made more than $4 million in salary and bonuses. Meanwhile, he has been a tireless campaigner against raises to the minimum wage and rules proposed by President Barack Obama in 2014 that would expand the number of employees who qualify for overtime pay.

It’s not surprising that Puzder, who has been CEO of CKE Restaurants since 2000, would have strong opinions about overtime. Back in 2004, the company agreed to pay $9 million to settle claims that it had not paid overtime to store managers. In 2013, CKE was hit with a class-action suit for “allegedly failing to pay its general managers overtime, even while requiring them to be on call 24 hours a day,” reports Law 360. The suit is still pending, with a hearing scheduled for December 14 in Los Angeles.

In response to widespread efforts to boost the minimum wage at the state and local levels, Puzder vowed earlier this year to replace workers with machines. “They’re always polite, they always upsell, they never take a vacation, they never show up late, there’s never a slip-and-fall, or an age, sex, or race discrimination case,” he gushed to Business Insider.

A frequent writer of opinion pieces, Puzder argued in an October 2014 Wall Street Journal article that rather than raise the minimum-wage, policymakers should look to North Dakota and its booming shale oil fields as a model for generating high wages. Not long after Puzder penned those words, the North Dakota oil boom went bust; jobs evaporated and wages plunged.

As labor secretary, Puzder will certainly not be able to ignore the industry he will leave behind. According to the Economic Policy Institute, the restaurant industry employs 10.6 million people—accounting for 9.9 percent of all private-sector employment among women and 8.4 percent among men. The pay, to use a technical term, sucks:

News of Puzder’s appointment did not go over well within the growing movement to improve wages and conditions in restaurant work. “An avowed enemy of restaurant industry reforms, Puzder’s past is riddled with class-action wage theft lawsuits, sexist remarks, and falsehoods that paint wage increases as ‘job killers,’ minimum-wage earners as entitled teenagers, and his own employees as lazy welfare recipients,” Saru Jayaraman, co-founder and co-director of the Restaurant Opportunities Centers United (ROC United), told me.

To be sure, Puzder is no one’s idea of a feminist. Before he emerged as a burger mogul, he was a key figure in the anti-abortion movement, and he even wrote the Missouri abortion law that the Supreme Court upheld in its 1989 Webster v. Reproductive Health Services decision, reports Mother Jones‘ Hannah Levintova. She adds: “This was a seminal case that allowed states to impose far more restrictions on abortion care than had previously been permitted under Roe v. Wade, including limits on the use of public funds and facilities for abortion care.”

Also in the 1980s, Puzder’s first wife accused him of abuse in divorce hearings, “with police twice summoned to the couple’s home,” reports the Riverfront Times. Puzder denied the charges at the time, and on Thursday he provided the Riverfront Times with a recent email from the ex-wife walking back the abuse claims.

Like the man who appointed him labor chief, Puzder apparently likes to be associated with scantily clad women. Carl’s Jr. and Hardee’s pursue what Entrepreneur Magazine calls a “supermodel-centric marketing strategy, which launched in 2005 with a commercial of Paris Hilton sensually washing a Bentley in a bikini.” (Hat tip the American Prospect’s Justin Miller.) Here’s an example of a Carl’s Jr online ad that the company calls “Too Hot For TV”:

“I like our ads,” Puzder told Entrepreneur. “I like beautiful women eating burgers in bikinis. I think it’s very American,” he went on. “I used to hear, brands take on the personality of the CEO. And I rarely thought that was true, but I think this one, in this case, it kind of did take on my personality.”