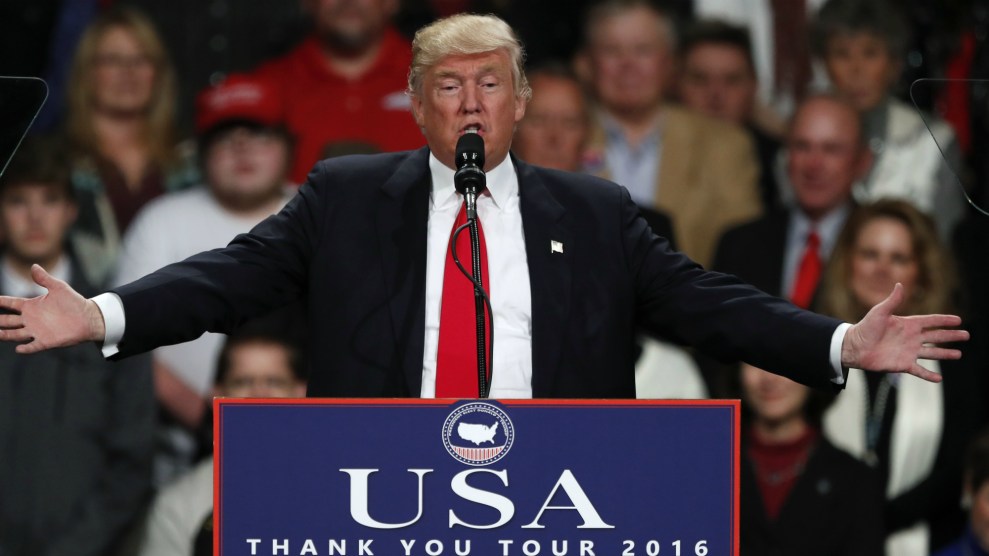 A bipartisan coalition of Washington ethics watchdogs—including one of Hillary Clinton’s most vocal critics—is calling on President-elect Donald Trump to divest himself of his sprawling business interests.

“By combining your presidency with your family business enterprises, you will create ongoing conflict of interest and credibility problems for your presidency,” reads an open letter the group sent to Trump Friday. “Questions will regularly arise as to whether your domestic and foreign policy positions are being taken on behalf of the interests of the American people or the financial interests of the Trump family, which will necessarily diverge on numerous occasions from those of the nation as a whole.”

The letter was signed by 29 different individuals and groups. The list contains a who’s who of Washington watchdog groups. It also includes six former Republican elected officials and Richard Painter, who served as the top ethics lawyer in George W. Bush’s administration. But perhaps the most eye-popping name on the list is Peter Schweizer, the head of the Government Accountability Institute—a conservative group whose board has included Trump adviser Stephen Bannon. Schweizer is the author of Clinton Cash, a best-selling book that was the basis for much of the controversy over Clinton’s involvement with the Clinton Foundation. Schweizer was particularly critical of the foundation’s acceptance of large gifts from foreign donors who appeared to be seeking favors from the Clintons.

Even before he has taken office, Trump’s transition effort has already been dogged by conflict of interest accusations, including questions as to why his daughter has sat in on meetings with foreign leaders and his involvement with hotels in Argentina, Turkey, China, and Taiwan.

Trump has said he will hold a press conference next week in which he will explain how he he will separate himself from the daily “business operations” of the Trump organization. But this won’t be enough, the letter says.

Although congressional Republicans have appeared reluctant to take any steps to investigate Trump’s personal finances, the letter’s signers urge Trump to take the issue seriously.

“Republicans and Democrats called for similar strong measures regarding the Clinton Foundation if Hillary Clinton were elected president,” the letter says. “It is no less important for you to take the steps set forth in this letter with The Trump Organization now that you will be entering the Oval Office.”

The full letter can be read here.