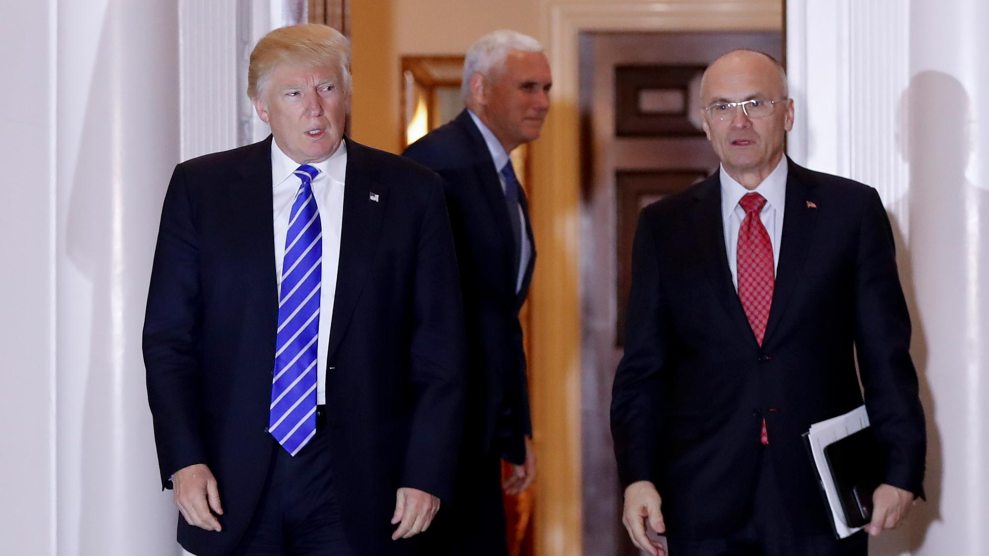 But reproductive rights advocates should also be concerned. Puzder has long opposed abortion rights and even wrote the Missouri abortion law that the Supreme Court upheld in its 1989 Webster v. Reproductive Health Services decision. This was a seminal case that allowed states to impose far more restrictions on abortion care than had previously been permitted under Roe v. Wade, including limits on the use of public funds and facilities for abortion care.

Trump has promised to appoint anti-abortion Supreme Court justices, and Vice President-elect Mike Pence has said he wants to “send Roe v. Wade to the ash heap of history.” Back in the ’80s, when he was a lawyer working in St. Louis, Puzder acted on similar convictions. In a 1984 article in the Stetson Law Journal, Puzder and another lawyer proposed that the Missouri Legislature pass a law defining life as beginning at conception in non-abortion contexts—in property or contract law, for instance. Puzder saw its purpose as mounting a challenge against Roe, which had legalized abortion a little less than a decade earlier. If the court recognized that a fetus had rights in contexts other than abortion, he reasoned, it created a foundation for challenging legal abortion down the line.

“This is not an abortion statute,” Puzder told the Chicago Tribune in 1989, three months before Webster was heard by the Supreme Court. “It is designed to make the Supreme Court face the question of deciding whether a state can decide when life exists.”

Puzder worked with Sam Lee, a local anti-abortion lobbyist, to move the proposal to the Legislature. The two got acquainted because Puzder had often helped get Lee out of jail following his arrests during sit-ins at abortion clinics “by arguing a defense of necessity,” noted the Tribune. “Lee had to break the law and trespass because he believed that life began at conception and that the only way to stop the greater crime was to limit access to the clinic. The defense almost always worked.”

The two added a slew of other abortion restrictions to the bill—including one prohibiting the use of public resources to provide or counsel on abortions—and soon it was signed into law in Missouri. The measure was challenged by a local abortion clinic, Reproductive Health Services, and provisions of the law were subsequently found unconstitutional by several appeals courts. Ultimately, in a 5-4 decision, the Supreme Court found that none of the bill’s provisions were unconstitutional, dealing a blow to abortion rights advocates—but the high court clarified their ruling should not be taken as a referendum on the original decision in Roe v. Wade. Now, Puzder will likely join an administration that plans to complete a mission he began 30 years ago.